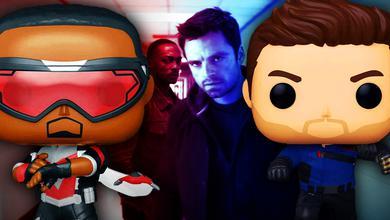 Marvel Studios’ new era of storytelling on Disney+ is finally inching closer to its arrival.

WandaVision set to debut on January 15, 2021, and is set to be followed by four more series, currently all in various stages of production. The closest to completion of those developing shows is most likely The Falcon and the Winter Soldier, which was finishing their international filming earlier this fall.

This series will help bring the MCU to a much more grounded level as fans catch up with Sam Wilson and Bucky Barnes in a 2023 post-Avengers: Endgame world. One of the biggest uncertainties concerning this series, however, is its premiere date on Disney+ due to such long delays in production.

No official confirmation for any drop date has come yet, although a new merchandising release may hold some clues as to when the MCU fandom should expect the series to arrive.

Entertainment Earth has officially started pre-orders on three new Funko POP! Vinyls from Marvel Studios’ new Disney+ series, The Falcon and The Winter Soldier. The three Pops feature the two lead characters of the show, Sam Wilson and Bucky Barnes, in full costume, as well as Baron Helmut Zemo decked out in his jacket and full purple face mask.

All three pops, which are slated to arrive in January 2021, can be seen below:

The Falcon Funko Pop can be pre-ordered here.

The Winter Soldier Funko Pop can be pre-ordered here.

The Baron Zemo Funko Pop can be pre-ordered here.

The most intriguing piece of this listing is that the Pops will be available next month, the same month in which WandaVision is set to premiere on Disney+. The series is currently in its final stage of filming with no indication toward a release timeframe, but with these new figurines coming so soon, it could be a sign that the series’ debut won’t be far behind.

WandaVision is rumored to consist of at least nine episodes, which if true, would see that show's season conclude on March 12. Disney+ and Marvel will almost certainly want this show to start after the complete run of WandaVision so both shows stand on their own, but the release date for these Funko Pops could mean that Marvel will want to push The Falcon and the Winter Soldier's premiere for as soon as possible.

Should WandaVision last the reported nine weeks, the earliest possible start date for The Falcon and the Winter Soldier would land on March 19, 2021. It will also be interesting to find out if any plot lines from Black Widow, set to release in theaters on May 7, will cross over with this series, considering how interconnected the new shows are said to be with the Phase 4 movies going forward.

The Falcon and The Winter Soldier is currently wrapping up production, but is still without a release date on Disney+. The series is confirmed to land on the streaming service sometime in 2021.