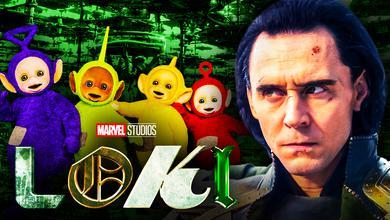 With less than four weeks to go until the premiere of Marvel Studios' latest Disney+ series, Loki, fans are getting more and more eager to discover what's in store for the time-traveling variant of Tom Hiddleston's God of Mischief.

There have been a few sneak peeks and hints about the series already, but there will be plenty more to come in the weeks ahead. A snippet from an upcoming interview has provided a bit more context on what fans can expect from the show, though it is already making some fans more confused (and potentially more excited) than they already were.

THE MANY INSPIRATIONS BEHIND THE LOKI SERIES

In a soon-to-be-published interview in Entertainment Weekly, via Twitter, Loki director Kate Herron revealed a few inspirations behind different aspects of the series - and some unexpected ones at that.

According to the article, some projects the show's creators took inspiration from while putting Loki together "include Blade Runner, Mad Men, and, most curiously, Teletubbies."

The article followed up by claiming Herron remained mum on the context behind the Teletubbies connection, saying that "[Fans are] just gonna have to wait until June 11."

This article was most likely conducted before the show's release schedule changing to Wednesdays, and the premiere to June 9.

WHAT DO THE TELETUBBIES HAVE TO DO WITH THE TVA?

Loki is shaping up to be a project like no other, much like fellow Disney+ series WandaVision. It's been made quite clear that it's going to be a time travel story and has also been described as a crime thriller, but the creative team seems to refuse to be bound by genre, taking inspiration from shows and movies of all kinds.

The name-drop of Teletubbies, though, is puzzling even for a show that is shaping up to be as wacky as Loki is.

The Teletubbies are children's television characters who appear to exist in a universe very different from the MCU, as vast and varying as it is and continues to be. It's possible the show's format or one of it's side characters like the notorious baby-faced sun or sentient vaccum cleaner Noo-Noo is the thing the creators have based something in Loki off of.

It's worth noting that the mysterious Miss Minutes is an anthropomorphization of a common item, in her case a clock, so there's a chance she is the aspect of the show Herron was referring to with the mention of Teletubbies.