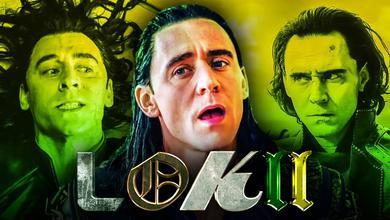 WARNING: This article contains spoilers for the season finale of Loki.

Tom Hiddleston's God of Mischief has taken quite the wild ride through space and time in his first solo series, Loki, on Disney+.

Season 1 ended with a literal jump into madness with the wild introduction of Jonathan Majors' Kang The Conquerer, throwing the MCU's multiverse into shambles with an infinite number of possibilities ahead. Loki and Sylvie may still both be alive, but their interaction with Kang will undoubtedly have its repercussions sooner rather than later.

Additionally, Episode 6 officially confirmed that Loki will be moving on to a second season after months of rumors pointing to this being true. Now that the God of Mischief appears to be out of the core MCU timeline, for the time being, the character has a wide-open path so long as he stays alive.

This potential is also there due to Hiddleston's enthusiasm to continue playing the role for an extended period of time.

Loki star Tom Hiddleston spoke with Deadline about his future as the God of Mischief within the MCU now that Season 2 has been renewed.

Hiddleston hinted at the idea of "all the kind of multiple alternate realities" that exist in the MCU.

Coming to terms that it's taken him "10 years to get a handle on this sort of mono timeline," he admitted that the idea of a multiverse is "actually beyond (his) knowledge of physics:"

"As I say, all the kind of multiple alternate realities are… it’s taken me 10 years to get a handle on this sort of mono timeline. The idea that this might be a multiverse is actually beyond my knowledge of physics."

As for the chances that he will continue playing Loki in any capacity, he learned to "make no assumptions" about continuing after "having said goodbye to the character more than twice."

However, Hiddleston still "(loves) playing him" and seems to "find new, interesting things about him...every time" he returns, renforcing his enthusiasm for a sophomore season:

"I have learned, at this point, having said goodbye to the character more than twice, two and a half times maybe, to make no assumptions. So, I’m also aware that I’m only playing him because of the audience, really. So, it’s not up to me. But I do love playing him, and every time, I seem to find new, interesting things about him. So, yeah, I’m a temporary passenger on Loki’s journey, but we’ll see. We’ll see where the ride goes now."

LOKIS ALWAYS SURVIVE IN THE MCU

The MCU is certainly known for having its regulars stick around for a long time, which can definitively be said about Tom Hiddleston with Loki holding his seventh appearance over the past decade. On top of becoming a fan favorite through his portrayals, it's great to hear that he's so willing to return for more action should Marvel have more stories for him to tell.

Even after having seemingly died at the end of Thor, Thor: The Dark World, and especially Avengers; Infinity War, the God of Mischief finds a way to live on and make the best out of insane situations. As one of the few characters to appear in each of the MCU's first four Phases, he can never be counted out for new projects.

Regarding Hiddleston's own grasp on the multiverse, it's clear that he's as in the dark on this concept as the entire MCU fandom at this point in time. With future entries like Doctor Strange in the Multiverse of Madness and Spider-Man: No Way Home hopefully clearing up some details, the Loki star will hopefully have the chance to expand on his own expertise in this matter.

All six episodes of Loki are available to stream on Disney+.