WandaVision Casts New Neighbor Character Who Might Be MCU's Hulking 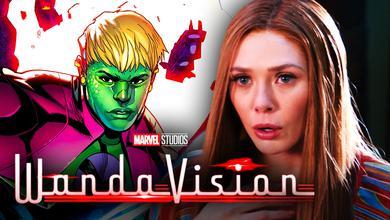 While Phase 4 of the Marvel Cinematic Universe is set to continue the stories of multiple holdovers from the Infinity Saga, the new slate of movies and Disney+ shows will bring the debuts for dozens of classic Marvel Comics characters. A few of these newcomers will headline their own series like Oscar Isaac in Moon Knight and Tatiana Maslany in She-Hulk, with others playing supporting roles for the time being.

A trend in casting for some of these Phase 4 characters is slowly, but surely, indicating that Marvel Studios is looking to bring the Young Avengers to life on the big screen. This can be seen with announcements for actors like Elijah Richardson as Eli Bradley/Patriot in The Falcon and the Winter Soldier, Dominique Thorne as Riri Williams in Ironheart, and Xochitl Gomez as America Chavez in Doctor Strange in the Multiverse of Madness.

Continuing with this current course, news has just come regarding a new cast member of the MCU’s first Phase 4 project, who has an important connection to this team of younglings.

In two new posts on Instagram, Isaiah Knott revealed that he is joining the cast of Marvel Studios’ WandaVision. His role is currently listed as an uncredited “boy next door," and there is no confirmed timeframe for when he will appear in the series.

Knott's first post is from January 15, which includes a picture of himself in a WandaVision sweatshirt with the following caption:

💥🏠📺 SURPRISE 📺🏠💥 had to keep this under wraps for a while but am excited to finally be able to announce that i had the incredible opportunity to be a part of @marvelstudios’ new series, @wandavision. to be involved in a MCU production (let alone a series dedicated to my favorite avenger) has been one of the most surreal/magical experiences & a dream come true. extremely grateful & ecstatic to join such a talented & “visionary” piece.
watch #WandaVision now streaming on @disneyplus!!! new episodes every friday — keep an eye out you might see a familiar face ;)

The second post came a week later on January 25, featuring an apparent still showing Knott's character in the series with the caption "an experience of a lifetime... thank you Marvel Studios."

UPDATE: Shortly after the publishing of this article, Knott's post was removed from his Instagram account. The image showed Knott's character wearing a collared dress shirt under a light sweater and smiling in front of a picket white fence.

COULD THE MCU'S HULKLING BE ON THE WAY?

Knott’s role is still a mystery, but there are a handful of signs pointing to Hulkling, one of Marvel Comics’ classic Young Avengers team members. Most of this speculation ties back to a rumor released over a year ago from the Illuminerdi, saying that Hulkling would be introduced in WandaVision.

Knott is either 23 or 24 years old, which fits right into the age range listed in the casting call.

Looking at the picture that Knott posted, it gives a feel relating back to the 2010s sitcom Modern Family, which is confirmed to be an inspiration for a later episode of WandaVision. This show deals with gay themes through its core cast of characters, which could also tie to Hulkling's relationship with Billy in the comics.

With over half a dozen members of the Young Avengers confirmed to arrive in the MCU in Phase 4, it makes plenty of sense that Knott would bring Hulkling into play. Similarly to Monica Rambeau, it’s unknown if he will already have his powers in this series or if they will come in a later appearance.

WandaVision is already a birthplace for Monica Rambeau before she turns into a superhero, and this casting would put WandaVision on another level on that front. Should Hulkling be Knott's role in the end, it should only be a matter of time until the MCU's Young Avengers assemble into a full-fledged team.

WandaVision will continue this week with Episode 5 premiering on Friday, February 5. There is no confirmed timeframe for Isaiah Knott's debut in the series.