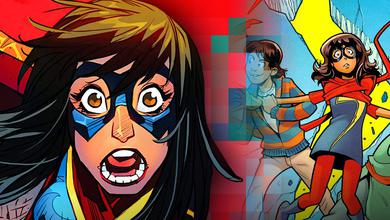 The Marvel Cinematic Universe fandom gets to continue its run of nearly daily celebrations today over Iman Vellani’s casting as Kamala Khan in Ms. Marvel. She is almost a complete mystery as she takes on the first major Hollywood production of her career, but the support for her casting has been overwhelming from fans and insiders alike.

Unfortunately in show business, this casting means heartbreak and disappointment for a number of other actresses who put in so much work trying to get this highly coveted role. This has manifested into an unexpected social media blast, and fortunately for fans, it comes with a leak from the audition process that was sworn to secrecy likely weeks or months ago…

A new post from Twitter user @LUSTFORLIVE revealed that out of frustration and anger due to missing out on the role of Kamala Khan, an unnamed actress released what appears to be her audition script for Ms. Marvel, which violated a signed non-disclosure agreement. Word is that the script is completely legit, describing a scene between Hana (Kamala Khan) and someone named Jacke having a meaningful conversation on a rooftop:

Anyone who works with Marvel Studios in any capacity, just like most major studios, agrees to sign some form of a non-disclosure agreement that prohibits them from sharing anything official about upcoming projects. This actress sharing the script most likely is a monumental violation of that agreement, and it will be interesting to find out if her name is ever revealed and what consequences come due to her actions.

In terms of the actual content of the script, it seems to set a scene from very early on in Kamala Khan’s career as a superhero. Not only does it give dialogue explaining how difficult Kamala’s life is having to fit into two different cultures along with living as a superhero, it even has references to the Winter Soldier with a huge black line through most of the lines.

It is still unclear whether a version of this script will actually be used in the final cut of Ms. Marvel, but it’s still exciting to see ideas of how Marvel Studios is setting up this brand new superhero. It shows just how interwoven the new Disney+ shows will be with everything that has happened in the MCU films thus far and how far the studio is going to make sure Kamala’s story is told the right way.

Ms. Marvel is set to film from November 2020 to March 2021. The Iman Vellani-led mini-series is scheduled to premiere on Disney+ sometime in 2022.