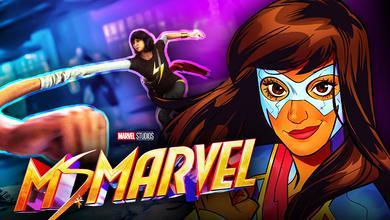 The Marvel Cinematic Universe is kicking off Phase 4 largely with projects centered around long-standing heroes for both its upcoming movies and its new run of series on Disney+. This is currently the case with Tom Hiddleston's Loki, whose first two episodes are now streaming, and it will continue in theaters next month with Scarlett Johansson's Black Widow.

This is set to change in a big way on Disney+ later this year when Iman Vellani's Kamala Khan makes her MCU debut in the Ms. Marvel series.

Having gained immense popularity from her recent comic runs over the 2010s and her starring role in the Marvel's Avengers game, Kamala's impact on the MCU will be something to behold in just a few months. While no story details have leaked yet, some set photo leaks have teased some exciting action and a continuing trend of comic-accurate live-action costumes as well.

Kamala will get to be deeply involved in that costume trend, which is shown once again through the latest leak.

One features Iman Vellani in her full costume standing in front of a huge crowd during a nighttime shoot.

Another captures an image of her using her superpowers to defend Rish Shah's Kamran, who is nursing an injury as Kamala faces off against the police.

They also indicate that Kamala will, in fact, be utilizing some kind of purple lightning-based powers in this scene, which is a slight deviation from her powers in the comics. There are no signs pointing to how these powers come into the show, but they will undoubtedly come in handy through whatver trouble Kamala finds herself in.

While it's unclear what exactly is happening in the scene being shot, Iman Vellani looks immaculate with the MCU's interpretation of the Ms. Marvel costume. The red and blue combination looks to be shining through well even through an average camera lens, and the lightning bolt will undoubtedly get its due focus as the stretchy hero goes into battle.

It will be interesting to find out what leads Kamala and Kamran into this apparent duel with police, which will likely happen later in the series with Kamala in this particular costume. Could it be something having to do with both of their Inhuman abilities? Could Kamala end up framed? These questions and more will be put on the table seeing the duo in action.

Regardless of what happens in the story, the stage is set for this series to introduce a thrilling new story centered around the MCU's first new leading hero from Phase 4 on Disney+. Her origin story will be something fun to follow, especially considering she's as big of an Avengers fan as anybody, and fans are already looking forward to seeing how this adventure sets her up for her appearance in 2022's The Marvels.

Ms. Marvel has completed filming and will debut on Disney+ later this year.