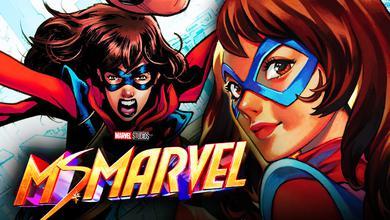 The anticipation surrounding Ms. Marvel is high mainly due to the fact that it will introduce the MCU's first Pakistani hero in the form of Kamala Khan. The character will be played by newcomer Iman Vellani, and she will be joined by a string of characters from the pages of Marvel Comics such as Red Dagger and Kamran.

Plot details are still being kept under wraps, but the sizzle reel that was unveiled during Disney Investor Day confirmed that the core narrative of the series will largely focus on the heroic origins of Kamala. In addition, the character's admiration for the MCU's well-established heroes will also serve as a story beat that Ms. Marvel will explore.

Just Jared released a new batch of set photos from the filming of Ms. Marvel, showcasing the first look at Iman Vellani all suited up as the Marvel Cinematic Universe superhero while filming the Disney+ series in Atlanta, Georgia.

Iman Vellani seen on the set of Ms. Marvel suited up in Atlanta, 01-05-2021#Marvel #MsMarvel #DisneyPlus

Based on the photos, it's clear that the suit closely resembles the character's costume from the comic books.

Iman Vellani seen on the set of Ms. Marvel suited up in Atlanta, 01-05-2021#Marvel #MsMarvel #DisneyPlus

Although these photos are only being released now, they were taken during a night shoot in Atlanta in February 2021.

WandaVision and The Falcon and the Winter Soldier kicked things off for Phase 4 by showcasing comic-accurate costumes for Wanda Maximoff's Scarlet Witch and Sam Wilson's Captain America. Based on this reveal, it seems that the trend will continue in Iman Vellani's Ms. Marvel, and this should bode well for the MCU's next chapter.

Given that the costume reveals of Wanda and Sam in their respective shows happened in the final episodes, it's reasonable to assume that these photos were taken from a scene from the finale. While some would agree that this is a spoiler-heavy reveal, the positive reception from social media should be more than enough reason to drum up more hype for Ms. Marvel.

Kamala Khan is going to be part of the MCU's next generation of heroes alongside Hailee Steinfeld's Kate Bishop and Xochitl Gomez's America Chavez. It remains to be seen if the billion-dollar franchise is gearing towards introducing its own iteration of the Young Avengers, but it's clear that this is the narrative direction that they are going for.

Kamala's admiration for heroes combined with her sheer determination will prove to be valuable for a future Young Avengers project down the line. This is on top of the character's comic-accurate costume that has the potential to be a visual treat during action scenes.

Ms. Marvel will look to provide an in-depth look at Kamala's heroic journey, thus cementing her place as one of the bonafide heroes of the MCU once she shows up alongside Brie Larson's Carol Danvers and Teyonah Parris' Monica Rambeau in Captain Marvel 2.

Ms. Marvel is expected to be released on Disney+ in late 2021.