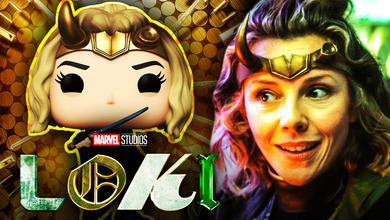 Marvel Studios is bringing yet another round of exciting new content thanks to the streaming run for Tom Hiddleston’s Loki on Disney+. This continued with Episode 3, entitled “Lamentis,” as the God of Mischief escaped the Time Variance Authority with a TemPad to a world unlike any the MCU has seen before.

Nearly the entire runtime featured Hiddleston alongside Sophia Di Martino’s newly introduced Variant, who calls herself Sylvie, as the two get to know each other on Lamentis 1.

Sylvie certainly made quite the impact on Loki in her first full appearance, showcasing a ruthless intent and teasing plenty of mystery in her backstory. While the episode featured mostly dialogue between herself and Loki, she brought one of the show’s biggest surprises yet when she revealed that every member of the TVA is some kind of Variant plucked from any number of timelines in the real world.

In celebration of Sylvie’s arrival, MCU fans now have a chance to purchase Sylvie-centric merchandise thanks to a fan-favorite in the collectible industry.

The non-Walmart exclusive figure is now available for pre-order here.

Both feature the new character in her MCU outfit complete with the horned headpiece, and one of them has her with glowing green eyes and a green dagger.

The non-Walmart exclusive figure is now available for pre-order here.

A FINE ADDITION TO MCU COLLECTIONS

Funko Pops! have become increasingly popular over the past few years, especially when they get to tie back to the ever-beloved Marvel Cinematic Universe. Both previous Phase 4 Disney+ shows in WandaVision and The Falcon and the Winter Soldier got their share of figurines during their release schedules, and it's only fitting that the MCU’s newest major player in Loki receives one as well.

Tom Hiddleston's solo series has already seen a duo of Pop! releases, which started off with a pair of entires for the God of Mischief and Owen Wilson's Mobius. The collectible mogul then upped their game with a figurine for the loveable-but-super-creepy Miss Minutes, even sizing her down for extra impact.

Both figures showcase Sylvie in what appears to be her natural fight-y state as she seeks revenge on the TVA for what they did to her, which will hopefully be revealed in the next three weeks. The costume looks impeccable on both figures all the way down to the horns, and the green particularly shines through in Sylvie's eyes and sword as well.

As more big reveals come in the second half of the season, Loki will surely have the opportunity to inspire more Pops! for fans across the globe. There is plenty of mischief left for the leading anti-heroes to incite as they travel through space and time, and there's no telling what kind of insanity will come with everything that's already been laid out.

The first three episodes of Loki are available to stream on Disney+.