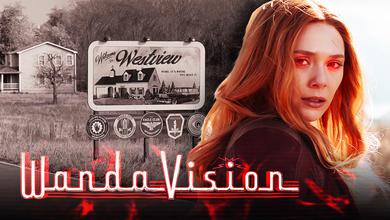 After a successful premiere with its first two episodes, WandaVision has set an exciting narrative that should tantalize fans over the coming months.

Marvel Studios took a big risk by positioning WandaVision as its headliner for Phase 4, particularly with its reliance on black-and-white sitcoms to inspire its first two chapters.

With television commercials and potential villains to look forward to, there is a lot in the pipeline for Marvel Studios' first television production.

New trailers and TV spots have continued to tease what's to come later on in the season. WandaVision's story featurette included a brand new scene with Monica Rambeau, seemingly inspecting the facade of Westview. Though the MCU is full of Easter eggs, another recent promo included a detail that Marvel Studios seemed to overlook.

A new TV spot for the Disney+ series has now debuted, displaying Wanda Maximoff in a more destructive setting...

A TV spot for WandaVision, shared by Twitter user @TristinCruz5, features a new scene from the Disney+ show.

At one point in the trailer, Wanda Maximoff can be seen in what appears to be her home, now destroyed and possibly overgrown with plantation and vines. Beyond the doors of her household, the Scarlet Witch can see another section of the house still bright, colorful, and in-tact.

The full teaser can be seen below:

So far, WandaVision's sitcom roots have forced the Maximoff household to appear pleasant and homely, matching the optimistic aspirations of the shows that it borrows from. This is a far cry from what fans have seen in the first two episodes, with their home now dilapidated and covered in flora.

There could be a number of reasons for the potential breakdown of Wanda and Vision's home. Though it is still murky, Wanda seems to be in control, or at least aware, of what is happening in Westview, trying to keep anything from interfering with her perfect life with her husband. The decay of her home could be reflective of her state of mind, unable to maintain the reality for much longer.

Alternatively, this could be the doing of another individual, such as a supervillain like Agatha Harkness or Mephisto. Both have been long rumored to be involved with the series, so they could be meddling with the Scarlet Witch's idealistic setting to thwart her attempts at leading a normal life. This is further supported by her outfit, which seems to be more general clothing rather than an era-specific costume. Wanda may have to accept what is happening around her, and can only address it as her true self.

Finally, this could be a further reflection of the more "cynical" sitcoms to come later on in the series. The Office and Modern Family are both being used as inspirations for future episodes, so this cynical attitude could be taken a step too far.