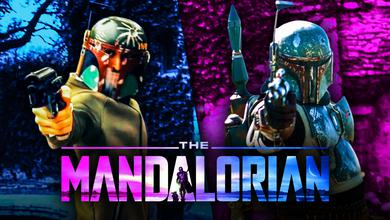 The Mandalorian Season 2 has been celebrated for crafting a fun and cohesive story while infusing each individual chapter with unique flair with its various directors.

Robert Rodriguez was one of the standouts from the past season, using his action expertise for Boba Fett's portrayal in "The Tragedy." Rodriguez clearly had a lot of fun making his episode, with the director recently sharing a glimpse of him playing his guitar on the set of The Mandalorian.

A special episode of Disney Gallery: The Mandalorian released on Christmas Day, which delved into the production of Season 2. The special demonstrated that Lucasfilm is still making the most of practical effects, utilizing a model ship for Moff Gideon's Light Cruiser. An Easter egg not even in the Star Wars films was highlighted, with a boom operator wearing bright pink shorts to pay tribute to the production of A New Hope.

"Making of Season 2" explored The Mandalorian's filmmakers once again, displaying a unique method used by Robert Rodriguez when conceptualizing his episode...

During the latest special of Disney Gallery: The Mandalorian, Robert Rodriguez talked about how he dressed his sons up in his Star Wars Halloween costumes in order to block out the various Boba Fett action sequences featured in "The Tragedy."

Having limited resources to get his point across, Rodriguez filmed makeshift scenes with his sons in their backyard to plan out the action beats:

"To illustrate what I was talking about, I took my Boba Fett and Stormtrooper Halloween costumes and put them on my sons and went into the backyard and filmed Boba's arrival."

Halloween costumes weren't the only oddity that Rodriguez made use of, with the director going out of his way to position action figures to "communicate what [he] was going for with a crew." Executive producers Jon Favreau and Dave Filoni were very impressed:

"Since I didn't have stuntmen at my disposal, I used my Star Wars action figures, cause a picture's worth a thousand words and helped me just communicate what I was going for with a crew. And when I first showed it to Jon [Favreau] and Dave Filoni, Dave said 'Wait a minute, were those just action figures I saw?' And I said, 'Well, yeah, I didn't have anything else on hand.' And he said, 'No, you don't understand. That makes it the coolest animatic ever.' And I just thought, 'These are my people!'"

While the team at Industrial Light & Magic are capable of producing film-level visual effects, Rodriguez was not afforded that luxury. Therefore, the director had to use the home-brew version of explosions for his planning:

It is often said that all a director needs is a camera and a subject, and Robert Rodriguez drives that point home with his intuitive planning. Rodriguez' ability to plan out scenes with the few resources that he had is somewhat inspiring, demonstrating to aspiring filmmakers that even the most prolific of directors aren't afraid go back to basics.

It is also interesting to see how Rodriguez' original vision translates to the final product, almost being identical in shot composition and blocking. This displays how in tune Rodriguez is with filmic language, being able to create effective shots without the need for fancy equipment or Volumes.

Rodriguez also demonstrates here that, like all of us, he is a massive Star Wars nerd. Many of the creatives working behind the scenes at Lucasfilm have a great love and respect for Star Wars. From Jon Favreau, to Dave Filoni, to Bryce Dallas Howard, to Rick Famuyiwa, to Robert Rodriguez, it is reassuring to know that the galaxy is in good hands.

"Chapter 14 - The Tragedy," as well as all the other episodes of The Mandalorian, are streaming now on Disney+.