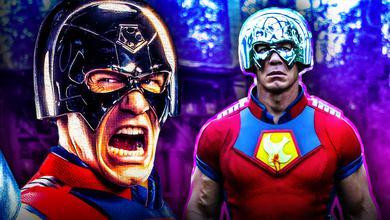 The DC Extended Universe is looking forward to some exciting new projects on the big screen over the next couple of years, starting with James Gunn's The Suicide Squad this August. This film will also kick off the franchise's new run of projects in the streaming world as John Cena takes his character from this movie into 2022's Peacemaker on HBO Max.

Cena's star power as a wrestler has built steadily over the last decade into his first comic book movie appearance, setting the stage for a thrilling prequel series centered around the peace-loving anti-hero.

Surrounded by an all-star cast of characters like Robert Patrick and Cena's co-star from The Suicide Squad Jennifer Holland, there's no telling what kind of mayhem Cena will get to bring to the streaming realm.

While filming is still going strong on this solo series, James Gunn recently gave fans a status update for some of the show's stars.

A PARTIAL WRAP ON PEACEMAKER

He praised the "three beautiful weirdos" for adding "so much to our show," commenting on how "the next two weeks won't be as fun without them." This indicates that Peacemaker may only have two weeks left of shooting as well.

Last night we wrapped Annie Chang, Lochlyn Munro, Christopher Heyerdahl on Peacemaker Season One - three beautiful weirdos who add so much to our show - & the tears flowed. The next two weeks won’t be as fun without them! Love you guys!"

NEARING THE END OF PRODUCTION?

All three actors Gunn mentioned have reportedly recurring roles in the Peacemaker series, which means it's unclear how much screen time or how many episodes each of them will be included in. With the show not set to debut on HBO Max for at least another six months, there is likely still plenty of work for the core actors like Cena to finish before going into post-production.

Gunn did mention that the following "two weeks" wouldn't be "as much fun" without this trio of stars, potentially signaling that this is how much longer the show has to shoot. With no specific release date set for Peacemaker, this could be the case, but it will certainly be something to pay attention to heading into July.

With The Suicide Squad now just over a month from premiering in theaters and on HBO Max, the potential is increasing that Warner Bros. and HBO Max will begin to promote Peacemaker more heavily alongside this release. Whether that turns out to be true, this show will have plenty of hype as it kicks off the DCEU's venture into episodic storytelling.

Peacemaker is set to arrive on HBO Max sometime in January 2022.