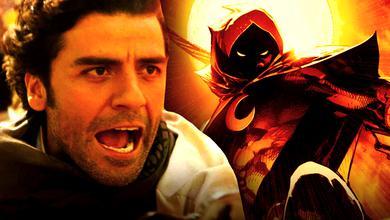 Marvel Studios is in the midst of a flying start to 2021. The studio kicked off Phase 4 of the MCU with WandaVision and will follow it up with the upcoming premiere of The Falcon and the Winter Solider. As the team behind the Marvel Cinematic Universe prepares for eight more releases through 2021, there's a whopping dozen new entries coming to the franchise in 2022, half in theaters and half on Disney+.

Included in the 2022 release slate is the Disney+ series Moon Knight, which is all but confirmed to star Oscar Isaac in the leading role of Marc Spector. Not only will Spector help the franchise take a further dive into the supernatural, but will become the first leading character in the MCU for whom the Jewish religion is an important part of his background.

In that light, a new casting call confirms that Marvel will take this aspect of his life directly from the comics.

POC Culture is reporting on a casting call from Marvel Studios for two Latinx/Jewish roles in their 40s-50s.

The first role is for "Eddie Silver," described as a protective father with a dark side who is concerned about his son's well-being. The second is for "Willow Silver," who is described as "a fiercely loving mother who is broken by grief."

While there is no specific project listed, it's a near certainty that these roles will be for Marc Spector's parents in the Oscar Isaac-led Moon Knight series on Disney+

HOW BIG WILL THESE PARTS BE?

It seems almost certain that Marvel Studios is looking to cast Marc Spector's parents thanks to clear signs in both of the descriptions.

Spector is well known in the comics as having Dissociative Identity Disorder, with one of his identities being that of his super alter-ego Moon Knight. This condition is a major concern for his father through much of Marc's youth.

Some of these comic runs showed Marc in different psychiatric hospitals to deal with his DID, with Marc feeling somewhat ashamed at times thinking his father was embarrassed by him. Marc's condition is even potentially caused by the fact that his father (a rabbi) was revealed to be a serial killer, and while Disney may not take this route directly, it could be teased by the mention of the character's "dark side."

The Willow role could very well be for Marc's mother, especially considering that the grief mentioned in the call would be due to either Marc or his father's conditions.

As for how expansive their role will be in Moon Knight, it mostly depends on how much time is spent looking at Marc Spector's childhood. With the series largely focusing on the adult version played by Oscar Isaac, it will be interesting to find out just how much time the series spends with Mr. and Mrs. Spector.

Moon Knight will shoot later this year before releasing in 2022.