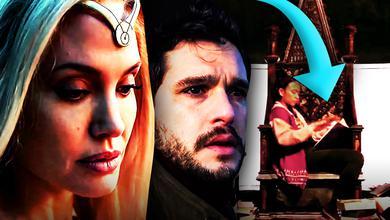 Marvel Studios is using Phase 4 to usher in a new era in the Marvel Cinematic Universe.

After multiple promotional leaks, teaser footage within sizzle reels, and some exciting interviews with the cast, fans finally have a full trailer look at Eternals

Academy Award Winner Chloe Zhao is set to lead this gang of space-god-like protectors in what looks like the most visually unique MCU project to date.

And while this 2-minute look at Eternals gives audiences the best look yet at the star-studded roster, there is still plenty of mystery surrounding this film.

That being said, here is a look at everything learned in the official teaser trailer for Eternals.

THE ETERNALS HAVE ARRIVED

The trailer opens with an ominous and powerful arrival of a grand and majestic spaceship, as the Eternals touch the ground on Earth for seemingly the first time.

A group of very primitive human beings is shown in shock of their arrival, which leads to the assumption that this is one of if not the earliest stages of the human race.

Right away audiences can see that this movie is shot like no other Marvel movie before it. This feels much more like an epic series with breathtaking set pieces, awe-inspiring shots, sporting a much more dramatic tone.

As the Eternals prepare to step down on Earth, fans are treated to a first real look at Brian Tyree-Henry's Phastos.

Phastos is shown very briefly outside team shots. The engineer's ability to build is showcased early on, but that is it as far as his Eternal form.

This is also a good look at the visualization of the Eternals' powers. The golden, abstract, almost decorative energy that brings Phastos' creations to life can be seen in different variants across the entire team and their unique power sets.

In one of the first power reveals in the trailer Gemma Chan's Sersi uses her Eternal powers to bring water to this village of humans.

This leads to what seems to be flourishing crops and water resources this group had not seen before.

This is a simple example of how and why the Eternals were revered as gods and saviors to the elders of man.

After seeing her in an equestrian outfit in the MCU Phase 4 sizzle reel, Salma Hayek's Ajak gives audiences a brief explanation as to what this group of "gods" has been up to since their arrival.

The spiritual leader of the Eternals explains that she and her team "have watched, and guided, and helped them progressed, and seen [the human race] accomplish wonders." The deity-like beings seem to have given them the tools, knowledge, and belief to lay the seeds of what is now known as society.

Ajak goes on to reveal that after the initial kickstart of humanity, the Eternals have never interfered. Meaning that once this team of gods made their impression on man, they sat back and watched their experiment play out.

This leads to the question of just how many major events in history and MCU lore will be shown in this film through time. Fans are led to believe that Eternals offers a different perspective on the key moments of life throughout history.

And if the Eternals have seen multiple alien attacks, an android advocate for forceful evolution, and the vanishing of half of all life in the universe unfold... why are they stepping in now?

ANGELINA JOLIE SQUARES OFF AGAINST A FAMILIAR SHIELD

Angelina Jolie has been the star of the action seen from the under three minutes of footage released thus far.

The warrior goddess Thena is capable of using her Eternals magic to conjure any handheld weapon with finesse and mastery.

It could be a coincidence, but the shields being held by these soldiers have a familiar star across the middle.

There is no telling when these scenes take place, but it is hard to imagine these ancient soldiers weren't inspired by the star-spangled man with a plan.

LAUREN RIDLOFF SHOWS OFF HER SKILLS AS MAKKARI

Lauren Ridloff's Makkari is on full display as the MCU's newest speedster.

Not only is she seemingly reading every book ever written at the speed of light, but she is also seen zooming across the screen in multiple shots.

An advantage Makkari has by being deaf is that she is invulnerable to the effects of the sonic boom left when she takes off at full force.

In the early stages of this trailer, they show what could be the city of Babylon.

This is a holistic city that has been the site of Eternals battles and sanctuary in the past.

Another look at Marvel tying in their heroes with ancient human mythology. Like Thor, most of the Eternals and the locations they reign are meant to be the inspiration for the legends of old.

SERSI THROUGH THE YEARS

It seems apparent that this movie will take audiences on a journey across the history of the MCU through the eyes of the Eternals.

But a very eerie scene depicts the star of the show Gemma Chan as Sersi being shown this time jump in real-time.

Her clothes do not change as the environment, and surely the calendars change around her. This could be a look at the process in which these Eternals are "awoken" from their cover story lives as humans.

Perhaps the more interesting frame is an embrace with Hayek's Ajak and Tyree-Henry's Phastos as he is overcome with emotion. This could be the first look at the transition these Eternals have to go through which is sure to be an overwhelming experience.

In Ajak's epic exploration monologue, she leaves fans with one final line: "We have never interfered... until now."

As this is being said a mischievous look from Barry Keoghan's Druig flashes across the screen. Druig is known for not being on board with the Eternals' involvement with the lives of man.

Druig's Eternal power is a sinister one, as he is capable of controlling the minds of humans. Possibly explaining the hostile nature of the group of humans surrounding the Eternals in this set piece.

There are many shots of Druig alongside the rest of the team in scenes shown from the earlier time periods. The aforementioned "suspect shot" is shown in a place where modern clothing and aesthetic have been heavily featured.

Blink and you will miss it, but there is the first live-action look at the ying to our heroes' yang.

The Deviants, like the Eternals, are sent by the Celestials as a test on the negative sides of man. This quick shot resembles one of the leaders of the group, Kro.

This shot offers a brief look at Kumail Nanjiani's Kingo squaring off against the monstrous foe.

The Deviants are set to play the muscling antagonist for the Eternals. With ties to the Deviants himself, there have been many rumors of a return of the Mad Titan and half Deviant, Thanos.

SERSI AND IKARIS LEADING THE WAY

While this trailer leaves much to be desired from a cast-chemistry standpoint, it does sport a heavy-handed look at the main romance of the film.

Chan's Sersi and Richard Madden's Ikaris are featured throughout the entire teaser, giving a great deal of intrigue to their love story.

Sersi is known for her affection toward humans as Ikaris, the tactical leader of the squad, is known for his unrelenting drive of keeping his family safe.

Whether Sersi's compassion for the people of Earth gets in the way of their love is uncertain. But shots of the couple seemingly falling in love throughout time implies that these two are destined to be together.

These shots also draw arguably the most important question this film has yet to answer. It is known that something forces The Eternals to get in the fight, but how are these Eternals "awoken" to their past while they live their normal human lives?

SPRITE AND THE ETERNALS PARTY IN THE AIR

While drinking and partyin on a private jet is nothing new in the MCU (literally being around since day one), seeing it in this trailer gave a rare modern shot for the history-spanning epic.

Sprite is seen doing some form of karaoke in a private jet, with a passed-out Gilgamesh in the background, played by Don Lee.

The "K" monogram on the door suggests that this plane belongs to the Bollywood star by day, Eternal swordsman by night, Kingo.

YOU KNOW NOTHING DANE WHITMAN

Finally, the King Of The North makes his MCU trailer debut. Kit Harington is set to play Dane Whitman (aka Black Knight) in Eternals.

Whitman's role in this story is wildly unknown.

But fans rejoice to see a CLASSIC look of worry on Kit Harington's face as something approaches a modern-day cast of Eternals.

He is shown in a frame with Chan's Sersi. Surely not a coincidence as there is a rumored love triangle between Sersi and the two former Stark brothers, Whitman and Ikaris.

In what is now a staple of Marvel Studios promotion, following the title card is the biggest scene of dialogue shown from this project. And it was a shell shock moment for anyone trying to piece this thing together.

We see a few members of the Eternals team gathering for a meal as Sprite (played by Lia McHugh) asks, "With Iron Man and Captain Rogers gone, who will lead The Avengers."

There is a ton to unpack here and Ikaris offering up his leadership skills is the least of them.

This sets in stone that at least some portion of this movie will take place after the events of Avengers: Endgame.

It also confirms that the Eternals have a deep-rooted knowledge of not only who the Avengers are, but that there have been some big changes as of late.

This teaser trailer, more than anything, shows audiences that this movie will look and feel different from any Marvel movie that has come before. The plot, story, and character dynamics are still some of the biggest mysteries in the MCU. But this is a prime example of the benefits of being the greatest cinematic franchise in history.

Being able to take risks like this with unknown characters, innovative artists and bold stories is what led to projects like Guardians of the Galaxy, Thor: Ragnorak, and WandaVision.

Chloe Zhao is bringing her golden statues to the table for the dramatic take on that concept. Needless to say... interests have been peaked.

For a more detailed breakdown of this teaser trailer and the Eternals roster, please make sure to subscribe to The Direct Podcast. the podcast will be diving into this movie in a big way on May 30th.