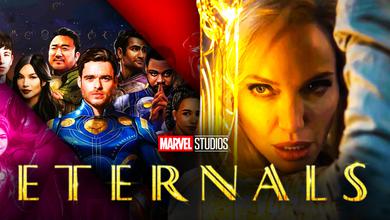 Marvel Studios' Phase 4 films are returning to theaters in just under two months, even though three of them finished filming some time ago. One of those is Marvel's Eternals, which is building considerable hype as potentially the MCU's next major award-winning adventure.

In terms of first movies within the franchise, Eternals showcases one of the most impressive core casts when looking at both quantity and quality. With a team boasting nearly a dozen of Hollywood's biggest names like Angelina Jolie and Richard Madden, the MCU's third movie of 2021 has no shortage of star power bringing Marvel's team of immortal beings to life.

Image leaks have teased the team's top-notch costuming for the last few months, hinting at colorful recreations of the group's look from the comics. A new look at these outfits recently put the entire team into one shot together.

A 2022 calendar promoting Marvel Studios' Eternals has been revealed via @Eternalsupdate on Twitter, showing off the team in costume. From left to right, the image features Druig, Sersi, Phastos, Makkari, Ikaris, Gilgamesh, Thena, Ajak, Kingo, and Sprite.

The front page of the calendar features the entire team suited up, although the image notably omits Angelina Jolie's Thena from the group.

Each member of the team other than Angelina Jolie's Thena is included for one of the calendar's months. The other three images feature different members of the Celestials, who will play a key role in the film.

The calendar includes a poster featuring the ten primary team members, including Jolie's Thena, standing together with their full costumes on display in the sun.

THE MCU'S NEXT TEAM OF HEROES

Even for all the action and drama that each top-notch actor will bring on an individual level, the big attention-grabber for Eternals is the team dynamic that's sure to be a big part of the plot. Considering these are beings that have lived for thousands of years through hundreds of major world events, their camaraderie should be second to none upon their arrival.

As for the picture, all ten leading heroes look ready for whatever they have to face in their solo movie, even for this being simply a promotional image. The sunlight and mist in the background adds an interesting visual image as the team poses together, continuing the sense of mystery that surrounds the November release.

As mentioned before, the fact that Angelina Jolie is missing from the first two images is certainly notable even if it turns out to be nothing in the final movie.

While Gemma Chan may be regarded as the film's lead, and even with how popular Richard Madden is, Jolie is arguably the biggest Hollywood star in this cast. Her absence from the cover page and the individual months will raise some eyebrows as Marvel continues its promotional tour.

Earlier this month, the first few seconds of footage from Eternals gave just the slightest hint of what fans can expect to see from the team. New superpowers and fighting skills will be showcased against a background of stunning real-life locations, setting the stage for one of the MCU's potentially iconic films.