Loki Director Addresses Whether Sylvie Is an Enchantress-Lady Loki Hybrid 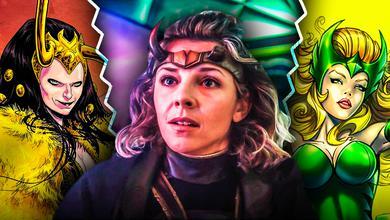 Marvel Studios' Loki has proven to be yet another successful project for the MCU on Disney+ with Tom Hiddleston continuing the God of Mischief's story in grand fashion. With three episodes having premiered on Disney+ and three yet to arrive, fans are fully invested in the long-time anti-hero as he works his way through this space-and-time-traveling madness.

Episode 3 brought the new character, Sylvie, fully into the fray after she was first teased at the end of the previous entry, giving Loki quite the interesting road-trip partner as he plans his next moves with the TVA. Already having received her own Funko Pop!, the mysterious Variant still has a great deal of backstory left to explore, especially while she and Loki are currently stuck in 2077 on Lamentis-1.

This is something the show's director recently teased, particularly in terms of which Marvel character she truly is.

Loki director Kate Herron spoke to Entertainment Tonight about Sophia Di Martino's Sylvie and where she's headed over the course of the show.

When asked if the Variant was something of a hybrid of Lady Loki and Enchantress, Herron only teased that "there's more to be delved into" and that she's "unique" and "different to the comics." Commenting on how her adjusted blonde hair color "played in that sense" of giving her character depth, she hinted at much "deeper" things to come:

Herron did confirm that part of who Sylvie is "is a female Loki" since the TVA confirmed that "it's a Loki they're tracking" in the first two episodes. However, real answers are coming toward who Sylvie really is, including where she came from and why "[she doesn't] like being called Loki:"

"The main thing I would say is: Lady Loki in the comics is a very different character to our character, obviously. I love that character and I think she's got a very different journey. But our Sylvie is a female Loki, in that sense -- because in episode 1 and 2, they know it's a Loki they're tracking -- but I think that's part of the discussion. It's almost like Loki -- as in Tom Loki -- he's like, "Wait, how much of my life have you got? Who are you?" And I think that's the real question is, who is she? So, we will discuss that as the show goes on. Why does she not like being called Loki? What's her past? Where did she come from?"

WHO IS LOKI DEALING WITH?

After months of assumptions that Sophia Di Martino was definitively playing Lady Loki, Sylvie seemed to come off as kind of a mix of multiple Marvel Comics characters. Fans theorized that she may be a combination of Lady Loki and Marvel's Enchantress, specifically after she mentions "enchanting" people multiple times to get inside their heads.

This became even more ambiguous during Loki and Sylvie's scene in the train cab when they tried to see how much of their lives were identical to each other's. While there were some similarities, such as both of them being adopted, there is still plenty of mystery surrounding Sylvie's true identity and whether she's really a Variant of the God of Mischief.

With three episodes remaining and the two reluctant partners now stranded on Lamentis-1, there should be plenty of opportunities for more about Sylvie to reveal itself over the next three weeks. No matter what those details turn out to be, she will be someone to whom fans pay close attention as her true intentions come to light.

The first three episodes of Loki are available to stream on Disney+.