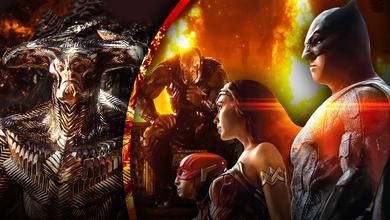 Zack Snyder's Justice League is finally set to drop on March 18 on HBO Max, with details of the international release plans having been revealed this week.

Snyder's cut of the film is set to make major changes from Whedon's original cut of the film with many elements being included to set up a future that is unlikely to ever become a reality.

Some of the biggest changes made to the film come in its villains, including a major redesign for Steppenwolf, the addition of DC's big-bad Darkseid, as well as minor appearances from other DCEU villains including Joker, Deathstroke, and Lex Luthor.

Now, a new look has emerged at some of these villains...

NEW LOOK AT THE VILLAINS OF ZACK SNYDER'S JUSTICE LEAGUE

With under one week to go until the release of Zack Snyder's Justice League, HBO Max released two new stills from the film showing off its main villains — Steppenwolf and Darkseid.

The new look at Steppenwolf shows off the best look yet at Snyder's redesign from the original 2017 film, which was heavily criticized for being a bit bland.

A major addition to Snyder's cut of Justice League is DC's biggest villain Darkseid, who was included to set up future installments. The new still shows the Lord of Apokolips calmly sitting in a burning building. It remains unclear the size of his role in the film.

THE VILLAINS OF APOKOLIPS

Clearly, the designs of Apokolips' two villains are incredibly well done. Steppenwolf has seen huge upgrades to the level of details in his plated armor that ought to make him a bigger and more intimidating threat as the main villain of Justice League.

It's hard to tell exactly how much Darkseid will appear in the upcoming film. The villain was totally absent for Whedon's original cut, so it's unsure how involved he will be in the story and how much he's just there to set up future sequels that will never be.