Doctor Strange in the Multiverse of Madness: Chiwetel Ejiofor Confirms His Return 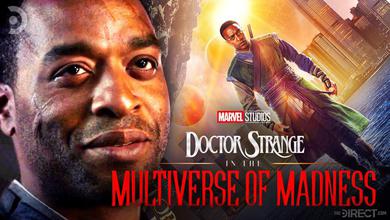 One of the most highly anticipated movies in all of Phase 4 of the Marvel Cinematic Universe is shaping up to be Doctor Strange in the Multiverse of Madness. After the original Doctor Strange in 2016 earned rave reviews and nearly $678 million in global box office revenue, the next solo adventure for the Sorcerer Supreme is set to be one of the craziest and most jam-packed films in the MCU's history.

Fans are already cheering over the hire of Sam Raimi as the film's director, making a triumphant return to superhero movies after the 2000's Spider-Man trilogy and set to bring the horror and madness required for this new brand of MCU film. The only confirmed cast members are Benedict Cumberbatch making his fourth appearance as Stephen Strange as he teams up with and his new partner Elizabeth Olsen in likely her most featured MCU film role as Wanda Maximoff/Scarlet Witch. A new interview has also revealed one more actor set to make his return to the franchise, even though his return has been expected.

In a recent interview with Comicbook.com, Baron Mordo actor Chiwitel Ejiofor all but confirmed that he will reprise the role in 2022's Doctor Strange in the Multiverse of Madness. Ejiofor gave this quote when discussing his excitement to work with the sequel's director Sam Raimi:

He's coming on. I'm very, very excited about that. Obviously, we've been sort of interrupted as the whole world has been in the pandemic but hopefully we are back on track with that and continuing quite soon, so I'm very excited about it.

He also gave this tease when asked about where exactly Mordo was during Avengers: Endgame's final battle:

All will be revealed.

Even though there was nothing pointing to the contrary, this appears to be the first confirmation that Baron Karl Mordo will return during the course of Doctor Strange in the Multiverse of Madness. After leaving Doctor Strange and Wong in the aftermath of the battle with Kaecillius and Dormammu, Mordo was last seen using his powers to steal the magic out of Benjamin Bratt's Jonathan Pangborn while explaining that the world simply had "too many sorcerers."

It's clear that Mordo has been lurking in the shadows of the MCU since 2016, but it will be exciting to find out exactly what he has been doing since then, along with what kind of mystical havoc he has been causing. There are still no confirmations as to who the big villain of the upcoming movie will be, but Mordo will undoubtedly be a major obstacle for Strange and Wanda to overcome as they make their way through the Multiverse.

As Ejiofor prepares himself for the beginning of production, he also seems to be highly anticipating the opportunity to work with director Sam Raimi. With his history in both comic book movies and the horror genre, along with a self-professed love for the legend of Doctor Strange, the mystical sequel should be in fantastic hands as more of the cast and production start coming together.

Doctor Strange in the Multiverse of Madness has had its production start date delayed indefinitely due to the Coronavirus pandemic, and its release date has been pushed to March 25, 2022.