On September 18, 2018, Variety reported that Marvel Studios was developing a limited exclusive Disney+ series centered on the MCU's Wanda Maximoff. Marvel Studios president Kevin Feige was set to serve as one of the series' executive producers. The Hollywood Reporter later reported that Black Widow writer Jac Schaeffer would serve as the series' showrunner, as well as an executive producer and the writer of the show's pilot episode. 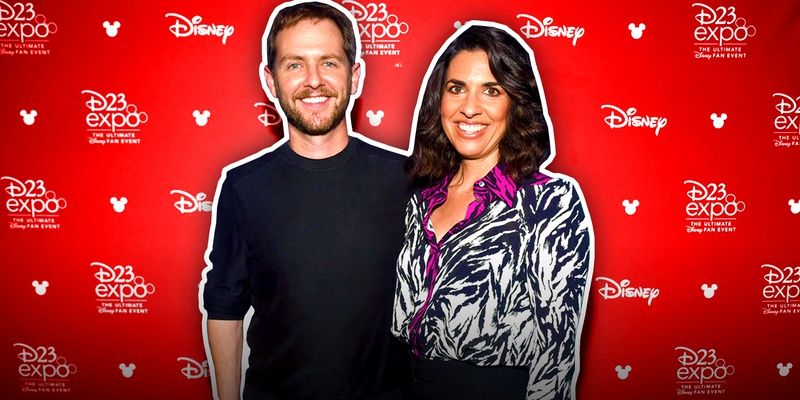 Feige also announced at D23 Expo 2019 that the series would consist of six one-hour episodes, directed by It's Always Sunny in Philadelphia director Matt Shakman. Charles Murphy of Murphy's Multiverse later reported that WandaVision would begin production in Atlanta on November 4, 2019. It was also announced that Ant-Man composer Christophe Beck was set to compose the score for the series.

On March 1 of this year, WandaVision crew member Taylor Grabowsky revealed that the series had wrapped principal photography. Former Disney CEO Bob Iger originally announced that the series was scheduled to debut on Disney+ in December of 2020. When Disney CEO Bob Chapek was asked in May 2020 if the series will still release on Disney+ this year due to any coronavirus-caused delays, Chapek offered no comment on the matter.

Actress Elizabeth Olsen and actor Paul Bettany are confirmed to be reprising their respective roles as Wanda Maximoff and \Vision in the series. During SDCC 2019, Marvel Studios president Kevin Feige revealed that actress Teyonah Parris had been cast as the adult version of Captain Marvel's Monica Rambeau in WandaVision. 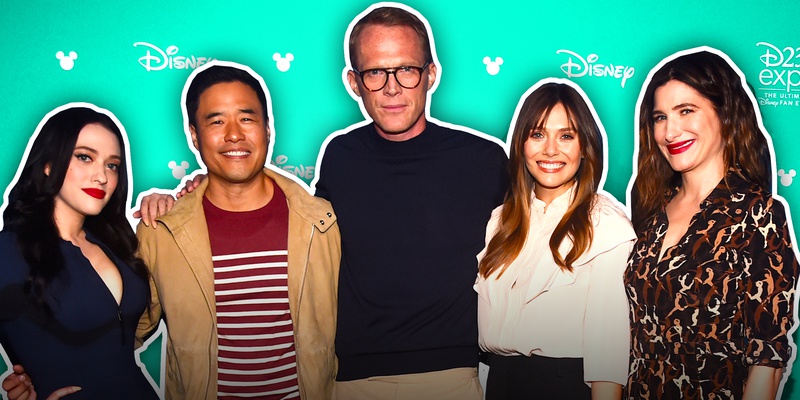 Kevin Feige also announced at D23 Expo 2019 that Thor actress Kat Dennings and Ant-Man and The Wasp actor Randall Park would be reprising their respective roles as Darcy Lewis, and Jimmy Woo in WandaVision. MCU newcomer actress Kathryn Hahn has also been cast as a character that Feige described as a "nosy neighbor" in the series.

WandaVision is "kind of [Kevin] Feige's creation," and "it's an idea that he conceived," said actress Elizabeth Olsen. Actor Paul Bettany has stated that he and Olsen couldn't "have ever been more surprised" when Feige pitched the "idea for a sort of six-hour movie." Feige has stated that WandaVision will be "unlike anything this genre has done before."

Actress Elizabeth Olsen has said that WandaVision will be "a really clever story" and that she is excited about being able to "play around as actors" with "a totally different genre." Actor Paul Bettany has said that he's been "genuinely, like, blown away, as the scripts come in, they're just, the work is so extraordinary." Bettany has even gone as far as to describe the series as "f***ing bonkers!" and stated that "it's definitely the oddest" Marvel Studios project to date, "it’s so out there and nuts, the choices that they are making."

Marvel Studios president Kevin Feige was partially influenced by author Tom King's Vision series, "there were some beautiful covers for that, with [Vision] in the suburbs which [provided] a lot of inspiration." Feige has teased that while the show may see an appearance from Tom King's Sparky the Dog, "[WandaVision] is only just inspired by that series" and that Marvel Studios will be going in "a different direction" to the comics.

Olsen has teased that WandaVision will be “a mash-up between American sitcoms throughout the decades and [Marvel Studios films].” Bettany has said that the series will start "so avant-garde, and weird, and messed up," and then transitions "into an epic Marvel movie that [fans have] grown to know and love" over the years.

WandaVision director Matt Shakman has echoed Olsen and Bettany's statements, "there's definitely a mix of sitcom and big Marvel action." Shakman has also teased that fans "will see Wanda and Vision be funny," while Kevin Feige has teased that the series will also be "somewhat scary" and "have repercussions" for the future of Phase 4 of the MCU.

During the Disney+ documentary, Marvel Studios: Expanding the Universe, WandaVision supervising producer Mary Livanos teased that "so much of the fun in watching the show for fans will be the unexpected discovery of where and when in the MCU this series takes place, and how it all fits into that larger picture." 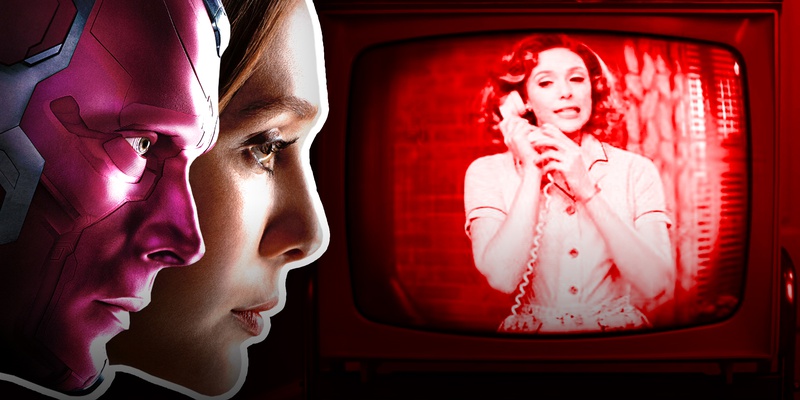 WandaVision showrunner Jac Schaeffer has teased that Marvel Studios has been working to make mysteries like Vision's status in the MCU "exciting and intriguing and head-turning at every moment." Bettany has also said that "there is an answer to that question," and Olsen has teased that it is something that fans will "learn when you watch our show."

Kevin Feige has teased that WandaVision allows Marvel Studios "to tell more of [Wanda and Vision's] story" and showcase "more of what Wanda can do, and more of what makes Vision [the] Vision." Feige is particularly excited about finally being able to introduce Wanda Maximoff as the Scarlet Witch, teasing that the series will "absolutely make a big deal" of the Scarlet Witch mantle, and further explore "what does that mean?" in the MCU.

At D23 Expo 2019, WandaVision concept art created by Marvel Studios' Director of Visual Development Andy Park was officially unveiled. The artwork featured Wanda and Vision dressed in 1950's clothes, sitting opposite a glowing red television, as shadows of their true selves loomed over the walls behind them.

Set photos from Atlanta have also confirmed that S.W.O.R.D. (Sentient World Observation and Response Department) will be featured in WandaVision. Additional photos taken from the Atlanta set of the series revealed a S.W.O.R.D. base with vehicles, as well as the first look at actor Randall Park as Jimmy Woo, and the confirmation that actress Teyonah Parris' take on Monica Rambeau will be an Agent of S.W.O.R.D. in the series.

Last October, a WandaVision casting call revealed that Marvel Studios was looking for baby boys and girls to feature in the series, potentially as Wanda and Vision's children. In the 2020 Superbowl "Big Game" spot, Wanda could be seen with Vision in an 80's inspired scene, as they stood by two cribs, which popped out two pacifiers, suggesting that Wiccan and Speed - who are the children of Wanda and Vision in the comics - may make an appearance in the series.

In addition to this, the spot also featured a 1960's inspired scene, where Wanda was welcomed home by Vision. Wanda could also be spotted wearing a 1950's wedding dress, as well as a colorful 70s outfit, and even a 90s inspired take on the classic Scarlet Witch costume from the comics. She could also be seen wearing modern clothes, with a devastated look on her face.

Marvel Studios president Kevin Feige has also revealed that the events which occur in WandaVision will tie directly into Doctor Strange in the Multiverse of Madness, leading to actress Elizabeth Olsen's confirmed appearance as the Scarlet Witch in that film.

According to a report from Murphy's Multiverse, Wanda's reality-altering powers may make their MCU debut in this series. Charles Murphy of Murphy's Multiverse has also reported that segments of WandaVision will be filmed in front of a live studio audience. Murphy has also said that Nightmare has been cast and will be the series' main antagonist.

Charles Murphy has also reported that Marvel Studios has plans for actor Benedict Cumberbatch to reprise his role as Doctor Strange in WandaVision. Most recently, Murphy's Multiverse has said that WandaVision has finished filming and that work on the VFX work has been completed, as the series is apparently now in the editing stage of post-production. 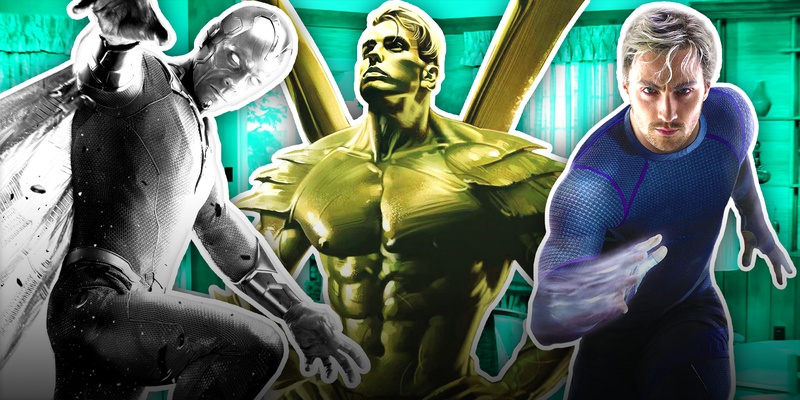 Jeremy Conrad of MCU Cosmic claims that he had learned that Vision's white appearance from West Coast Avengers Vol. 2, #45 may make it's MCU debut in some shape or form in WandaVision. Conrad has also reported that Marvel Studios had apparently cast eight-year-old twin boys. The children will apparently grow up rapidly in the series, beginning as infants in a 50s inspired episode, then appear as children in a show modeled after the late 70s / early 80s, and eventually become teenagers in an episode inspired by modern comedies.

In a now-deleted WandaVision audition tape, a young actor could be seen acting out a scene, where he refers to his uncle, seemingly hinting at Quicksilver's return to the MCU in this series. The Iluminerdi has also reported that Marvel Studios was apparently in the process of casting an actor to portray the LGBTQ character Hulkling, Wiccan's love-interest from the comics.

Most recently, Charles Murphy of Murphy's Multiverse reported that X-Men: Days of Future Past actor Evan Peters had signed on for a "key role" in WandaVision. Murphy claimed that Peters "landed the role late last year" and "filmed his scenes shortly after."