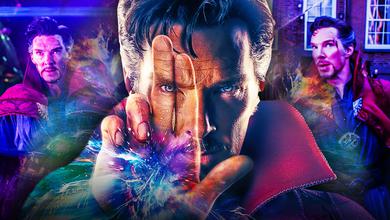 The MCU is set to return to the expansive world of magic with Doctor Strange in the Multiverse of Madness after kicking off Phase 4 with WandaVision on Disney+. The Sorcerer Supreme may have been kept on the sidelines during Wanda Maximoff's solo Disney+ story, but Benedict Cumberbatch's hero is ready to make an impactful comeback in his first appearance since 2019's Avengers: Endgame.

Doctor Strange is widely regarded as one of the most powerful heroes in the MCU even after only one solo movie, largely due to his intelligence and confidence as an up-and-coming Master of the Mystic Arts. He's proven in his three films to date that he's more than capable of handling himself in a fight, whether using his magic or if he's in a physical confrontation.

Evidently, that's part of what makes him such a fun hero to develop for those working on his next MCU outing.

Doctor Strange in the Multiverse of Madness co-writer Michael Waldron spoke with Vanity Fair about how he enjoys writing for Benedict Cumberbatch's lead hero.

Waldron described Strange as "Indiana Jones in a cloak," particularly with being "a hero who can take a punch." The writer alsoi spoke about how much the Sorcerer Supreme was "really getting beat up" in his first movie while also being "very capable and everything."

He then went on about director Sam Raimi's influence on the film, which he called "incredibly visually thrilling." According to him, the sequel is going to be something "unlike anything you've seen in the MCU before:"

“He's Indiana Jones in a cloak to me. He's a hero who can take a punch. That's what made those Harrison Ford heroes so great. Those guys get their asses kicked. Look at Stephen Strange in the first movie. He's really getting beat up but he's very capable and everything. I can tell you that it's a ride...very Sam Raimi. The film is incredibly visually thrilling. John Mathieson our DP, who shot Gladiator and Logan — I think the look of it is going to be unlike anything you've seen in the MCU before.”

Ant-Man and the Wasp: Quantumania writer Jeff Loveness, a close friend of Waldron's, spoke of Waldron wanting to "write a really great Indiana Jones-esque blockbuster" that turned out to be "kind of a throwback."

Loveness also commented on how Waldron "really got to the heart of the character," specifically the doctor's arrogance, in developing the story:

“He just wanted to write a really great Indiana Jones-esque blockbuster. He nailed it. It’s a kind of a throwback. His wife is a [physician’s assistant]. He really got to the heart of the character, how doctors do have to be cocky. He got the Hawkeye Pierce energy of Strange.”

The MCU is well-known to have some of the best action movies in the business, even though they primarily come in the form of superhero epics. That being said, Waldron's quotes seem to mean Marvel Studios has something of a classic action flick coming in possibly its craziest property of Phase 4.

It's exciting to know that even while Doctor Strange's skills as a sorcerer will rise to new levels, he will still be put in situations to lay a smackdown on undisclosed villains and minions in front of him. The hero took more than his fair share of punches, kicks, and hits in 2016's Doctor Strange, and that was only at the start of the journey of Benedict Cumberbatch's superhero.

Elizabeth Olsen's Wanda Maximoff will certainly help with providing some of her own intense magic, and it will be exciting to find out exactly what the duo will have to deal with in the multiversal adventure. The rumor is that they will be using their strength against a giant green octopus in Shuma Gorath as the main villain, which will make for insane action sequences in itself besides the introductory battles.

As for Waldron and Loveness speaking about specific movies like Indiana Jones, this certainly sets a high bar for Marvel Studios in the action department. Thankfully, this is a bar with which Marvel Studios is quite familiar thanks to 23 blockbuster movies and two Disney+ shows filled with all types of action sequences over the years.

Doctor Strange in the Multiverse of Madness will release in theaters on March 25, 2022.