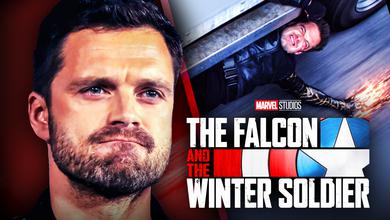 Marvel Studios' top stars are known for putting in their best efforts year after year to bring the highest quality possible to the MCU's continuing release schedule. This includes performing as many of their own action stunts as possible, putting them in the spotlight for much more than just bringing their roles to life emotionally.

MCU fans just got more than their fair share of fighting and action sequences in The Falcon and the Winter Soldier, which finished its run on Disney+ last month with Anthony Mackie and Sebastian Stan leading the way. Both stars saw their fair share of stuntwork in the air and on the ground, some of it even making for entertaining moments that didn't make it to the final cut.

Even more impressive is some of the pain that stars like this endure to get these scenes films, like some of the material Stan recently spoke about.

The Falcon and the Winter Soldier star Sebastian Stan appeared on the Just for Variety podcast and discussed a couple of frustrating injuries he dealt with during shooting for the Disney+ show.

Evidently, Stan twisted his ankle badly "at the very beginning of the shoot" while he and the team were shooting on Sam Wilson's boat for Episode 5:

"On the first day, we shot episode 5 at the very beginning of the shoot, and that’s the boat, when I go and help him on the boat. And Day 1, the first day on set, I’m jumping off this dock onto the boat to help him, and I just landed and twisted my ankle so badly that I thought it was broken, I actually couldn’t walk on it. So that was Day 1, that took about a week and a half to two weeks of sort of masking this limp that I had on the ankle. That was the beginning of the show."

Then, during the holidays, Stan "ended up breaking [his] toe" and had to deal with it while filming the Madripoor sequence from Episode 3. Talking about how he was "dying" through the shoot, he admits that "you can’t do anything with a broken toe" as he reminisced on the shoot:

"And then, before the pandemic, towards Christmas, I ended up breaking my toe, the little toe. So Episode 3 has this whole sequence where I’m in Madripoor with Daniel Bruhl and Mackie, and I’m pretending to be the Winter Soldier, and I have to do that whole action sequence, and my toe…you can’t do anything with a broken toe. It just has to be there, and I did that whole thing with a broken toe, and I was dying, and of course, the entire time, keeping the best stoic-looking face ever."

Stan went on to admit that he broke his "little toe" after he "[got] up in the middle of the night to pee." Joking about how he's "getting older," the MCU star described how he "[rammed] it right into the corner of the wall" and didn't even realize how bad it was:

"Yeah, the little toe. And by the way, how it happened, as classically human as it all comes. You get up in the middle of the night to pee, I guess because I’m getting older, and then I’m going to pee in the middle of the night, it’s dark, you’re kind of going, you find the thing, and on my way back, of course, I’m just closer to the wall looking for the bed, basically almost there, and then just ram it right into the corner of the wall. And I’m like ‘Oh my god,’ and of course, too tired to even realize that. I’m like ‘Oh, that’s gonna be fine tomorrow,’ and the next day I woke up, and I couldn’t walk. So that’s how that happened. Not a cool superhero way to do it."

Stan described his recovery method in between takes, explaining how "two people would help me out of this boot" before taking his foot out and "just [putting[ it in a bucket of ice" until he had to get back on set.

"What we had to do in between the takes, when we had the setups, I would basically run upstairs, and then two people would help me out of this boot, and then I would just take my foot and just put it in a bucket of ice basically and just ice it the entire time until they were setting up the next shot, and then quickly take it out, put the boot back on, go out there, kick someone through a wooden table, and then repeat the cycle. That’s just how movies get made."

The injury even came on his left foot, which he described as "actually [his] stronger foot." Regardless of the pain, Stan spoke of how it wasn't "something to cry about" as he continued on filming the show:

"I might have used the other foot, I can’t remember. And the weird part is it was on my left foot, which is actually my stronger foot, I’m more of a lefty when it comes to, I guess, legs and kicks. It was my very functioning kick that was affected. But people have gone through a lot worse, it’s not something to cry about. Just cry later when you’re alone."

With the injury coming to his little toe, however, he couldn't help but joke about the situation he found himself in:

"Well, it’s the little toe, and then you’re in that thing of like ‘Really? Why?’ It just becomes that sort of ‘Why is this happening?’ kind of thing."

INJURIES AFOOT FOR THE WINTER SOLDIER

Even for Marvel's biggest action stars, injuries like this are no joke.

Stan giving the performances he gave with the injuries he sustained are a tribute to the work he's put in over the past decade, especially as he discussed the aging process he's going through. With all the jumping, running and fighting he had to bring to screen for his first Disney+ outing, he did a fantastic job not letting his pain show as he brought Bucky Barnes to life.

This also seems to continue the Captain America injury tradition after Chris Evans famously tore a muscle filming the helicopter scene from Captain America: Civil War as well. It will be interesting to see if fans hear of any more stories in this same vein later, especially with MCU stars taking on more of their own stunts going forward.