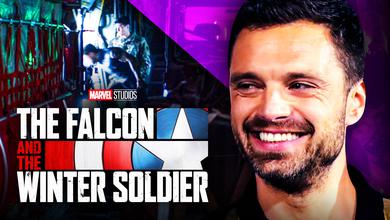 MCU stars Anthony Mackie and Sebastian Stan are currently enjoying a great deal of success with their first solo adventure with Marvel Studios, The Falcon and the Winter Soldier. Even sharing the limelight with dancing phenom Daniel Brühl and franchise regular Emily VanCamp, these two are carrying the brunt of the load as the show finds itself ranked among the MCU's best releases.

TFATWS has been praised for the past three weeks not only for its twists and turns but also its top-notch action sequences in every episode. Marvel Studios is proving how much work was put into making this show look just as good as any movie that came before it, letting Mackie and Stan fully show off their action chops as Sam Wilson and Bucky Barnes.

With that type of high-octane shooting always comes some funny behind-the-scenes moments, including that was just revealed on social media.

STAN LETS IT ALL OUT ON SET

The Falcon and the Winter Soldier star Sebastian Stan took to Instagram to post a 34-second video from the set of his Disney+ series.

The video shows both himself and Anthony Mackie in costume jumping out of the Air Force plane in Germany from "Episode 2," both of them letting out yells as they land on the foam in front of them. Stan's is particularly hysterical, screaming at the top of his lungs as Mackie bursts into laughter watching everything unfold.

The full video can be seen in the Instagram video below:

I BELIEVE I CAN FLY

While Mackie's character is blessed with technology that allows him to fly after leaping from a plane, Stan's is not so fortunate. However, he makes up for the situation on set by finding a way to send the whole crew into hysterics with his scream when he leaps from the plane.

Mackie and Stan have both shown on numerous occasions how much fun they've had filming this series, which gives the most in-depth look at both of their characters of any MCU project to date. Their chemistry as a duo can be seen both on and off camera, and it's always entertaining seeing them share such fun inside looks at the process of bringing these events to life.

Fans can only hope for more videos like this to release over the next few weeks while The Falcon and the Winter Soldier enters the second half of its season. If not, there's that recently released one-hour-long video of Daniel Brühl's dance moves to watch over and over again.

"Episode 4" of The Falcon and the Winter Soldier will premiere on Disney+ on Friday, April 9.