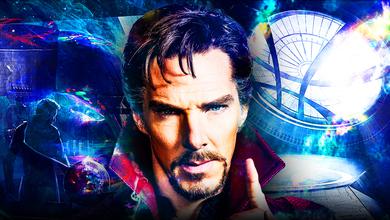 While Marvel's Phase 4 slate has a number of intriguing projects in the works from the Eternals to Spider-Man: No Way Home, fans are equally interested in the upcoming Doctor Strange in the Multiverse of Madness.

It's no secret at this point that the MCU intends to explore the multiverse in its upcoming films with Doctor Strange at the helm.

And even though Marvel Studios President Kevin Feige and Co. intend to keep details of Strange's sequel under wraps, fans are beginning to learn a little more about the Sorcerer Supreme's 2022 film.

Jo Beckett, the Script Supervisor for Doctor Strange in the Multiverse of Madness and other MCU films like Doctor Strange, Spider-Man: Far From Home, and Eternals, shared a wrap photo from the set on Instagram where her own comment teased a bit of what fans can expect in the Sorcerer Supreme's sequel.

For the caption, Becket wrote:

It’s a wrap I’m going to miss this talented lot, especially Director Sam Raimi — a master of the craft and a creative force.

The announcement of Sam Raimi as the film's director intrigued fans from the start since Doctor Strange is supposed to play a role in Spider-Man: No Way Home — a film rumored to include Tobey Maguire's Spider-Man from the original Spider-Man trilogy which Raimi directed.

But, Spidey isn't all Raimi is known for.

The director is also known for horror films, particularly the Evil Dead series, which may be why he was chosen for this particular MCU film.

In fact, one of Jo Beckett's comments seemed to confirm this in which he mentioned how the sequel's "going to be dark."

That particular tone coupled with a superhero film is something Raimi knows how to do, and it also clues in fans on what to expect from this film.

THE MCU'S FIRST FORAY INTO HORROR?

A key ingredient to the MCU's secret sauce is the studio's willingness to explore different genres and stories.

With Sam Raimi in the director's chair and from Beckett's comments about the "dark" nature of the film, it seems likely that Doctor Strange in the Multiverse of Madness will be experimenting with horror.

While that's not entirely unexpected, comments like Beckett's beg the question of what a Marvel horror film will look like and how far is the studio willing to go.

Fans may get a glimpse of the MCU delving into this particular genre this summer with the upcoming Disney+ series What If...? since a zombie Captain America and more are confirmed storylines.

But, in the meantime, more details about Doctor Strange's second solo film are sure to surface as Phase 4 ramps up, and fans discover the role of the multiverse in the MCU's upcoming slate of films and series.

Doctor Strange in the Multiverse of Madness is set to hit theaters on March 25, 2022.