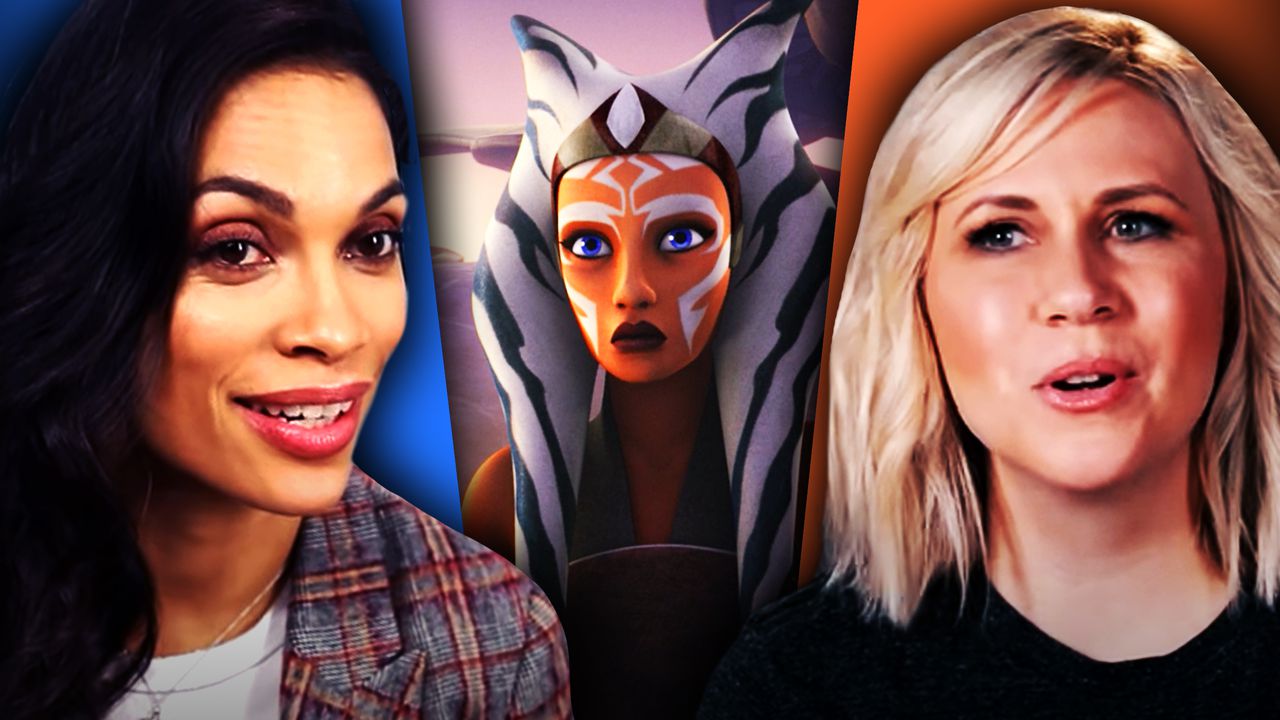 After years of waiting, the live-action debut of Ahsoka Tano finally happened in The Mandalorian Season 2, and the character’s arrival earned high praise from longtime fans of the franchise. Played by Rosario Dawson (Marvel’s Daredevil), Ahsoka quickly burst into the latest episode of The Mandalorian by being showcased in an impressive lightsaber-heavy action sequence, much to the delight of longtime fans of the character.

From that point on, it was made clear that the character is very much at home in a live-action setting, but The Mandalorian still managed to pay homage to the former Jedi's animated roots. The fan-favorite Togruta left a mark in the eyes of many Star Wars diehards through the years, due to her journey being chronicled in Star Wars: The Clone Wars and Star Wars: Rebels.

The actress involved in that aforementioned journey is none other than Ashley Eckstein, who provided her voice for Ahsoka Tano in virtually every appearance of the character in the animated realm of Star Wars. Now, after the successful live-action debut of her character, Eckstein took to social media to share her thoughts about Ahsoka's impact to fans.

In an Instagram post, Ashley Eckstein, who voiced Ahsoka Tano in Star Wars: The Clone Wars and Star Wars: Rebels, shared her reaction to the live-action debut of her Star Wars character in The Mandalorian Season 2.

After lending her voice to the character for 12 long years, Eckstein opened up about the legacy of Ahsoka in The Clone Wars, admitting that the former Jedi “became the eyes of the audience” as the show progressed.

Millions of people are meeting Ahsoka for the first time after watching her in The Mandalorian and I’m excited for them to hopefully go back and watch her journey in The Clone Wars and Rebels. Millions of fans already know Ahsoka and her presence has come to mean more to them than words in a script.

In Star Wars The Clone Wars, Ahsoka became the eyes of the audience. Viewers experienced the show through Ahsoka, and even though these stories happened in a galaxy far, far away, her feelings and emotions are very relatable to our everyday lives. Ahsoka’s strength has inspired, changed and literally saved millions of lives all over the world.

The veteran voice actress also reflected on how Ahsoka “has become a beacon of hope, light and genuine goodness” towards the audience, pointing out that everyone’s relationship with the character is “very different” since she “triggers the memory of a certain point in a person’s life where she’s inspired them.”

In turn, Ahsoka has become a beacon of hope, light and genuine goodness. Everyone’s relationship with Ahsoka is very different because she triggers the memory of a certain point in a person’s life where she’s inspired them. Even in the darkest of times, Ahsoka brings people joy and that’s what truly matters.

Lastly, Eckstein unveiled a heartfelt thank-you message to fans while also hoping that she gets to play the character again in a future project.

Ahsoka taught us that, “You don’t need to carry a sword to be powerful...” and Dave Filoni reminded me that kindness is powerful. After 12 years (and hopefully many more to come!) of having Ahsoka in our lives, #AhsokaLivesInAllOfUs now. I am blown away by everyone’s kindness. I’ve read all of your messages, DM’s, comments, text messages and emails and to say “thank you” does not even feel adequate enough to express what your kind words mean to me.

It’s my wish that Ahsoka continues to bring people joy, light and most importantly hope. This is the way of Ahsoka Tano.

At this point, it's clear that Ahsoka Tano served as the face of the animated branch of Star Wars, and Ashley Eckstein's portrayal of the character is no doubt iconic in the eyes of many fans. When it was rumored that Ahsoka will debut in The Mandalorian, fans were initially expecting that Eckstein would reprise her role in live-action, but these hopes were squashed by the report that Rosario Dawson would play the character instead.

Still, it's good to see that fans are responding well to Dawson's portrayal, and the added praise and support of Eckstein should further elevate the live-action version of the character. Boasting an impressive and consistently great portrayal of Ahsoka in the animated setting, Eckstein's heartfelt tribute is a fitting summary of how the character resonates with fans.

Ahsoka's arrival in The Mandalorian might be new to casual viewers, but longtime fans are fully aware of the lasting impact of the character on the interconnected narrative of Star Wars. From the sound of things, Eckstein's statement indicates that Ahsoka's inclusion is more than just to progress the narrative, but her appearance should instead serve as a reminder of the ups and downs of the character in the past, ultimately giving a hopeful message to fans to keep on going despite the hardships.

Given the popularity of Ahsoka, there's a good chance that Eckstein will be back to provide her voice for the character in a future animated project. As for the live-action version of the character, it's safe to say that Ahsoka's journey is just getting started, and more will be revealed down the road.