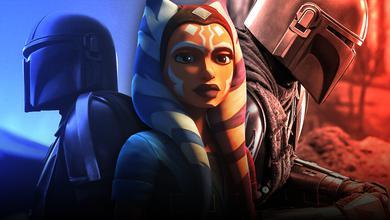 The brand new episode of The Mandalorian Season 2 has been the main topic of discussion among Star Wars fans. This is due to the much-awaited live-action debut of Ahsoka Tano, and the character's arrival didn't disappoint.

Directed by The Clone Wars creator Dave Filoni, the arrival of Rosario Dawson's Ahsoka Tano delivered hard-hitting lightsaber action while also providing viewers concrete information about the origins of Baby Yoda a.k.a. Grogu. Filoni's involvement proved to be the icing on the cake for "Chapter 13" since the episode paid homage to the animation realm of Star Wars.

Given that, it's no secret that there is a stockpile of Easter eggs from "Chapter 13," and a good chunk of those are from The Clone Wars and Rebels. Now, eagle-eyed viewers may have noticed a blink-and-you'll-miss-it reference that is closely tied to Ahsoka's vast backstory.

The latest episode of The Mandalorian Season 2 seemingly featured an appearance from the Morai, an owl-like bird creature that is closely tied to Ahsoka Tano. The convor can be seen at the 15:29 mark of "Chapter 13."

The Morai debuted during Star Wars: Rebels, with the convor appearing multiple times alongside Ahsoka. On top of that, the series finale of The Clone Wars also featured the owl-like bird creature showing itself to Darth Vader during the episode's final moments.

The creature's backstory was explained in detail when Ezra Bridger discovered the World Between Worlds. That particular plot point revealed that the connection between Ahsoka and the Morai was established when one of the three Mortis Force users, the Daughter, saved the latter by transferring her life essence. At this point, the presence of the Morai essentially serves as a reminder of Ahsoka.

The Morai's inclusion is a clever nod to Ahsoka's animated life, and it's safe to say that Filoni placed the creature in the background for diehard fans to uncover on their own. In a way, viewers who are unaware of Ahsoka's impending debut in this episode would no doubt be dumbfounded when they see the Morai in the background of that particular sequence, serving as a reminder of the former Jedi's arrival moments later.

Regardless, it's a fitting addition to a jampacked episode of The Mandalorian. Not much is known if Ahsoka will reappear again during the later episodes of Season 2, but it's likely that the character will not be featured again, at least for this season, especially after the reveal that she is pursuing Grand Admiral Thrawn on her own high-stakes mission.

Interestingly, previous rumors revealed that Ahsoka could end up having her own Disney+ series down the road. If this show ever sees the light of day, then another appearance from the Morai will be imminent.