The past few weeks have been a huge step forward for multiple properties in the DCEU. Wonder Woman 1984 is inching closer to its theatrical release after the massive successes of the original Wonder Woman in 2017, and an official announcement finally arrived confirming the release of the Zack Snyder Cut of 2017's Justice League on HBO Max in 2021.

After the Snyder Cut was made official, rumors started swirling concerning other DC Comics projects that could earn the same treatment in the future. DC Entertainment's history of the studio meddling with the final cut of their feature films has been well documented over the years, leading to cries for releases like the Snyder Cut and the Ultimate Edition of Batman V Superman: Dawn of Justice not long after the original's release. Another image has just released that potentially teases the potential future of yet another DC film's director's cut.

In an Instagram Story post, Suicide Squad director David Ayer released a new photo from the movie of Karen Fukuhara's Katana and Jai Courtney's Captain Boomerang. The photo shows Katana being controlled by the movie's main villain, the Enchantress. 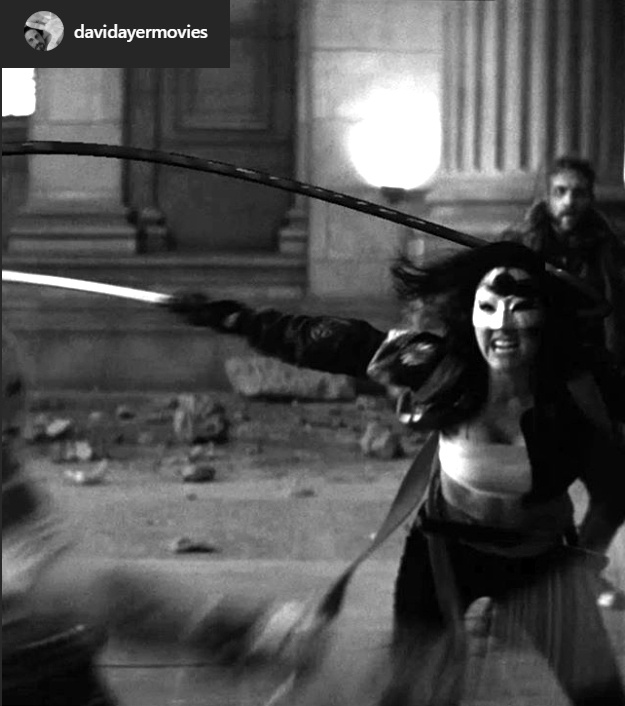 As Zack Snyder released tons of Justice League images in black and white prior to the Snyder Cut's announcement, the black-and-white coloring of this Suicide Squad image has some fans wondering if this is a sign for a coming Ayer Cut.

David Ayer has been at the forefront for years campaigning for his own cut of Suicide Squad to finally be released to fans. Reports have flooded the news feeds for years describing Ayer's disappointment with the Warner Bros. and DC Films for changing his dark and eerie film into a a much more fun and comedic film than he had originally intended. A more detailed claim has even come out recently of Ayer blaming former DC Entertainment CCO Geoff Johns of completely breaking the timeline that he had detailed so well during production.

There are no confirmations or rumors pointing toward the Ayer cut of Suicide Squad being released in the future, although there may be much more potential now that the Snyder Cut has been given the green light for its debut. The movie's sequel, James Gunn's The Suicide Squad , is also currently in post-production in preparation for international release on August 6, 2021

Will Deadpool 3 Have a Massive Budget? Ryan Reynolds Responds