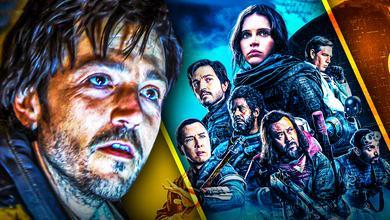 There's an abundance of live-action Star Wars content coming to Disney+, and fan anticipation is off the charts.

In the immediate future, the first season of The Book of Boba Fett will be debuting in December, with The Mandalorian Season 3 coming shortly thereafter. Once those projects have been completed, Dave Filoni and Jon Favreau will break ground on Ahsoka, as well as other shows tied to Mando's storyline. Also coming in 2022 is Obi-Wan Kenobi, which will see the long anticipated return of Ewan McGregor as the titular hermit Jedi Master.

With all the excitement going in the direction of these shows, there's one series that's flown a bit under the radar: Star Wars: Andor. A prequel to Rogue One: A Star Wars Story, Andor will follow Cassian Andor's early days with the Rebel Alliance in the first spy thriller set in the galaxy far, far away. Production of the first season, which will consist of 12 episodes, is currently underway.

Due to the decision to shoot the series with largely practical sets and real locations, as opposed to The Volume that the other shows will be making great use of, Andor's production has resulted in many leaked images. Eager fans have gotten a look at some new locations that will appear, and the latest pictures to surface reveal that another familiar face will be joining Cassian in his mission to free the galaxy...

A set video from Star Wars: Andor posted by YouTube user Mia Patmore and subsequent screenshots shared on Reddit revealed that Duncan Pow will be reprising his role of Ruescott Melshi in the Disney+ series. Melshi, a sergeant who participated in the Battle of Scarif, will be returning to screens since his debut in Rogue One: A Star Wars Story.

A picture of Pow, as well as series star Diego Luna, was taken at the Cleveleys set and can be seen below:

He wasn't a standout character in Rogue One, but Melshi's return to the screen in Andor is a pretty exciting addition to the cast.

For all the inconsistencies and retcons that have gone down in the new canon, the characters and events tied to the Rogue One storyline have been very tight-knit and feel extremely connected. The addition of Melshi to the plot of Andor will show how Cassian came to trust the former to such a high degree that he'd give him command over the surface attack on the Imperial citadel tower at Scarif.

"We've all done terrible things on behalf of the Rebellion," Cassian had told Jyn Erso before Rogue One left Yavin for their final mission.

Standing right behind him among the sea of Rebel volunteers was Melshi. With the two characters working together at some point in Andor, Star Wars fans will get a chance to see what kinds of things the soldiers had to do, beyond the brief execution of an informant Cassian performed in Rogue One's early moments.

Melshi is just one of many characters set to join Andor from the ranks of the Rogue One cast. Accompanying him will be Rebel leaders Mon Mothma and, allegedly, Bail Organa, as well as the rumored appearance of Grand Moff Tarkin. And, while he may not be participating in the fun immediately, Cassian's trusty droid K-2SO will eventually be returning with his usual combat efficiency and zingers.

Fans can likely expect to see ramped up marketing for the series at next year's Star Wars Celebration, as it likely won't be dropping until the summer. There's still a bit of a ways to go until Andor's first season is shared with the world, but everything about the series so far looks and sounds extremely promising.

A spy thriller in Star Wars promises to be unique, and the addition of a character like Melshi serves as great connective tissue between the series and Rogue One.