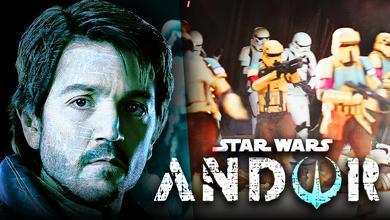 Lucasfilm and Disney may not have brought a huge amount of news for Star Wars Day 2021, but diehards know the franchise is hard at work bringing new content for release in the next couple of years. This week alone, fans have enjoyed the debut episode of Star Wars’ next animated series The Bad Batch while getting excited for the start of production for Ewan McGregor’s Obi-Wan Kenobi limited series.

Cameras are also rolling for Diego Luna’s Andor series, which will explore a new story set about five years before the events of Rogue One: A Star Wars Story. Plot details are expectedly being kept under wraps for now, although early looks at the project tease new locations and characters that haven’t seen much screen time throughout the saga to date.

A new sneak peak at this series confirms some of these introductions after a similar leak just the other day.

More set photos have surfaced from the on-location production of Star Wars: Andor in Cleveleys, England. The images show Diego Luna’s titular hero alongside coastal defender stormtroopers, making a return after first appearing in Rogue One.

NEWS: Set photos from ‘Star Wars: Andor’ featuring Diego Luna and a Shoretrooper have surfaced via a filming location in the UK! 🎬 https://t.co/YIgj0odQrK pic.twitter.com/ma9nxrouIq

The first four images feature Diego Luna alongside a coastal stormtrooper on an unidentified planet, which has a palm tree in the background of one image.

The images above showcase more looks at the coastal stormtroopers. These characters were first introduced in the Star Wars: Galaxy of Heroes mobile game in 2014 before debuting on screen in Rogue One.

Luna and the trooper are seen in front of a beach and the ocean in the last two shots. This looks like the two could be in character here, although it's unclear what's taking place in the scene.

A SMALL TEASE FOR THE NEXT DISNEY+ ADVENTURE

It's difficult to pin down exactly what's happening in this scene with Cassian Andor and the Shoretroopers, although the clones' return should be an exciting addition to this solo series. Luna and these newer soldiers first interacted with each other about five years ago in Rogue One, and with this show being set before that movie, it will be interesting to find out how they come into play for this adventure.

These new photos combined with earlier looks showcasing a massive intergalactic town in a separate location tease the massive scale Lucasfilm is utilizing for Cassian's first story on his own. The titular hero will be expanding on his experience with the Rebel Alliance, and it's becoming clear that the studio is holding nothing back in making sure the character gets his due shine before his story in Rogue One.

Andor is currently filming and will release on Disney+ sometime in 2022.