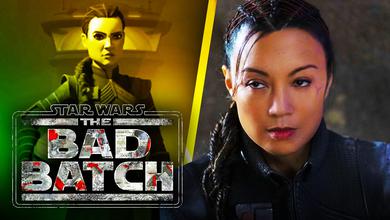 Even with Star Wars Day 2021 in the rearview mirror, fans of the long-standing franchise are hyped and looking forward to a fantastic run of new content for the galaxy far, far away.

The last few days have provided a handful of set photos for multiple live-action adventures, including the return of Shoretroopers in Diego Luna's Andor series on Disney+. The streaming service will also bring Obi-Wan Kenobi next year, which Ewan McGregor is currently shooting alongside an all-star cast including the likes of Hayden Christensen, Kumail Nanjiani, and more.

As fans look to the future, the present remains bright with the debut of the first episode of The Bad Batch on Star Wars Day itself. The animated follow-up to The Clone Wars brings the team of defective, enhanced clones together for a new run through the galaxy, which is also set to expand on other characters previously introduced in the Star Wars mythos.

One of those characters sees the spotlight in the latest leak surrounding the 16-episode journey.

A leak from Reddit revealed a full look at the animated version of Ming-Na Wen's Fennec Shand, who will appear during Season 1 of The Bad Batch. This marks her first run in Star Wars animation after making appearances in four episodes of The Mandalorian.

Fennec Shand made her mark on the Star Wars universe when she arrived in Chapter 5 of The Mandalorian in 2019. She appeared in the final three episodes of Season 2 as well before a post-credits scene in Chapter 16 revealed that she will co-star in The Book of Boba Fett alongside long-time star Temuera Morrison as the iconic bounty hunter.

Ming-Na Wen continues her run as one of the iconic sci-fi and action actresses in the game today, returning for her second of three confirmed Star Wars projects and her first in the realm of animation. She's already made a name for herself as one of Disney's most memorable figures after voicing the leading heroine in 1998's animated Mulan and co-starring in all seven seasons of Marvel's Agents of S.H.I.E.L.D. as Agent Melinda May.

Wen will be one of only a handful of actors to embody their Star Wars character in both live-action and in animated form, establishing a greater sense of continuity between the two popular mediums of galactic storytelling.

Episode 2 of The Bad Batch is set to premiere tonight on Disney+. Ming-Na Wen is confirmed to return at some point in this series before she takes a leading role in 2021's The Book of Boba Fett on Disney+.