The Elite 8 round of the Star Wars Madness Tournament has come to a close, seeing a few blowouts and some major upsets! The four highest rated Star Wars movies entered the fray coming off of a first round bye to take on the Round One victors , leading us to some classic showdowns for the ages. The original trilogy films faced off against some of the more recent films that showed some interesting foils, and the first two pictures under the Disney era went head-to-head. If the first round forced our readers to make some tough decisions, then the Elite 8 made them feel Kylo levels of conflicted. Now, the stage has been set for the Final 4, and we know which Star Wars movies are nearest to fans' hearts. Check out the results below!

In the first matchup of the Elite 8, we saw the iconic middle chapter of the Original Trilogy face off against the polarizing conclusion to the Skywalker saga, and it didn't go well for the Resistance. The Empire Strikes Back proved to be as dominant as the titular faction was at the Battle of Hoth, taking The Rise of Skywalker in its hands and crushing it like Captain Antilles. Empire's victory is about as surprising as Luke's whooping at the hands of Darth Vader - not at all. The Rise of Skywalker tried to tie up all nine films in the saga to create a satisfying conclusion, but ultimately the story seemingly upset more people than it satisfied as key moments from the past were undone to serve Skywalker's story. The Empire Strikes Back is the golden standard of Star Wars - a harrowing tale that challenges the heroes and the audience, but strengthens our connection with the story and leaves an impact on generations of fans. The Rise of Skywalker had a solid run, but much like the padawan trying to escape the Jedi Temple, it stood no match against the Empire .

Our second showdown saw the introduction of hero Luke Skywalker take on his final act, a lifelong adventure that starts and ends with a twin sunset. Star Wars: A New Hope started it all and proved beloved for its divisive opponent to handle, taking down The Last Jedi convincingly with a Snowspeeder and tow cable. A New Hope is the definitive modern fairy tale, a story allowing young fans to see themselves in Luke Skywalker as they strive for greater things. The Last Jedi gave us an unfamiliar Luke, one who was jaded and finished with the ways of the Jedi and the Force itself following a critical error with his family, though he finds himself again for one last sacrificial act. A symbol of hope and optimism, this depicition didn't sit well with many fans, a sentiment heavily reflected by the catastrophic demise of Episode VIII following a not very Elite performance. The Last Jedi did its best to try something new with the Star Wars universe, but A New Hope bullseyed it like a Womprat and moves on to continue its fight for freedom.

The third head-to-head saw two trilogy cappers duke it out, resulting in a major upset for fans of the Original Trilogy. Return of the Jedi is a triumphant conclusion to George Lucas' story, but Revenge of the Sith crushed that happy ending like Padme's heart, claiming the day and moving on to the Final 4. Episode III's victory actually isn't all that surprising; the film is largely regarded as the best of the Prequel Trilogy but often gets overlooked, despite being a perfect example of what Lucas' Star Wars is. Revenge of the Sith has the flashy fights, the heartbreaking drama, the unparalleled scale, an incredible plot, and a hopeful conclusion that fans of the Prequel generation latched onto and are now giving the recognition that the film deserves. Return of the Jedi never ceases to bring good feelings as the heroes celebrate with the Ewoks and we see Anakin's return to the light, sending the ultimate message of love and friendship. Unfortunately for Jedi, the dark times proved to be too much for the Rebellion to handle, as Revenge of the Sith continues its tendency to kill Jedi by dealing the saga's original swan song a stunning defeat.

The final battle of the Elite 8 round saw the early days of the Disney Star Wars era face off, ending in yet another upset. The Force Awakens brought Star Wars back to the big screen in Death Star exploding fashion, taking in over $2 billion at the box office and making the galaxy far, far away the topic of hot discussion again. It was followed up by Rogue One: A Star Wars Story , the first live-action spinoff film in the Star Wars universe that proved to be highly succesful in its own right, delivering on the promise of a gritty war film between the Rebels and the Empire. A fun adventure, Episode VII is frequently criticized for its heavy similarities to the plot of A New Hope and lack of originality, but delivered in introducing us to a solid group of compelling new characters. Although we didn't get as much time with the characters of Rogue One , the heroes formed a tight bond fairly quickly and took part in one of the most compelling Star Wars battles to date, despite the pre-determined outcome. The final result of this competition was always going to be a coin toss, and it appears that the glorious end for our rebellious heroes was too much for the Resistance to handle, wiping the Sequel Trilogy out - all of them - of the tournament and sending Rogue One on to the Final 4. 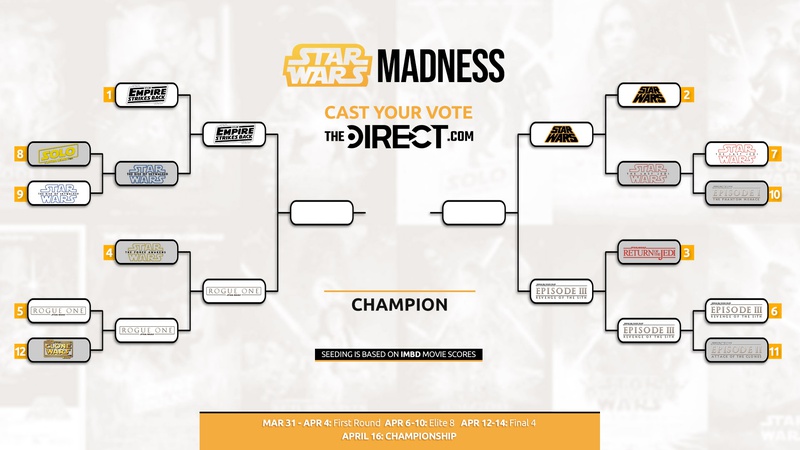