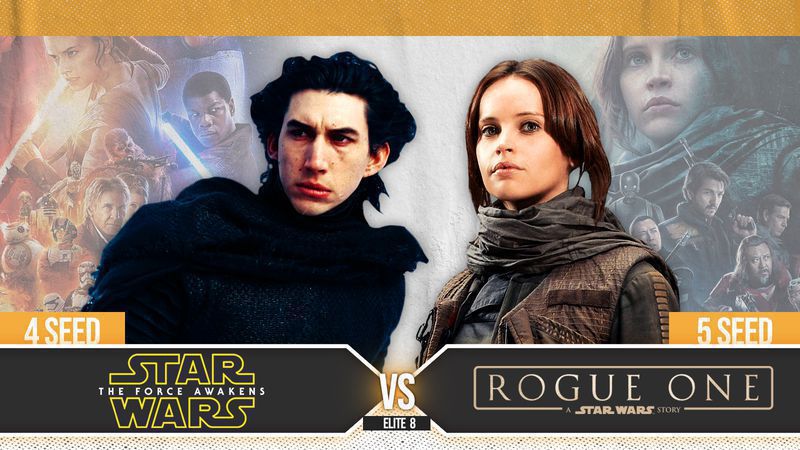 It's time for yet another matchup in the Star Wars Madness Tournament, as the first two Disney-era films go head to head! The Mouse relaunched Star Wars in 2015 with The Force Awakens, an enormously successful film so well-received that it earned itself a first round bye. Lucasfilm launched a new style of storytelling with Rogue One: A Star Wars Story, the first spinoff film set in the galaxy far, far away that was also met with massive fan approval and a first round landslide win. The fandom has been more divided since then, but during this brief period most everyone seemed to be happy with the new state of Star Wars. What had the bigger impact on fan satisfaction? Was it Rey's fun first steps into a larger world, or was it the Rebel Alliance's first major victory that was met with thunderous applause? VOTE BELOW!

Synopsis: Three decades after the Empire's defeat, a new threat arises in Kylo Ren and the militant First Order. Defected stormtrooper Finn and the scavenger Rey are caught up in the Resistance's search for the missing Luke Skywalker.

Pros: Ten years after the prequel trilogy ended, Star Wars came out of lightspeed onto the big screen under Disney with The Force Awakens. The greatest strength of this film is the new characters that were introduced. The entire introductory sequence for Rey immediately tells us everything we need to know about the character’s circumstances, with the lack of dialogue allowing John Williams’ score to do the talking to add a great deal of weight to the film. Finn’s arc as a Stormtrooper-turned-Big Deal showed a great deal of bravery and commitment, forging nice friendships with both Rey and Poe along the way. Kylo Ren’s arc was the most interesting of all, giving us a different look at the dark side and being pulled to the light. It was nice to see our old heroes again, and Han’s demise was shocking but defining for Ren’s character. While the film was imperfect, the buildup to the release brought an unparalleled level of excitement as the fun marketing campaign and merchandise release got us ready for a new era of Star Wars.

Cons: Despite the great new characters set up, the film borrows nearly its entire plot from A New Hope. The lack of originality in the story was disappointing, as were the galactic circumstances of another Empire vs Rebellion-style conflict. Having yet another Death Star-scale threat was a bit silly and Starkiller’s destruction didn’t seem to be nearly as difficult as destroying the first two planet killers. Rey’s ability to excel at everything she does and her victory over Kylo Ren after just learning about the Force left little room for growth in her skills. Ren's defeat, despite his injuries and emotional state, really wasn't at all realistic given the vast difference in skill levels between the combatants. This did reduce his credibility as a threat to Rey, who in turn never seemed to be truly in danger. The limited exposition on the state of the galaxy made the scope of the conflict somewhat confusing, a problem that went unresolved in the following films as well, and the lack of a scene with all three of our original heroes together was a huge missed opportunity. Luke Skywalker's omission from the majority of the film was understandable, but it's hard not to imagine what kind of fan reaction would've occurred had he been the one to pull his father's lightsaber out of the snow...

Synopsis: In a time of conflict, Jyn Erso (Felicity Jones) and a group of unlikely heroes band together on a mission for the Rebel Alliance to steal the plans to the Death Star, the Empire’s ultimate weapon of destruction.

Pros: The first spinoff film set in the Star Wars universe, Rogue One excelled at adding new weight to Episode IV by showing us how much was sacrificed to get the Death Star plans into the hands of Princess Leia. Jyn Erso’s story of finding purpose and resolve and the bonds forged with the Rebels she meets along her journey are touching, and K-2SO takes no names. Seeing Saw Gerrera translated from animation into live-action was a treat, and the Battle of Scarif was the gritty warfare fans have been anticipating for decades. While George Lucas was always one for happy endings, the demise of the heroes in Rogue One was completely necessary and showed a lot of backbone on the filmmakers' part for committing to it. Director Krennic was an excellent villain with a neat tie to Jyn, and his scenes with digitally re-created Grand Moff Tarkin certainly can't go unmentioned. Darth Vader’s hallway rampage speaks for itself.

Cons: Because the film is a spinoff, we only had a limited amount of time to get to know our characters. As a result, any hero not named Jyn wasn’t able to fully develop and shine on their own right, despite the great moments they all had. The film tends to drag a bit when the story takes the characters to Eadu, but ramps it back up shortly thereafter. Actually stealing and transmitting the Death Star plans seemed to be accomplished with relative ease, as the majority of the work happened after Jyn and Cassian were inside the vault, and the Master Switch and Bohdi needing to plug the cord into the ship seemed a bit excessive. Due to so much of the film being re-written and re-shot, many chunks of the final battle that were glimpsed in the trailers had to sit on the cutting room floor, with the possibility of an even grander battle going unfinished.

Lauren Rouse - This is so hard they're two of the best Star Wars movies! I think Rogue One is better as a film but Force Awakens was such a great kickstart to the new Star Wars era.

Jack Pues - In my opinion, The Force Awakens is a little cheesy. I can feel that over the years it will become more dated in my eyes. However, it introduced great characters that I enjoyed watching the last few years. But I give Rogue One the edge for its commitment to being a gritty war film. The crew was so charming, and demonstrated the price that comes with their rebellion. And that Vader scene!! 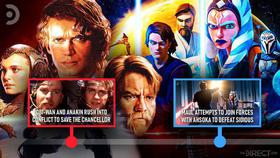 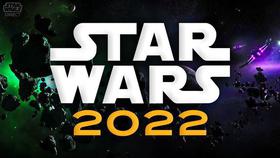