STAR WARS MADNESS ELITE EIGHT: #1 The Empire Strikes Back vs. #9 The Rise of Skywalker

Welcome to the Elite 8 round of the Star Wars Madness tournament ! The results of the first round are in with few surprises as the victors are set to take on the films that received a Round One bye. Right below is our updated bracket: 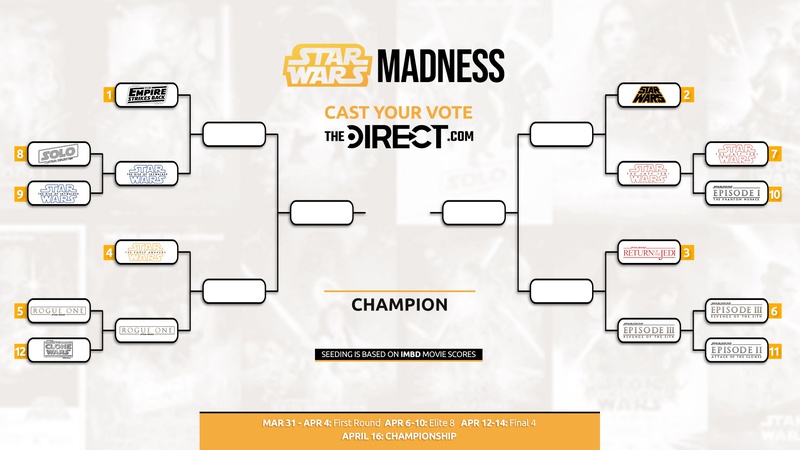 Now it's time to set the stage for the first matchup of the Elite 8. The highest rated Star Wars film, The Empire Strikes Back, is in the Star Destroyer as the #1 seed looking to advance to the Final 4. Coming off a somewhat surprising victory in the first round, The Rise of Skywalker is prepared to do whatever it takes to topple the Emperor of the franchise. Empire is commonly regarded as the best Star Wars film in the saga and one of the greatest movies of all time, and Skywalker has proved to be a polarizing conclusion to the story leaving many fans divided. Which will go farther: Luke Skywalker's hand into the bowels of Cloud City or Ben Solo down the infamous pit? Does the Empire's finest hour remain untouched in the hearts of the fans, or has the ultimate victory for the Resistance taken its place? VOTE BELOW!

Synopsis: After the Rebels are brutally overpowered by the Empire on the ice planet Hoth, Luke Skywalker begins Jedi training with Yoda, while his friends are pursued by Darth Vader and a bounty hunter named Boba Fett all over the galaxy.

Pros: Largely regarded as one of the greatest sequels of all time, The Empire Strikes Back is practically a perfect film. Our heroes are all challenged in physical and emotional ways, forcing them to rely on each other and grow. The original introduction of Yoda gave us a far deeper look into how the Force works, and the lesson about belief as he lifts Luke’s X-Wing is the thematic crux of the movie. Darth Vader cemented himself as the most badass villain in cinematic history, proving to be smart, cunning, ruthless, and terrifying, all the while also being human. Han and Leia's blossoming relationship makes Lando's betrayal hit even harder, and John Williams' score elevates the film to an insurmountable tier. The carbon freezing sequence is one of the most touching in the saga, and the ensuing lightsaber duel and Vader’s revelation of Luke’s parentage are some of the most suspenseful sequences in all of Star Wars. Empire proved that the success of Star Wars wasn't a fluke, representing the formerly unheard of idea that a sequel could be better than the original and proving Star Wars was here to stay.

Cons: That kiss between Luke and Leia is looking pretty weird now. Like the other members of the original trilogy, some of the visual effects haven't exactly aged like fine wine. There are some points during the Battle of Hoth that this is blatantly apparent, although we have to keep in mind that the movie is nearly 40 years old. There are some points where it's obvious Yoda is a puppet, but that gets quickly overshadowed by John Williams' score, the depth of what Yoda is trying to say, and Mark Hamill's belief in the character. It's almost funny how obvious it is that they had Hamill cram his fist into his sleeve when his hand was sliced off, as they clearly didn't have the luxury of digitally removing it. By and large, these criticisms are more a critique of the evolution of filmmaking as opposed to something done wrong by the filmmakers, who were producing state-of-the-art effects for their time.

Synopsis: When it's discovered that the evil Emperor Palpatine did not die at the hands of Darth Vader, the rebels must race against the clock to find out his whereabouts. Finn and Poe lead the Resistance to put a stop to the First Order's plans to form a new Empire, while Rey anticipates her inevitable confrontation with Kylo Ren.

Pros: The final chapter in the Skywalker saga, The Rise of Skywalker put a capper on the sequel trilogy and closed the book on the mainline of films – at least for now. Kylo Ren was undoubtedly the best character to be introduced in the trilogy and getting to witness the limited amount of Ben Solo that we did was great. The scene between Kylo and Han was by far and away the best in the film, giving a nice bit of closure to the massive event that took place in Episode VII . C-3PO was an unexpected highlight in the humor department, as was Babu Frik, who quickly became a fan favorite. The maestro John Williams can’t go unmentioned, as he turned in another great soundtrack, with the song “The Rise of Skywalker” being a standout.

Cons: At The Direct, we highly value honesty. This is a messy subject to touch, one that requires clarification that this take is all personal opinion . There are too many issues with the film to list, so let’s deal with the big ones. Palpatine’s return was completely unnecessary and highly detrimental to the saga as a whole. The announcement of his return (a reference in the opening crawl to a message that was shared ahead of time on Fortnite) was underwhelming and lacking in suspense, but more egregious is that his mere existence makes Anakin's sacrifice pointless and renders the Chosen One irrelevant. Kylo Ren had been set up to be the big villain, but instead he and the Knights of Ren had a weird game of hide and seek going with Rey and co. until his abrupt turn back to the light. The editing and pacing of the film were all over the place, a result of  J.J. Abrams’ style and a constantly re-written script with a high-speed story. Ghost Luke looked poor with the wig and hue, and the way they tried to incorporate Leia sadly seemed off. The totally unnecessary death of Ben Solo left a bad taste in many fans' mouths, as he was a blossoming new character with infinite potential - this habit of Skywalkers dying due to Force exertion lacks support in other Star Wars works and makes little sense. Omitting Anakin in the trilogy seems criminal, and Rey taking the name Skywalker makes little sense for the character or the message of the film and the trilogy. The highly anticipated conclusion ended up closing out the saga in highly divisive fashion, when it could've been a triumphant unifier.