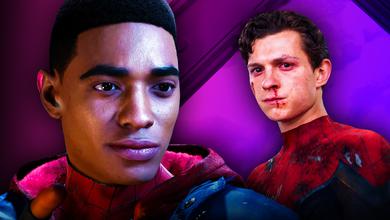 The currently untitled Spider-Man 3 is a hotly anticipated project this year mainly because of the film's growing ensemble combined with the multiverse-related rumors in the past months. Directed by Jon Watts, the movie will see the return of Tom Holland to the titular role alongside Spider-Man mainstays Zendaya, Jacob Batalon, and Marisa Tomei.

At this point, Spider-Man 3 is expected to deal with the fallout of Far From Home's shocking ending, but multiple reports suggest that the multiverse will play a major role in that aftermath. Several legacy Spider-Man characters like Tobey Maguire and Andrew Garfield are rumored to join the upcoming MCU film, potentially bringing together all three Spider-Men for a game-changing adventure.

It's currently unknown if other versions of Spider-Man will also arrive in the threequel, but at least one actor is willing to return to join the big-screen ensemble.

PS4 SPIDERMAN TO THE MCU?

When asked about the possibility of returning as the web-slinger for a potential live-action role in the Tom Holland-led Spider-Man 3 or even in the upcoming Into The Spiderverse sequel, the actor admitted that he will do so “in a heartbeat,” pointing out that he “would love to explore the role in any role:"

“Oh, in a heartbeat. I would love to explore the role in any other world. I was such a huge fan of Into the Spider-Verse, and it was nice they gave a little tip of the hat to our Earth 1048 Spider-Man. We were all extremely honoured and freaked out when we saw it.”

Still, Lowenthal insisted that he hasn't been approached to play Spider-Man on the big screen:

"I have not been approached for that, but I certainly hope they do. I love the new Spider-Man films too. Basically, I am open to any Spider-Man going from here on out."

INTO THE MCU'S SPIDERVERSE

Yuri Lowenthal played an iconic Spider-Man in the video game realm of the web-slinging franchise, and his return in live-action would be a welcome sight for gamers worldwide. The actor's excitement is clearly a good sign, and it will be interesting to find out if he does appear in the projects that were mentioned.

Lowenthal's inclusion as Peter Parker in Spider-Man 3 might be wishful thinking for some, but Marvel is best known for taking risks and giving surprises that viewers will not see coming. If the rumors are proven to be true, then a full-blown multiverse adventure might be in store for the threequel, laying the groundwork for Yuri's live-action debut as the web-slinger (even for a short cameo).

As for the Into the Spiderverse sequel, the actor's return is a no-brainer, considering that he already pointed out that his version of Spider-Man was already included as an Easter egg in the first film. On top of that, the craft of voice acting is also right in his wheelhouse, so a seamless transition may happen.

Whether Spider-Man 3 ties everything together remains to be seen, but it's safe to say that the future of Spider-Man is bright in all forms of media, and the Marvel hero is here to stay.