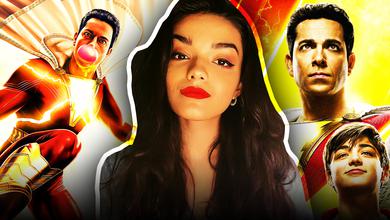 The DCEU shows no signs of slowing down anytime soon.

Shazam! Fury of the Gods, the anticipated sequel to 2019's Shazam! is currently slated for a June 2, 2023 release is rumored to begin filming in May. The sequel marks the return of director David Sandberg and Zachary Levi as the adult hero personality to Asher Angel's Billy Batson to tell the next chapter of this character's story and that of his newfound family with their own superhero personas.

But it now appears a new face will be joining the cast of Shazam 2.

RACHEL ZEGLER JOINS THE CAST OF SHAZAM: FURY OF THE GODS

According to TheWrap, Rachel Zegler from Steven Spielberg's West Side Story will be joining the cast of Shazam! Fury of the Gods in a key role.

Zegler is a relative newcomer in the entertainment world. Her role as Maria for Spielberg's version of the classic musical marked her first big break, which audiences have yet to see due to COVID-19 delayed and rescheduling. However, audiences will finally see her in the role originally played by Natalie Wood when West Side Story is released on December 10, 2021.

Very little is known about her role in Shazam! Fury of the Gods; however, her casting is significant in that Zegler becomes the second Columbian American to be cast in a major role in a DC superhero project following Sasha Calle as Supergirl in The Flash.

As the sequel looks to expand on the world first established in Shazam!, the possibilities for just who Zegler could play are extensive. However, there has been buzz for some time that three evil sisters will serve as the villains in Shazam!: Fury of the Gods.

It's also been rumored that they will be of varying ages, with the youngest being a teenager. It's highly possible Zegler could be playing the youngest of this trio of sisters considering that her role is considered significant in the film.

Fans should learn more about the sequel and its cast as pre-production wraps and filming begins in May.