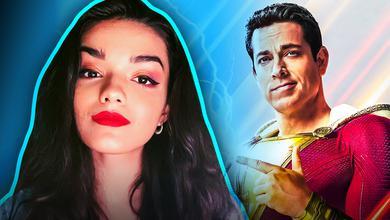 Among the DCEU's upcoming slate is Shazam! Fury of the Gods, the sequel to 2019's Shazam! starring both Zachary Levi and Asher Angel as Billy Batson.

Unlike the SnyderVerse or James Gunn's upcoming The Suicide Squad, the Shazam! films stand apart from the recent DC film library due to their kid-centric cast and lighter, comedic tone.

However, returning director David Sandberg promised more action in the sequel and a few new characters that fans are now getting to see as part of the film's cast.

Earlier this year, West Side Story's Rachel Zegler was reported to have joined the cast of the Shazam! sequel in a mysterious key role.

Now that filming is underway, video and photos of the actress in a gold costume have been shared online.

AHHH RACHEL IN HER SHAZAM COSTUME, SHE LOOKS SO BADASS AND BEAUTIFUL LOOK AT HERRRRRR. Creds to Jachel_updates on ig. pic.twitter.com/QhFtRjEMsx

One of the early rumors circulating about Shazam! Fury of the Gods is the three sisters will serve as the sequel's villains.

Since Helen Mirren was cast as Hespera and Lucy Liu as her sister Kalypso, it is expected that Zegler was cast as the third sister.

rachel zegler in her outfit for shazam fury of the gods pic.twitter.com/yc7PngCMDX

According to a recent report from Murphy's Multiverse, Rachel Zegler's character is being referred to as Anne, who develops a relationship with Asher Angel's best friend, Freddy Freeman, played by Jack Dylan Grazer.

The report also described Zegler filming on a rooftop wearing golden armor, just like what she's wearing in the above video and photos.

These images and video from the set appear to support the rumors fans have been hearing about Zegler's character in Shazam! Fury of the Gods.

If her character is hiding her own powers and villainous identity, it will be an interesting comparison to Billy Batson and his adoptive siblings' doing the same with their own newfound superhero personas.

Zegler recently gained attention when Steven Spielberg cast her as the star of his West Side Story that's due to release later this year. No doubt she will be even more well-known following that film's debut and ahead of Shazam! Fury of the God's June 2023 release.

In addition, if Zegler is playing the third sister, this DC role allows the actress the chance to play a villainous role alongside established actresses like Helen Mirren and Lucy Liu.