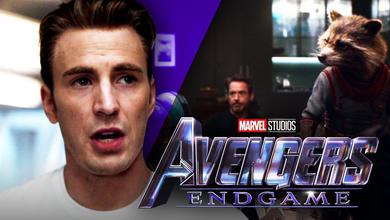 Despite it being over a year since the release of Avengers: Endgame, the film has continued to have a great deal of influence on the future of the MCU. With the report that Jonathan Majors' Kang the Conqueror will be joining the franchise in the next Ant-Man, there is a possibility that this may have been caused by the Avengers' use of time travel.

News has also continued to come out about the film, including how Black Widow will provide "resolution" following Natasha Romanoff's death in the film. New merchandise has continued to release for the film as well, the most recent of which being a full-scale replica of Stormbreaker.

Concept designs were also released for Jeremy Renner's Ronin costume for Hawkeye, providing looks at different options for the character's outfit. Renner's stuntman was also featured in a new behind-the-scenes set video, practicing choreography for Hawkeye's return in the film.

Now, even more behind-the-scenes material has released, with new photos mirroring a fan-favorite scene from a previous Avengers film...

Found by @Tarantellajuly on Weibo and shared by @CEvansNews on Twitter, new behind-the-scenes images from Avengers: Endgame have surfaced.

The images show some of the cast of the film, including Robert Downey Jr., Chris Evans, Scarlett Johansson, Don Cheadle, Jeremy Renner and Chris Hemsworth. The blue hand of Karen Gillan's Nebula can also be seen, as well as the back of the head of either Mark Ruffalo or Paul Rudd.

One image appears to be from the quick dinner scene when Rocket belittles Scott Lang while the rest of the team eats Chinese food. The second image shows Tony Stark at a desk speaking to the other Avengers.

📸 NEW/OLD behind the scenes from Avengers: Endgame (via https://t.co/5KsYMukmp1) pic.twitter.com/JivpfpFWF5

The images in-question seem to come from the first third of the film, where the Avengers strategize a means to retrieve the Infinity Stones from different points in time. The images possess much different lighting compared to anything seen in that segment of the film, though.

A similar scene to the first image does appear in the film, where Rocket Raccoon scrutinizes Scott Lang over dinner. The rest of the table is difficult to see, however, so this provides a look of what may have been a extended version of that scene that included more of the other Avengers. Tufts of fur may support that this image originates from that scene, possibly indicating the stand-in Rocket prop used on set. The image also mirroring the shawarma post-credits scene from The Avengers is undeniable, so it is a shame that this callback did not make it into the final film.

The second image seems from a completely new scene, showing Tony Stark explaining something to the Avengers. Given the presence of many different books cluttering the desk, it is likely that the team is discussing aspects of time travel together.

Ultimately, these are very interesting new photos to come out, and demonstrate that there are bound to be plenty more images and footage that Marvel Studios have still yet to release from the film.