Marvel Studios has had a rollercoaster of a relationship with Rotten Tomatoes over the last couple of years, especially with a dozen new projects having joined the Marvel Cinematic Universe in that time. While there has been the occasional dud with regard to ratings, most of the new shows and movies have come with plenty of praise, including the most recent outing in Ms. Marvel.

Before the series began its run on Disney+, Ms. Marvel garnered some great reviews from critics who saw the first two episodes, largely praising Iman Vellani's performance as Kamala Khan. The Direct also explained how the series' visual work and its ties to the Avengers' history within the MCU both help drive the narrative to new heights.

The big question now, with three episodes in the books - how does Ms. Marvel compare to its MCU predecessors with its Rotten Tomatoes rating? Well, not only has it apparently set a new standard in that regard, but it's even hit a high amongst all of its Disney+ companions from outside the Marvel world as well.

According to Rotten Tomatoes, Marvel Studios' Ms. Marvel has a higher rating than every other Disney+ series from Marvel Studios and Lucasfilm.

After 4 episodes, Ms. Marvel sits comfortably with a 96% rating on the site. This beats the 93% for both seasons of The Mandalorian and the 94% rating for What If...?. The only show that rates higher is Season 7 of Star Wars: The Clone Wars at 100%, although that one is technically a continuation of a show that didn't originally begin on Disney+, as The Clone Wars debuted on Cartoon Network. 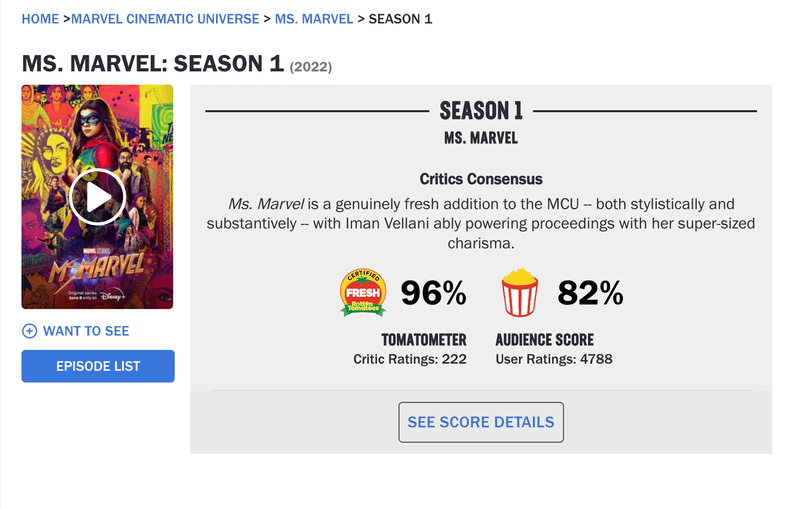 Additionally, Ms. Marvel rates higher than every major release outside of the MCU and Star Wars, which includes High School Musical: The Musical: The Series. The only shows that come in higher are Diary of a Future President and The Proud Family: Louder and Prouder, although neither of them has a critic consensus and only have eight and five total ratings, respectively:

This is particularly impressive considering that Ms. Marvel was subject to review-bombing after its first episode.

While there seemed to be no debate about how much fans enjoy Ms. Marvel thus far, it comes as a pleasant surprise to see that it's become such a hit amongst everything Disney+ has to offer from across the media spectrum.

The Mandalorian became an instant sensation after being part of Disney+'s grand launch in November 2019, with Season 2 hitting all the same marks as its predecessor. And that doesn't even include the first Disney+ offerings from Phase 4 of the MCU, which has a low mark of 83% with The Falcon and the Winter Soldier - everything else has hit at least 90% or higher.

Halfway through Ms. Marvel's first season, Iman Vellani and the rest of the cast and crew have delivered something that hits the right marks for countless viewers and critics. With plenty of mysteries still left to be uncovered, things should only ramp up from here in terms of excitement and viewership numbers, especially with Ms. Marvel now standing alone away from Obi-Wan Kenobi.

The first three episodes of Ms. Marvel are available to stream on Disney+.