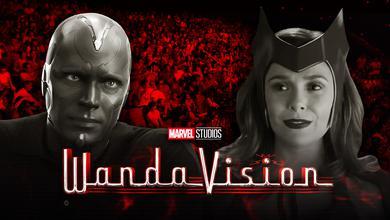 WandaVision is now set to be the first  project of the Marvel Cinematic Universe's Phase 4, though there is much contention as to whether the series will release before the end of the year.

Star Kat Dennings, who will reprise her role as Darcy Lewis, claims that Disney is still planning to release the show in 2020. Despite this, a Disney+ customer support line from Latin America stated that the series would arrive in 2021.

Even though the release date is uncertain, excitement is mounting due to the announcement of new information about the series. Entertainment Weekly is ramping up for their latest issue, which has a retro-inspired cover for their WandaVision feature. Some images have released, including new looks at Kathryn Hahn's character and what seems to be a pregnant Wanda Maximoff.

Now, a few more tidbits have been released from the upcoming issue...

It has been confirmed that the first episode of the series was partially filmed in front of a live studio audience, leading to participants having to sign "very, very strict NDAs:"

Last year, the notoriously secretive Marvel Studios did something unprecendented: It opened its set to visitors... So for [WandaVision's] premiere episode, Marvel's first Disney+ TV show went full midcentury sitcom, filming in classic black and white in front of a live studio audience (all of whom signed very, very strict NDAs).

The practice of bringing the public into the behind-the-scenes of a Marvel production is somewhat unprecedented, so it is interesting that the studio was willing to risk potential leaks to capture authenticity in its sitcom format. No major reputable leaks of WandaVision's premiere episode have been released, so it seems that the strict NDAs have done the trick.

The presence of a live studio audience should add to the incredibly unique approach that WandaVision is taking for its premise. The inclusion of audience response, such as laugh tracks and "awws," may add to and influence the plot of the series in some way. Perhaps it will force Wanda and Vision into situations by leading the storyline of the sitcom, or clue the characters in on what exactly is occurring.

As expected as well, the 1950s-inspired black and white episode will indeed be the first episode of the show. It can, therefore, be expected that the series will go forward through time, as WandaVision addresses sitcoms of different eras before arriving at the modern day. How this will be achieved remains to be seen, though perhaps the series' events has something to do with Wanda's reality-warping abilities or Kathryn Hahn's mysterious neighbour character.

Hopefully fans will be able to catch this premiere episode soon, if WandaVision does indeed meet its 2020 release window.