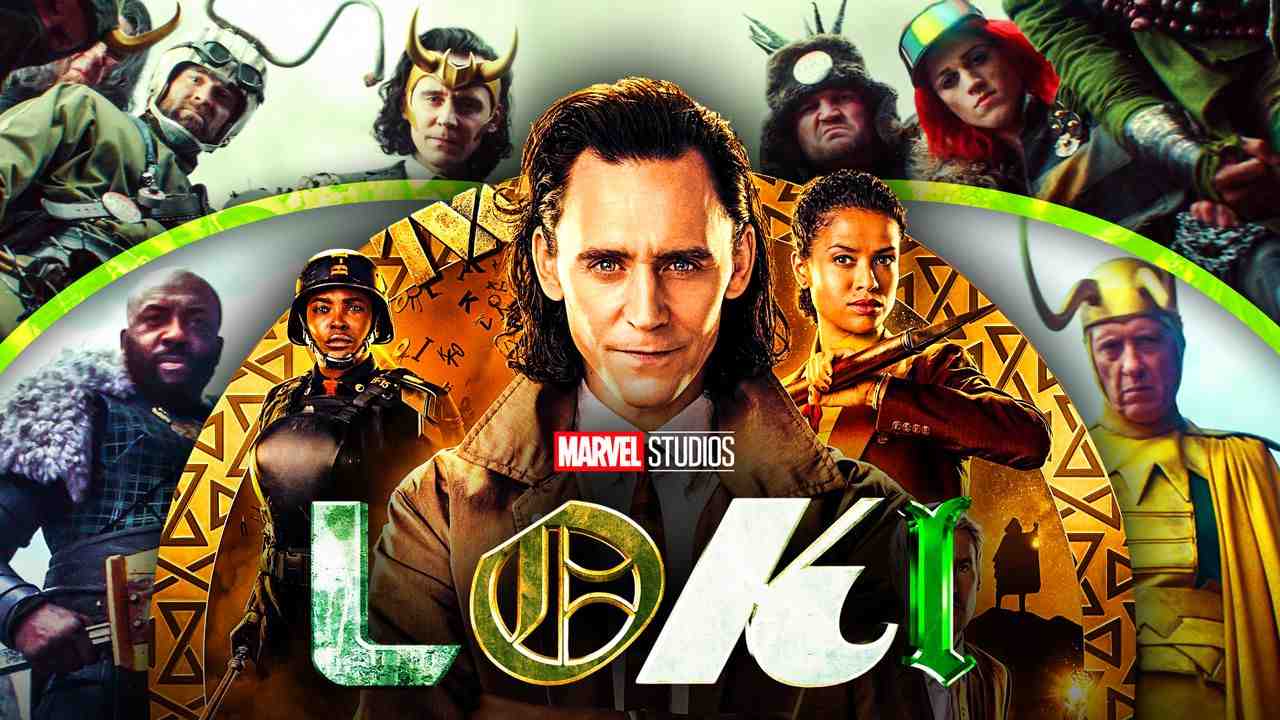 With both Black Widow and the penultimate episode of Loki dropping this week, 2021 has certainly been the gift that keeps on giving for Marvel fans.

The God of Mischief's time-traveling antics on Disney+ have proven popular among viewers across the first four episodes as the MCU has introduced brand-new concepts that will change the franchise forever. From cosmic apocalypses to a narcissistic romantic dynamic between two Lokis, Tom Hiddleston's debut solo outing has truly had it all.

After the sinister truth behind the TVA was finally revealed, Loki, Sylvie, Mobius, and Hunter B-15 began an uprising against the bureaucratic organization. Not only that, but fans were left on a dramatic cliffhanger as the God of Mischief was pruned, only to wake up surrounded by more Variants of himself.

After such a game-changing ending, expectations among fans for the penultimate episode have been high, but did it deliver everything they may have wanted?

Right off the bat, Loki 's fifth episode, “Journey Into Mystery,” is a lot of fun, especially for hardcore Marvel fans. As the God of Mischief ventures through The Void, a location that serves as the TVA's dumping ground, the episode is packed with Easter eggs from even the weirdest parts of comic lore.

With a reference to Kang the Conqueror, an appearance from the Thanos-Copter, and even the first Thor Variant, the frequent nods to Marvel Comics history will make re-watching this episode a delight for many.

The many unique Variants of Loki is certainly the crux of “Journey Into Mystery,” with the four versions introduced in last week's post-credits scene being the most significant.

As Tom Hiddleston's God of Mischief becomes acquainted with himself, Sylvie embarks on her own mission to learn the truth behind the TVA. After some brief interactions with Judge Renslayer, who is just as in the dark as Sylvie is, the Goddess of Mischief eventually deletes herself in order to reunite with her former companion.

Given the history between the pair , there was great potential for these scenes to really convey their hatred for each other; however, they're largely just used for exposition to explain The Void and to get Sylvie back to Loki.

Within The Void, the scenes between Tom Hiddleston and the many Variants of character were marvelous. While Classic, Kid, Boastful, and Alligator Loki may not have been given as much screen time as some had hoped, each was given a unique Nexus Event, or at least a hint towards one.

Every moment that Alligator Loki is on-screen ought to put a smile on viewers' faces, with the reptilian Asgardian being the source of much of the episode's stellar humor.

While the focus was kept on the central group of five and their attempt to survive in the terrifying world, others eventually surface, leading to a magical battle among the group. Seeing a room full of Loki's face-off in a full-scale brawl is something most would've never expected to see put to screen, but it's truly a sight to be seen.

It's also a great opportunity to see what makes the series' lead Loki so unique as Hiddleston's God of Mischief avoids the action altogether to escape.

After the recently-deleted Mobius saves Sophia Di Martino's Variant from the encroaching Alioth, the “shark” of The Void's “shark tank,” her eventual reunion with Hiddleston's hero led to some beautiful moments.

Once again, Loki continued to take further steps to form a romantic bond between the Variants, something some have criticized as odd, but others have continued to ship nonetheless. With no definitive relationship created within this episode, fans will have to wait until the finale to find out the end-point of this couple.

The wholesomeness continued as Loki and Mobius shared an emotional embrace before the TVA detective returned to the bureaucratic organization to bring the place down. Ultimately, this moment sadly felt like “goodbye” for the duo as whatever showdown the finale may bring approaches.

The ultimate goal of “Journey Into Mystery” was to escape The Void and find out who is behind the TVA, which seems to be what the Alioth is guarding. In order to get past this, the Lokis hatch a plan for Sylvie to enchant the cloud creature while the others cause a distraction.

As would be expected from the blockbuster machine that is Marvel Studios, the fight that follows is marvelous visually, dramatically, and instrumentally.

Much like WandaVision 's finale did for the Scarlet Witch, this week's episode allowed Loki to finally realize his true magical potential, something many fans have been craving for some time now. Marvel Studios has been criticized in the past for nerfing its most powerful characters, but they seem keen to rectify that mistake within Phase 4.

After coming out of the grand showdown victorious, “Journey into Mystery” left viewers on yet another huge cliffhanger as Loki and Sylvie walked through a portal out of the Void, towards whoever is truly behind the TVA. Sadly, this week's episode had no post-credits scene, so viewers will have to wait yet another week to find out if it was Kang all along as many have speculated.

Arguably the strongest point of Loki has been its stellar performances. The central bond between Loki and Sylvie was brought to life as gloriously as ever by Tom Hiddleston and Sophia Di Martino, whose chemistry continues to excel.

Despite being given less to do in this Loki-centric episode, the TVA's cast remains outstanding in everything they are given. The interaction in the cell between Gugu Mbatha-Raw's Renslayer and Wunmi Mosaku's Hunter B-15 is a clear stand-out moment of the episode due to the two's spine-tingling performances.

After a heart-breaking deletion in “The Nexus Event,” Owen Wilson's Mobius is as great as ever in the few scenes he appears in. If his embrace with Loki might've truly been goodbye, it was a worthy send-off to a perfect friendship.

One of the episode's surprise highlights comes in the performances given by Richard E. Grant (Classic Loki), Jack Veal (Kid Loki), and DeObia Oparei (Boastful Loki). All three actors embody the spirit of a Loki in a way that feels natural, while still receiving their own backstories and traits to keep their Variants unique.

Of the group, Grant is defiantly given the most expansive role within the story, and he plays it in a wonderful way. The British acting legend is essentially what Hiddleston's Loki would've grown into had he survived Thanos' attack, and he certainly does an excellent job of feeling like an older and wiser version of the same character.

After thirteen years of grand-scale high-budget productions from Marvel Studios, it's generally expected that everything they release will be visually outstanding. Once again, “Journey Into Mystery” continues this tradition by ticking all the boxes to create a cinematic feeling on television.

While some scenes are spent in the TVA, much of the story takes place in the barren wasteland of The Void. The desolate set-pieces of this world go a long way to create the feeling of fear needed within the episode as the Loki Variants fight for survival.

Additionally, the set and visual effects teams did a marvelous job of packing the episodes with Easter eggs in almost every shot, leaving hardcore Marvel fans plenty to hunt for, and many reasons to re-watch.

Following last week's episode that sent everything spiraling out of control, the cinematography department mirrored this perfectly with the fifth chapter's opening. As the camera spiraled from the TVA's timeline control room to the Time-Keeper's throne room, the sequence essentially summed up the entire story in just a few moments, making for a genius opening.

One outstanding element of Loki 's “Journey Into Mystery” comes from composer Natalie Holt, who has truly outdone herself with the episode's score. From the mystical tones of the opening sequence to the grand orchestral score of the Alioth encounter, every moment is mirrored beautifully in the soundtrack that accompanies it.

After such a powerfully tense fourth chapter, Loki set itself big shoes to fill with its penultimate installment, but ultimately delivered. “Journey Into Mystery” will satisfy hardcore comic readers and casual fans alike with a dive into the weirdest and most wonderful elements of Marvel Comics lore.

The fifth episode is definitely a Loki-centric story that fans of the character should adore. Additionally, this is the first time that the God of Mischief has been offered the chance to showcase his true power, making for some grand visual spectacles and dramatic moments that ought to keep the adrenaline pumping.

While the episode reaches a natural point to pause before the finale, the ending makes for a torturous cliffhanger that will keep viewers speculating for the next seven days.

The first five episodes of Loki are streaming now, exclusively on Disney+.