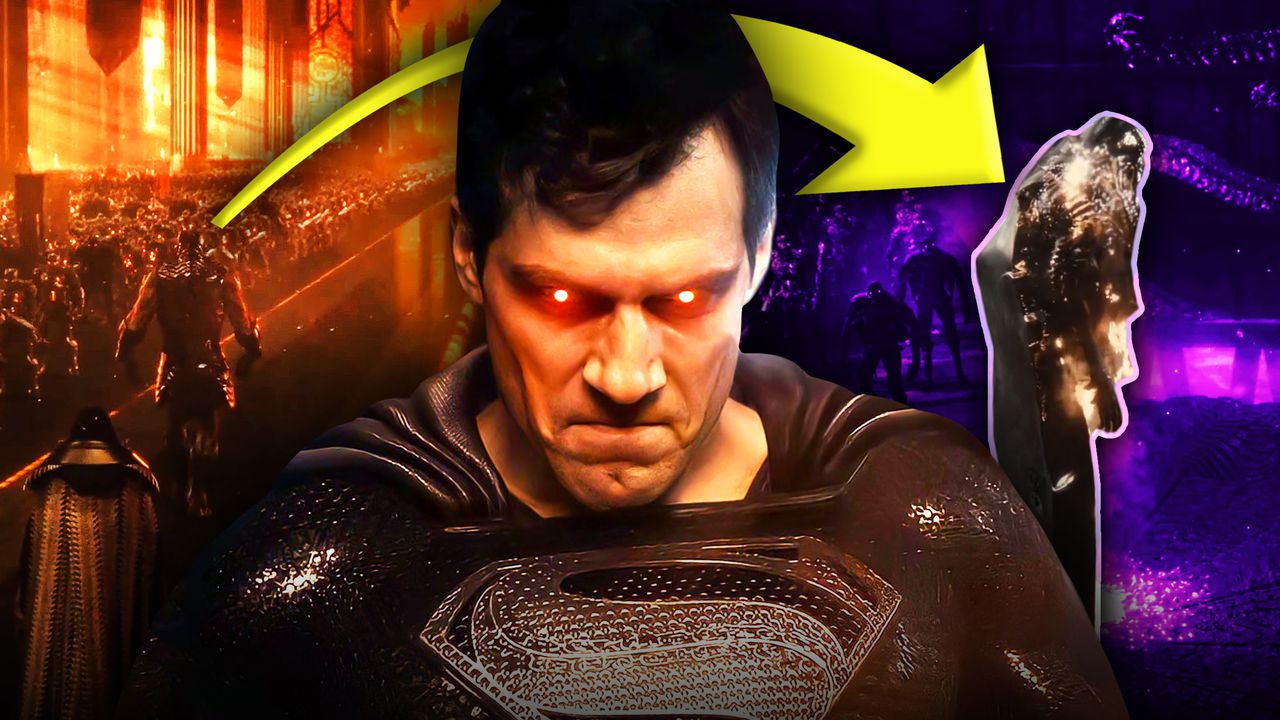 The hype surrounding Zack Snyder's Justice League is already at an all-time high, especially after the numerous teases from Snyder in the past months. The visionary director has been a huge part of the film's marketing, mainly sharing captivating behind-the-scenes stories as well as never-before-seen character moments that will be featured in his version of the film. From additional characters to different story beats, Zack Snyder's Justice League will no doubt deliver a unique experience to fans everywhere.

The film will showcase a good amount of new and returning DCEU villains like Jared Leto's Joker, Darkseid, and Granny Goodness. The exact role of this intriguing batch of characters in the overall narrative is one of the main topics of discussion amongst fans, but it looks like part of the mystery has been solved with the arrival of its latest trailer.

After several mini-teasers and a plethora of hints, the trailer for Zack Snyder's Justice League has been officially released and delivered numerous mind-blowing reveals. That said, The Direct has broken down all the DCEU Easter eggs and real-world references that were scattered throughout the latest piece of footage.

A TRIBUTE TO SUPERMAN'S DEATH IN DAWN OF JUSTICE

The trailer begins with a key moment from Batman v Superman: Dawn of Justice, the death of Clark Kent. The DC hero's scream has been given emphasis in the shot, potentially sending a message to any lurking threat that the Earth's most powerful being has fallen.

Interestingly, Snyder already confirmed that this will serve as the opening sequence of his Justice League, admitting that “it's part of the way the credits are rendered.” In a way, this scene is fitting since it provides a reminder that this is the director's version of the DCEU.

Jesse Eisenberg's Lex Luthor briefly returns in this latest trailer. Snyder previously shared that the Superman villain will be featured in the film's opening moments, and it looks like his role will serve as a lead-in to the threat of Apokolips. Still, it remains to be seen if Lex will be featured as a surprise cameo in the latter parts of the film.

It was already established then that Themyscira will be featured in the Snyder Cut, mainly due to the fact that the island plays host to one of the Mother Boxes. In the theatrical cut, Steppenwolf stormed inside the secret vault where the Mother Box is hidden, and the villain was successful in his mission.

Now, Themyscira will suffer the same fate in Zack Snyder's Justice League, but with even more drastic results as evidenced by the collapse of the settlement where the Mother Box was hidden. Before this shot, Queen Hippolyta was also shown observing the rubble as it falls down into the ocean, presumably hinting that she will not be part of the battle to protect the Mother Box against Steppenwolf.

Given that the Knightmare sequence is one of the most intriguing moments from Dawn of Justice, it's exciting to finally see its return in this version of Justice League. It's appropriate that the first shot from the mysterious timeline is Ben Affleck's Batman, serving as a nod to Knightmare's introduction in the 2016 film. It seems that the Dark Knight is scouting the fleet that was (potentially) sent by Darkseid to Earth.

In what appears to be an extended shot of the very first teaser for the Snyder Cut, Gal Gadot's Diana Prince uncovers the truth behind Darkseid and Apokolips from a secret shine beneath an unidentified ruin.

The scared facial expression of the Amazonian upon discovering this threat was showcased once again, seemingly hinting that the Lord of Apokolips will not be an easy opponent, thus paving the way for the Justice League's creation in the film.

The first full look at Apokolips is shown in all its glory in this trailer, featuring Darkseid, Granny Goodness, and Desaad walking down the aisle while a horde of parademons pay their respect. This scene could primarily establish the threat of Darkseid from the get-go, and the villain could be seen sending Steppenwolf to Earth to investigate if a certain Kryptonian is really dead.

This scene was cleverly placed right after Darkseid's brief introduction in the previous shot showing Apokolips. By looking closely, it's safe to say that this sequence is set at the beginning of the third act, where (spoiler alert) Steppenwolf successfully retrieved all the Mother Boxes.

This sequence provides a clean look at the much-improved design of Steppenwolf that was heavily teased by Snyder in the past months. This version of the villain is more menacing from the theatrical cut, with him taking down the Amazons with ease.

In this shot, Ben Affleck's Bruce Wayne is shown recruiting Jason Momoa's Arthur Curry for his team of super-powered pals. A key takeaway from this moment is the more serious tone that was infused in the scene, which is a clear departure from the comedic vibe that was featured in the theatrical cut back in 2017.

After this, multiple glimpses at the members of the team are showcased, ranging from Wonder Woman all the way to Ezra Miller's Flash.

It is hard to confirm if this is the first look at the Knightmare timeline's Cyborg, but the background appears to hint that this is the case. It's interesting to note that Victor still resembles his look from the main timeline in this shot, but it's safe to say that this is a red herring from Snyder to ultimately hide the actual design of the character in this apocalyptic setting.

If this is the case, then it will be exciting to find out how the character evolved in this dark timeline.

Batman appears to struggle in this fight against some parademons while inside the Batmobile. Aside from the noticeable omission of the red skies from the theatrical cut, it looks like the chase sequence will turn out differently.

In the 2017 film, Batman's goal is to distract the parademons to let the other heroes reach Steppenwolf. As for Snyder's version, it will be interesting to find out the end goal of Bruce Wayne this time around.

Kevin Costner's Jonathan Kent shows up as a brief cameo, but not in a way everyone expected. Before Superman's resurrection, a picture of Jonathan was dropped from the conducive amniotic fluid of the Kryptonian Scout Ship from Dawn Of Justice.

In a way, the inclusion of the picture makes narrative sense since Martha placed it alongside Clark during his funeral. This is another example of the strong connections between Justice League and the 2016 blockbuster.

Ray Fisher's Victor Stone can be seen harnessing the power of the Mother Box in this brief shot from the latest trailer. Based on what's been revealed about the cut so far, it looks like this will happen during the moment where Cyborg connects with the Mother Boxes.

Snyder previously teased the power levels of Cyborg in the film, admitting that “what he's able to do is really just the tip of the iceberg compared to what is possible for the future of him.” This scene could be our first glimpse of the insane abilities of the character, and it could very well lead the team to victory.

Kiersey Clemons' Iris West was unceremoniously scrapped from the theatrical cut of Justice League, but the actress returns in exciting fashion in the Snyder Cut. In this scene, it shows Ezra Miller's Barry Allen saving Iris from a car crash, and this could be the first hint of the pair's romance coming into fruition in the film.

The aftermath of Superman's resurrection in the Snyder Cut is unknown, but it seems that the plot point where Lois and Clark regroup in Kent Farm will still be included. This sequence could serve as Lois's way of showing Clark his Smallville roots, eventually reuniting with Martha to cement his suppressed memories.

Ultimately, this could lead to Superman's discovery of the Black Suit in the Fortress of Solitude that will kick the events of the third act in motion.

In captivating fashion, Snyder recreates the iconic first flight sequence from Man of Steel and incorporates it into the character's return in Justice League. Admittedly, this is a fitting tribute to one of the DCEU's iconic scenes while also putting its own spin by integrating the Black Suit from the comics.

THE FLASH TRAVELS BACK IN TIME

Snyder previously teased that time-travel will be involved in his version of Justice League, and this could be our first glimpse. In the shot above, it shows Barry trying to help Victor from being absorbed into the Mother Boxes. At a later point in the trailer, another shot that features Barry entering the Speed Force was also shown.

The reason behind this is unclear, but it could very well hint that Cyborg is the key to defeating Steppenwolf and his forces in the film.

In a blink-and-you'll-miss-it moment, Steppenwolf grabs the Mother Box from Atlantis, presumably after defeating the combined might of Aquaman, Mera, and the rest of the Atlanteans. It's worth pointing out that the way the villain retrieves the relic is not similar to the theatrical cut, potentially hinting that the battle under the sea will play out differently.

It's all but confirmed that a different iteration of the history lesson sequence will be featured in Zack Snyder's Justice League, and the shot above is a prime example of that. Given the four-hour runtime of the film, it seems that an extended look at Darkseid's first invasion on Earth will be showcased.

This provides an opportunity to show more context to how the Amazons, Atlanteans, humans, and even Green Lanterns unite against the forces of Apokolips.

The trailer's money shot is the first-ever confrontation between Ben Affleck's Batman and Jared Leto's Joker. The meeting between the two DCEU characters has been one of the most anticipated interactions in the franchise, and Snyder will look to deliver it in a compelling manner. It remains to be seen if the two will become allies in the Knightmare timeline, and it will be exciting to see how the dynamic between the pair will evolve in this dream scenario.

Joker's “we live in a society” line is a clear reference to the meme that has been closely tied to the character in recent years, and it's fitting that the villain gets to say it in his surprise DCEU return. Knowing full well that this will stir up conversation on social media, Snyder's clever addition of this Easter egg might solely be for fan service, but it's also possible that it was included to propel Leto's version of the character to greater heights.

Overall, it's evident that Zack Snyder's Justice League will be packed with DCEU lore and callbacks, reminding everyone of the director's true vision for the franchise. It's unknown if the Snyderverse will continue after the film's HBO Max debut, but it's safe to say that this version will deliver a one-of-a-kind experience for any DC fan that will be watching.