Marvel Studios is halfway through the first season of its final 2021 Disney+ series, Hawkeye, which is giving Jeremy Renner the chance to shine in his first solo project for the MCU. Although the primary focus is rightfully on Renner's Clint Barton and Hailee Steinfeld's Kate Bishop, the series is setting up some potentially thrilling teases for the back half of Season 1.

The most recent TV teaser gave fans a possible first look at Florence Pugh's Yelena Belova, which will finally give her anti-hero the opportunity to track down Barton after thinking he murdered Natasha Romanoff in the Black Widow post-credits scene. And, of course, there's that ever-popular theory regarding Vincent D'Onofrio's Kingpin, with fans believing that he's Maya Lopez's mysterious uncle from Episode 3.

With fans all over the world enthralled by what's happening in Hawkeye, there's the natural question of who within Marvel's ranks is keeping up with the Disney+ action. Thanks to a recent interview, fans now know that one of those Marvel personnel is not Pepper Potts star Gwyneth Paltrow.

During an "ask me anything" segment in her Instagram story, Gwenyth Paltrow expressed confusion when questioned about the Disney+ series Hawkeye.

When a fan asked her if she'd watched the show yet, she admitted to not even knowing anything about the series at all:

Fan: Have you watched the Hawkeye series??

Paltrow: No, what is that? 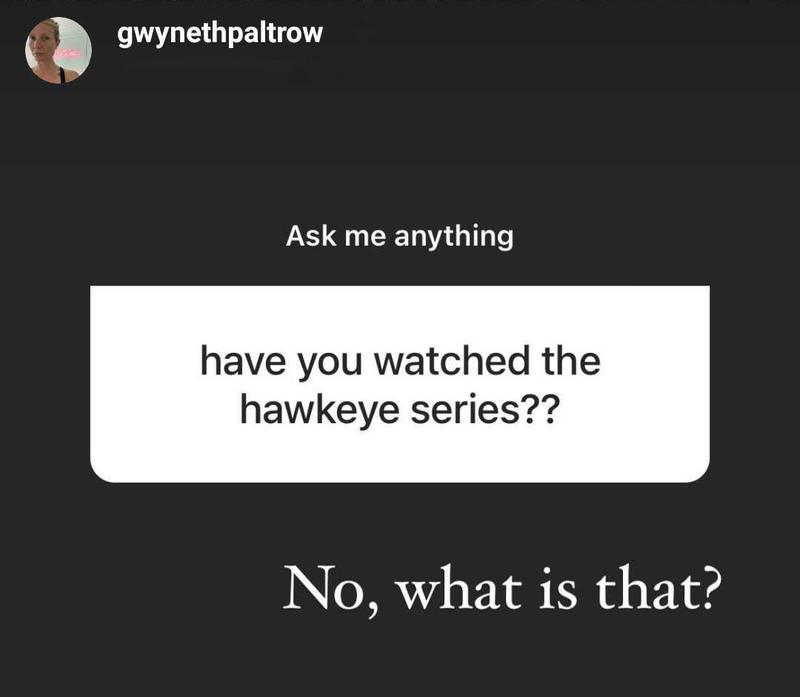 On the one hand, Gwenyth Paltrow is one of the founding members of the MCU from an acting perspective. However, she's also made somewhat of a habit out of being unclear on what's actually happening in the widely-popular franchise she helped build from the ground up.

This is far from the first time fans have seen Paltrow seemingly go blank on the MCU's history, as she notably forgot that she, Jon Favreau, and Robert Downey Jr. filmed one of the last scenes in Spider-Man: Homecoming. She also has a notorious habit of forgetting who she's acted within and out of the MCU, and it doesn't just stop at Marvel Studios projects.

Paltrow is clearly an important part of the Infinity Saga, having played secretary-turned-Stark Industries CEO Pepper Potts in seven MCU movies to date. However, her lapse in memory regarding her MCU tenure hasn't gone unnoticed, and it's continuing in a big way as Phase 4 moves forward.

The first three episodes of Hawkeye are now streaming on Disney+. Episode 4 will make its debut on Wednesday, December 8.