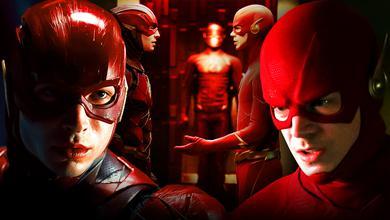 Ezra Miller's The Flash is now filming and is set to release on November 4, 2022. Andy Muschietti is directing, and Michael Keaton's Batman is set to return to the role for the first time in 30 years.

Sasha Calle is set to play Kara Zor-El aka Supergirl as well in this multiversal adventure. Kiersey Clemons is also returning to her role of Iris West from Zack Snyder's Justice League.

Recently, set photos have shown Ezra Miller with a new, longer hairstyle. It is different from the short hair seen in other set photos, pointing to a new look at the character.

It turns out this longer hairstyle isn't just before a trip to the barbershop but an example of how they will break into the multiverse.

TWO BARRY ALLENS IN THE FLASH

New set photos via @Jos3chss on Twitter show Ezra Miller speaking with a body double, hinting at Barry Allen interacting with an alternate version of himself in The Flash. In theory, this alternate Barry Allen could be from the universe of Michael Keaton's Bruce Wayne.

The photos can be seen below:

THE DCEU MULTIVERSAL TAKE OVER

As the Marvel Cinematic multiverse is set to be in full swing during Doctor Strange in the Multiverse of Madness, DC will be expanding into its own multiverse in 2022.

A commonly used term, "Variant," from the Loki series seems to be the direction the Scarlet Speedster solo flick is going with The Flash. Barry Allen will interact with other Variants, including possibly Grant Gustin's Barry Allen.

Even two Bruce Wayne's are set to appear in the movie. Who is the variant, Michael Keaton or Ben Affleck? The fans can figure that out.

Regardless, seeing alternate versions of these characters will be interesting. Is this long-haired Barry Allen the Flash or just a forensic scientist? Could audiences see multiple variations of Barry Allen? Only time will tell, but many are curious to see what the plot of this epic cross-over is.

The Flash will be released in theaters on November 4, 2022.