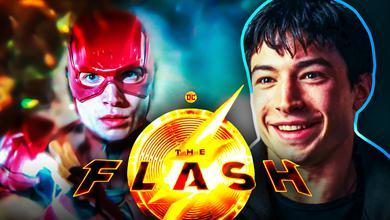 One of the most anticipated DCU films currently in the works is the long-awaited solo film for Barry Allen's The Flash.

Set to release November 2022, The Flash, starring Ezra Miller, centers around a multiversal plot that includes both Michael Keaton and Ben Affleck's versions of the Caped Crusader, Tim Burton's version of Gotham, and possibly even Grant Gustin's version of the Scarlet Speedster.

The Flash has been filming in the United Kingdom, which is also where a new Ezra Miller's photo with a fan has led to speculation that his character may look a little different come 2022.

In an Instagram photo posted by @izztb, Ezra Miller was seen in Brighton, England with considerably longer locks than when audiences last saw his character in Zack Snyder's Justice League.

The Flash is currently filming in London, about an hour and a half away driving distance from Brighton.

This look is certainly different from Barry Allen's standard short haircut, begging whether the actor's new do is a personal choice or meant to serve a purpose in the film. While fans don't yet know if the actor's long hair is intended to serve the film's story, Miller won't be the only member of the cast with a new hairdo.

In addition to various Batmen and Scarlet Speedsters, the cast also includes Supergirl, played by Sasha Calle, who has already shared images of her significantly shorter haircut that was likely in preparation for the film.

However, it may not matter what Miller's hair looks like considering it will likely be covered by his signature costume or digitally altered for when he moves through Flashtime.

Due to Flashtime, Zack Snyder actually digitally altered the hair of Barry Allen's love interest Iris during the scene where they meet in Zack Snyder's Justice League, and the same could be the case here. Regardless, whether Ezra Miller's hair is for the purpose of film or not is something fans are sure to discover as that 2022 release date approaches.