Falcon and Winter Soldier Finale: 10 Bold Predictions For How the Season Ends 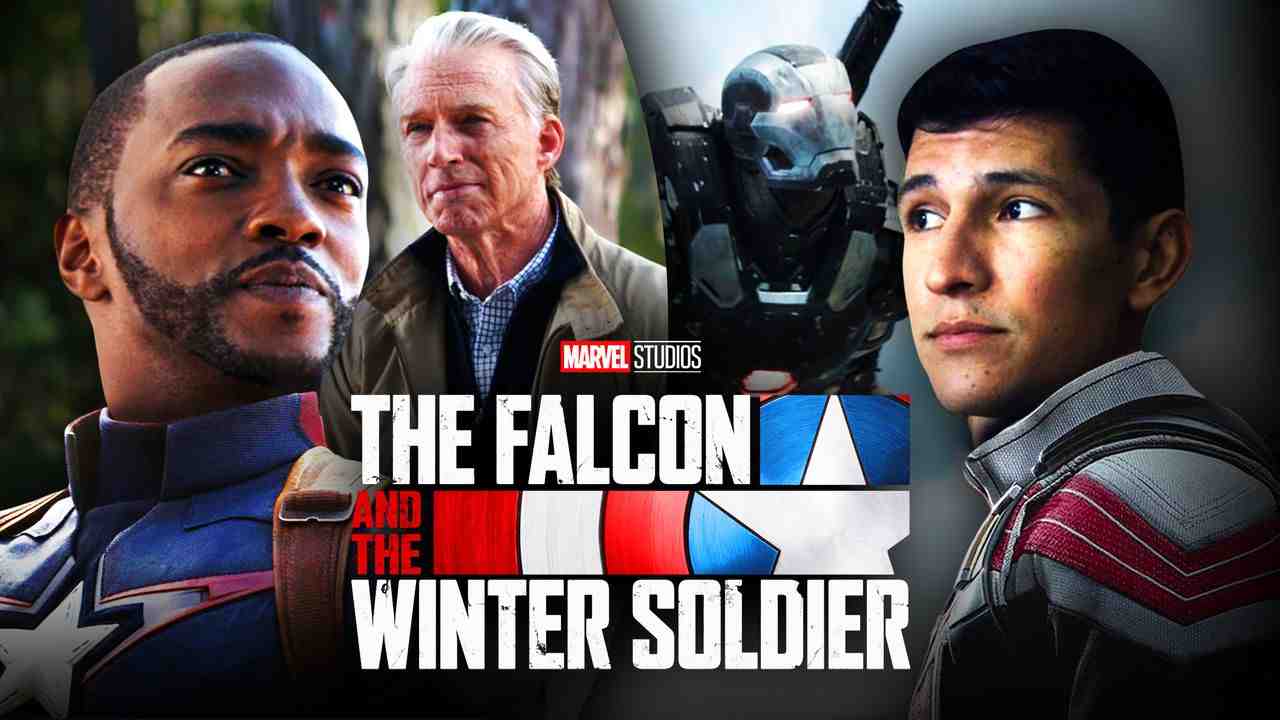 This week, The Falcon and the Winter Soldier will premiere its long-awaited finale on Disney+. Following five weeks of all-out action and viral memes, the series will finally come to an end as Sam Wilson takes up the Captain America mantle to take down John Walker and the Flag Smashers.

The climactic finale has plenty more to do to close out the MCU's latest adventure fittingly as the Power Broker still lurks in the shadows of Madripoor, and Julia Louis-Dreyfus' mysterious character arrives in Walker's life. The exact length of the episode is yet to be revealed, but with so many unresolved threads left to close, fans should prepare themselves for what could be the series' longest episode yet.

Ahead, The Direct takes a look at ten bold predictions for everything that may happen in the season finale of The Falcon and the Winter Soldier .

After Steve Rogers handed Sam Wilson his iconic vibranium shield in the concluding moments of Avengers: Endgame , many fans assumed that the Falcon's transition into the MCU's next Captain America would be much quicker than it has been.

Wilson's Disney+ outing has certainly taken its time in preparing him to become the star-spangled hero, but it seems that the time has finally come as the series draws to a close. After reclaiming the shield from John Walker in the last episode, and receiving a new suit courtesy of the Wakandans, Sam seems to be ready to don the red, white, and blue for good.

Last week's episode ended with the former Falcon opening a Wakandan briefcase, which likely contains the new suit that he will wear as Captain America to save New York in the finale. Sam's patriotic suit in the comics has usually been quite a departure from Steve's look while holding a similar overall style. A better question lies in whether his suit will include the wings he has grown so used to, as his comic counterpart has often kept those in his tenure as Captain America.

As we already know, Sam's existing wings were broken in his fight with John Walker, however, the finale will likely reveal a new set of Wakandan wings to go with his Captain America attire.

TORRES SUITS UP AS THE FALCON

As Sam Wilson prepares to become the MCU's next Captain America, he leaves his time as the Falcon behind him. Up until recently, most fans had assumed that the heroic wing suit would be retired as he takes up the shield, however, it seems Marvel is setting up Wilson's replacement in the role.

In Marvel Comics, Air Force lieutenant Joaquin Torres is traditionally the character to become Falcon after Wilson dons the stars and stripes. The series' latest episode left fans with a teaser towards this shift as Sam handed his wings off to Torres telling him to “keep 'em.” During the titular duo's fight with John Walker, the super-soldier infused anti-hero managed to snap the wings directly off Sam's back, meaning they may need some fixing before they're ready for use.

As New York comes under attack from the Flag Smashers, Sam and Bucky are sure to need all the help they can get in stopping Karli Morgenthau's group, so it's likely Torres will be involved in the action in some way.

If Torres doesn't put on the Falcon suit during the episode itself, it would make for a fitting post-credits scene, given he will probably be appearing as the Falcon in a future season or another Marvel project down the line .

Following his appearances in the Iron Man and Avengers franchises, Don Cheadle returned as Colonel James Rhodes in the debut episode of The Falcon and the Winter Soldier. Unfortunately, Rhodey didn't suit up as War Machine in the episode and was there more for a quick heart-to-heart conversation with Sam, but he could still return for the climactic episode.

The series' writer Malcolm Spellman recently played coy on Cheadle potentially popping up again in future episodes , simply saying he “cannot talk” about that. While this is far from any kind of confirmation, his refusal to answer leaves some hope that War Machine could be involved in the New York action of the final episode.

Rhodes will return to the Marvel universe next year in his own series, Armor Wars , a story revolving around Tony Stark's technology falling into the wrong hands . Sam and Bucky's solo outing has been confirmed to tie into “at least three” future MCU properties, and given Rhodey's established role in the series, it would make sense if Armor Wars is one of them.

Much like Iron Man's former sidekick, Joaquin Torres is a high-ranking officer in the US air force, meaning the two may have already met prior to the series. It's recently been reported that Marvel is very impressed with Danny Ramirez's performance as Torres, so Armor Wars could be an interesting place to continue his story next as he becomes the Falcon.

Marvel has recently been setting up the introduction of multiple teams to the universe, including the Young Avengers, New Avengers, and most recently, the Thunderbolts. Comic fans will recognize the name as Marvel's take on the Suicide Squad, a team of villains who unite under the control of the government to do some good.

So far the MCU has already introduced the Winter Soldier, Baron Zemo, Batroc, Abomination, Taskmaster, and Ghost, all of whom have served as members of the team in the past. The team is typically assembled by Thunderbolt Ross, meaning it's possible the MCU's long-standing political-military figure could return in the finale to assemble his team.

The Falcon and the Winter Soldier has made a point of dodging the question of Steve Rogers' current location. The former Avenger retired from the mantle of Captain America in Avengers: Endgame to return to the past and live out his life with Peggy Carter. However, in modern-day Steve is now an old man, and Peggy is long dead. So, where is he?

Throughout the series, Chris Evans' Steve has always been referred to in the past tense and described as “gone,” which would seem to suggest that wherever he is, he won't be coming back. Given he doesn't seem to be dead, a likely possibility is that he's still out there living his life in hiding, away from society to protect the secret of time travel.

If an older Captain America was seen to be walking around the world, people would certainly question his existence. From what has been shown of the post- Endgame world, the public doesn't seem to be aware that Tony Stark invented time travel, and it would be a logical secret to keep given its dangerous potential.

We think that Chris Evans' elder Cap will make a cameo appearance, one that will shed a surprising light on his whereabouts in the months after The Blip.

Throughout the duration of the series, many of the fans' biggest questions have surrounded the elusive identity of Madripoor's crime boss, the Power Broker. Unless this mysterious character is a seed being planted for the future, then it's likely this reveal will come in Friday's episode.

Based on the evidence shown so far, the most common theory surrounding the Power Broker is that Sharon Carter is the one pulling the strings . It's clear that Peggy Carter's niece has changed greatly since she last popped up in Captain America: Civil War , but the finale will likely explain the effect the blip and her fugitive status had on her life.

Granted, Sharon isn't the only possible Power Broker, but it seems to be the most realistic option as of now. Between this identity reveal, Sam becoming Captain America, and the many villains left to take down, the week's finale is set to be an action-packed extravaganza.

One of the most dramatic moments of the whole series came in the fourth episode as John Walker brutally murdered a Flag-Smasher out of revenge for the death of Lamar Hoskins.

Reversing the roles by putting Sam in a similar position with Karli or John Walker and deciding to show mercy would be a fitting way to show why he is the better choice to become Captain America.

Sam Wilson has a clear path in the MCU following the conclusion of his Disney+ series as he succeeds Steve Rogers in the mantle of Captain America. However, Bucky Barnes doesn't seem to have an obvious arc ahead of him with his days of being the Winter Soldier behind him.

One option would be to have him return to Wakanda as the White Wolf , potentially setting up an appearance in Black Panther 2 . Alternatively, Bucky would make for a great leader of the Thunderbolts, a team he has frequently been a member of in the past. Or, he could simply continue to team up with Sam in further buddy-cop adventures.

With the Wakandan Dora Milaje having appeared in a minor role to recapture Baron Zemo throughout The Falcon and the Winter Soldier , a post-credits scene could very well set the stage for next year's sequel.

As of now, virtually nothing is known about the film, except that it will focus on the side characters of the first film following the tragic passing of Chadwick Boseman. A cryptic scene in the upcoming finale would be an excellent way to tease the plot of the film or to tease the fate of Boseman's T'Challa.

A WandaVision post-credits scene began to set up the Samuel L. Jackson-led Secret Invasion series that will see the super-spy dealing with Skrulls infiltrating human society. While the reality-bending series teased Monica Rambeau heading to space for the story , it's possible The Falcon and the Winter Soldier could reveal one of our characters as a disguised Skrull.

Fans recently spotted a shape-shifting alien hidden in plain sight in the Loki trailer , so if one did pop up in this week's finale, that would be three Marvel projects in a row to feature the alien beings. Secret Invasion is one of the biggest crossover arcs in Marvel Comics, so doing the story justice would require plenty of teasing before it begins next year.

An obvious choice to be revealed as a Skrull would be a character like Sharon Carter, who has seen a drastic character shift since her last appearance, potentially down to an alien replacement. If the comic book story is anything to go off of, it will be nearly impossible to predict who the hidden Skrulls will be within the MCU , but it's possible they may begin to be revealed over the year before the series debuts.

The Falcon and the Winter Soldier will release its climactic finale episode this Friday , exclusively on Disney+.