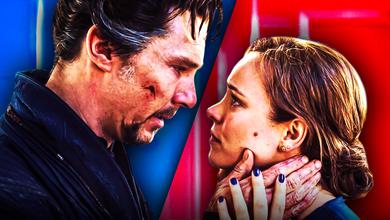 Marvel Studios is set to use Phase 4 of the MCU to expand heavily on the magical and mystical side of the expansive franchise, which returns with Loki on Disney+. Possibly the height of this magical madness will come in March 2022 when Doctor Strange in the Multiverse of Madness hits theaters, truly bringing the MCU multiverse into the spotlight.

While the sequel is set to bring in Elizabeth Olsen to co-star as the Scarlet Witch and introduce new players like Xochitl Gomez's America Chavez, important players from 2016's Doctor Strange will make a comeback as well. This includes Benedict Wong's Wong and Chiwetel Ejiofor's Baron Mordo on the superhero/villain side while Rachel McAdam's Christine Palmer makes a semi-surprising return as well.

Christine has not been seen or mentioned in the MCU timeline since her first appearance, leaving fans to wonder where her relationship stands with the Sorcerer Supreme. In a recent social media posting, one of the writers on Doctor Strange teased that answer.

While the movie never specifically addressed what happened between the two leads, Cargill imagined that they "went their own ways" and remember each other as "the one that got away" after the events of the film:

"They went their own ways and became the one that got away to each of them."

Cargill was also asked about his overall perception of Doctor Strange's character and how it aligns with Steve Ditko's representation of Strange in the comics. Cargill specifically noted Strange's "constant alienation" as a driver for the sorcerer's actions:

I also think it's important to zero in on his constant alienation. He spends so much time around powerful beings that earthly things fall by the wayside and he must constantly be snapped back into reality and reminded that small things matter equally.

MORE OF THIS MCU RELATIONSHIP COMING?

Christine Palmer and Stephen Strange had a roller-coaster of a relationship in 2016's Doctor Strange, particularly while Strange was trying to turn his life around after his devastating car accident. In the end, Palmer helped send her former colleague on his way the best she could before Strange took down Kaecillius and Dormammu in the Dark Dimension.

Benedict Cumberbatch's hero has since made two more appearances in the MCU, with a third coming in Spider-Man: No Way Home before next year's solo sequel. McAdams was officially included in the cast of that sequel at Disney Investor Day, although her role is a mystery with so much grand-scale action set to make its way to the big screen.

With Strange now having fully embraced his path to becoming the Sorcerer Supreme, it will be interesting to find out how Christine will fit in alongside so many super-powered cohorts. At the very least, she'll have an idea of what to expect before the very fabric of reality possibly falls apart around her.

Doctor Strange in the Multiverse of Madness will debut in theaters on March 25, 2022.