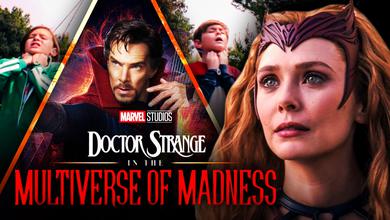 It was recently confirmed that Doctor Strange did indeed have a planned cameo appearance in WandaVision, but it was cut and never filmed. It would have seen both the Sorcerer Supreme and the Scarlet Witch "riding off into the sunset together."

Marvel Studios President Kevin Feige also addressed whether this cut cameo would affect the Doctor Strange sequel, which involved "very dedicated coordination" between writers. In a recent interview, Doctor Strange in the Multiverse of Madness co-writer Michael Waldron addressed how the film will follow up on the ending of WandaVision and the story of Elizabeth Olsen's Wanda Maximoff.

In an enormous interview with Vanity Fair, writer Michael Waldron disclosed that his plans for the Doctor Strange sequel didn't change, despite the titular character's planned appearance in WandaVision not happening.

Waldron spoke about his friendship with WandaVision head writer Jac Schaeffer, which developed during his time working on Loki, saying that he "admired her so much.”

WandaVision will directly lead into Doctor Strange in the Multiverse of Madness, which Waldron is making sure doesn't "let (his) friend down." Waldron shared her excitement for Elizabeth Olsen's Scarlet Witch, stating that "getting to continue Wanda's story was amazing."

“When I got brought on to Doctor Strange — especially because Wanda is part of that story — I just wanted to make sure I wasn't gonna let my friend down...I can't shit the bed because she did such a great job. So we had a lot of conversations. Getting to continue Wanda's story was amazing.”

NOT SCREWING UP WANDAVISION'S FOLLOW-UP

The ending of WandaVision was actually one of the more glaring criticisms of the show from some fans, who believed that it was too forgiving of Elizabeth Olsen's Scarlet Witch. However, Kevin Feige has assured fans that they intended for them to "understand that what [Wanda] did was terrible."

Implied even more when viewers saw her reading the Darkhold, which, at least in the comics, is an ancient tome of unspeakable evil that corrupts whoever reads it. Fans have long speculated that Wanda will be the cause of the "madness" in the Doctor Strange sequel, so it'll be curious how this happens, despite the original ending for WandaVision having the two not literally "riding off into the sunset together," but leaving peacefully together.

Doctor Strange in the Multiverse of Madness is currently scheduled to be released in theaters on March 25, 2022.