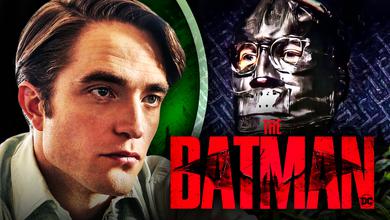 The Batman is arguably one of the most anticipated DC movies yet, thrusting the Dark Knight back into his own solo film series.

The upcoming Batman flick is still far off from its March 4, 2022 release date, but new information and leaks have provided fans with plenty of new details to tide them over in the meantime. The film will not be the only project set in this new Matt Reeves-created universe, as a James Gordon-focused GCPD spinoff series will also be produced for HBO Max.

Paul Dano's The Riddler will act as the primary villain of the film, potentially being joined by a gang of hoodlums to do his bidding. A tease at the Riddler's appearance outfit was shown off on a promotional calendar, which also featured a new look at Robert Pattinson's Batman.

Now an even better look at Dano's character has been revealed...

PAUL DANO SUITS UP AS THE RIDDLER

Shared by Reddit user u/donbosco2017, a new promotional image of Paul Dano's The Riddler from The Batman has been uncovered.

The photo shows Edward Nashton's head wrapped up in duct tape, creating an unsettling makeshift mask to put his glasses over. The character's trademark green is incorporated into what appears to be some sort of coat, but is cut off before the character's potential iconic question-mark symbol can be seen.

As many fans have already noted, this is a very big departure for the Riddler's character.

Typically, Edward Nashton, or Nygma, is often portrayed as an arrogant yet lighthearted character in other media, which is reflected in his vibrant costumes. Just by comparing Dano's appearance against the Riddler's previous live-action depiction from Jim Carrey displays the stark contrast in tone, with The Batman's Riddler ditching the green question mark-covered spandex for a more sinister look.

Paul Dano's interpretation of the character has been likened to the Zodiac Killer, indicating that The Batman will lean more into the deranged and psychotic side of the character. This costume very much reflects this, with the duct tape mask making it clear that this villain is as unhinged as they come. Let's just hope he doesn't do anything too rash when he realizes how painful it will be to take that mask back off.

Bruce Wayne will come face-to-face with this odd-looking Riddler when The Batman releases on March 4, 2022.