DC's Batgirl spent months in production in Glasgow, with the Scottish city doubling as Gotham for the third time in just a few short years. The HBO Max shoot brought a heavy impact on the city during filming, as local businesses were reportedly hurt by Batgirl closing streets and disrupting normal life.

Unfortunately, all those struggles have proven to be for nothing as Warner Bros. Discovery recently decided to cancel the Batman spin-off. Several of the movie's stars have already spoken out against this, including one anonymous star who called WBD CEO David Zaslav an "imbecile" for the decision.

Actress Ivory Aquino - who was to play best friend Alysia Yeoh - also shared an open letter begging the studio to reconsider after the cast "poured [their] hearts" into making the film.

As stories continue to emerge from the production while WBD reportedly prepares to destroy the existing footage, another heartbreaking tale has emerged. 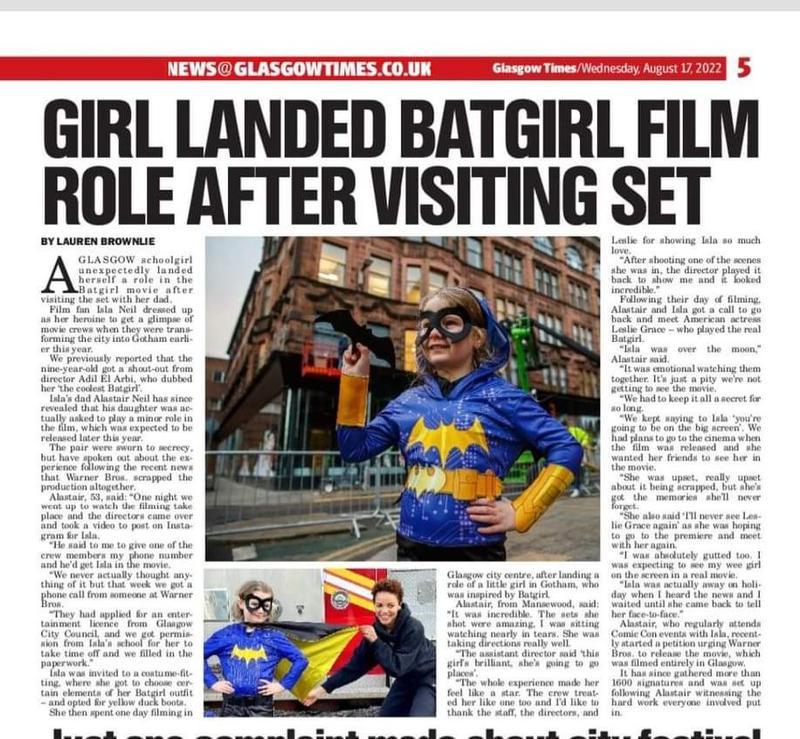 Glasgow father Alastair Neil has pleaded for Warner Bros. Discovery to release images to him of his daughter, Isla, in Batgirl after she landed a minor role in HBO Max's canceled DC flick.

Neil called for WBD CEO David Zaslav to release the photos "taken on [Isla's] day of filming" to him to show their family after the studio "promised" to deliver them:

"David Zaslav, @wbd @wbpictures if you are going ahead with scrapping Batgirl completely can I at least have some photos of my daughter Isla in her scenes to show her mum, sisters, etc, photos were taken on her day of filming and I was promised they would be released to me."

According to The Glasgow Times, the local schoolgirl dressed up in her own Batgirl outfit to visit before the directors, Billal Fallah and Adil El Arbi, "came over and took a video to post on Instagram" before offering her a role in the movie. Her father spoke about the experience:

"One night we went up to watch the filming take place and the directors came over and took a video to post on Instagram for Isla. He said to me to give one of the crew members my phone number and he’d get Isla in the movie. We never actually thought anything of it but that week we got a phone call from someone at Warner Bros. They had applied for an entertainment license from Glasgow City Council, and we got permission from Isla’s school for her to take time off and we filled in the paperwork."

Neil went on to discuss the high praise the crew gave his daughter on the set as the experience "made her feel like a star:"

"It was incredible. The sets she shot were amazing, I was sitting watching nearly in tears. She was taking directions really well. The assistant director said 'this girl’s brilliant, she’s going to go places. The whole experience made her feel like a star. The crew treated her like one too and I'd like to thank the staff, the directors, and Leslie for showing Isla so much love. After shooting one of the scenes she was in, the director played it back to show me and it looked incredible."

The Glasgow father went on to discuss Isla's "over the moon" reaction and the plans they had to see the movie upon release:

"Isla was over the moon. It was emotional watching them together. It’s just a pity we’re not getting to see the movie. We had to keep it all a secret for so long. We kept saying to Isla 'you’re going to be on the big screen. We had plans to go to the cinema when the film was released and she wanted her friends to see her in the movie."

Addressing how he and his daughter reacted to the cancellation, Neil revealed she was "really upset" but "she'll never forget." The young girl also got the chance to meet Batgirl star Leslie Grace, and was sad to discover she won't get to meet her again at the premiere:

"She was upset, really upset about it being scrapped, but she’s got the memories she’ll never forget. She also said 'I’ll never see Leslie Grace again' as she was hoping to go to the premiere and meet with her again. I was absolutely gutted too. I was expecting to see my wee girl on the screen in a real movie. Isla was actually away on holiday when I heard the news and I waited until she came back to tell her face-to-face."

The Real Impact of Batgirl's Cancellation

These heartbreaking comments from this Glasgow father only further emphasize the impact that the cancellation of Batgirl has had. Not only will fans never get to react to the DC flick for themselves, but the cast and crew will never get to truly enjoy the fruits of their hard labor.

Warner Bros. attempted to make amends by holding "funeral screenings" in Burbank, California for those involved including the cast, crew, and executives. However, this notably omits the many Glasgow locals who participated in the production, played extra roles, and had the flick impact their lives for months.

The story of Isla Neil only further conveys the passion, kindness, and generosity of directors Billal Fallah and Adil El Arbi. Their attempts to include this young Batgirl fan in the movie will undoubtedly stay with her for life, whether Warner Bros. delivers on its promises to release the images of her or not.

Glasgow will double as Gotham once again when it hits theaters on The Flash on June 23, 2023.