DC FanDome brought news from a plethora of upcoming DC films and TV series. From character reveals for The Suicide Squad to a brand new trailer for The Batman, the live online event absolutely delivered on its promise of bringing new and exciting information about the future of DC. But one panel stood above them all, that being the much anticipated panel for Zack Snyder's Justice League.

The trailer unfortunately leaked prior to the beginning of DC FanDome, sending the fan base into a frenzy to get a first proper glimpse at the upcoming Snyder Cut. That didn't leave the panel itself without any new details, however, with Snyder stating that the new cut will be split into four parts, each an hour in length.

With the trailer now officially out in the open, it's time to break it down and go over all the hidden details, references and easter eggs you may have missed...

Throughout the trailer, a solemn, grim cover of Leonard Cohen's "Hallelujah" plays. This creates a juxtaposition between the song's joyous message in order to emphasize the darker tone that Snyder is known for.

Simultaneously, the celebratory nature of the song reflects how the Snyder Cut has finally become a reality, and this trailer solidifies just that. Hallelujah. 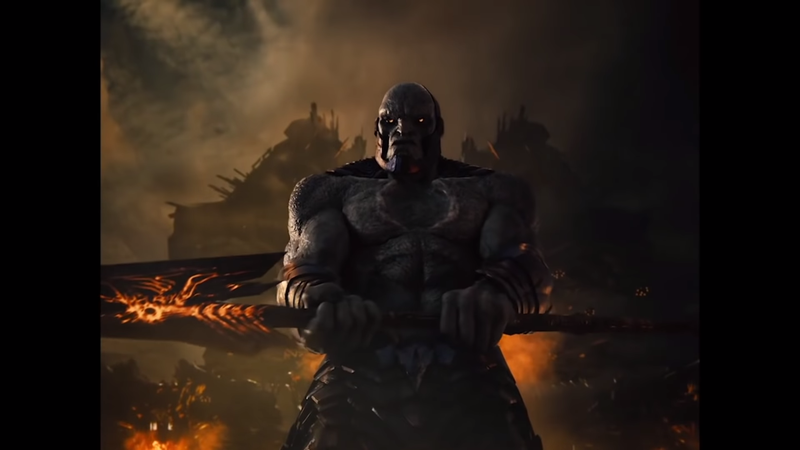 The trailer opens with a powerful opening shot: Darkseid. He's seen here with a completely new design, wearing his trademark helmet and bearing the Omega symbol scarred on his chest. Behind him are multiple ships from the Apokolips fleet, with smoke and fire billowing from their undersides. The Lord of Apokolips also bears a mace-like weapon, which he brings over his head and plunges it down towards the camera.

This shot is likely from a deleted scene of a fight between Ares and Darkseid, showing him triumph over the God of War here. Darkseid is being portrayed by Ray Porter, who provided the motion capture and voices him.

Darkseid has only ever been teased in the DCEU, with the Omega symbol being carved into the ground during the Knightmare sequence in Batman v Superman. Originally, Darkseid was intended for a Justice League Part 2, with Steppenwolf being the precursor to his arrival in the first part. Because of the Snyder Cut, Darkseid has been brought forward to be featured in Justice League in some capacity. 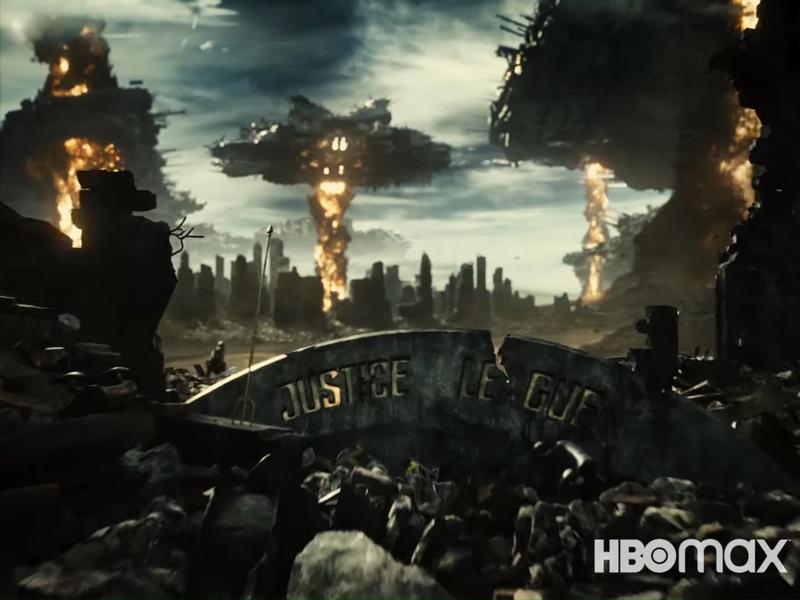 We next see an alternate shot of Superman's death from Batman v Superman at the hands of Doomsday. This is followed by a premonition of an alternate future, where a wrecked building with the text 'Justice League' is written on a part of the rubble. Darkseid's forces can be seen in the background, with explosive flames and smoke being released from them. Perhaps most interestingly in this brief scene, a card with a Joker face flies into shot, which is no doubt a nod to the DCEU's own version of the Joker. 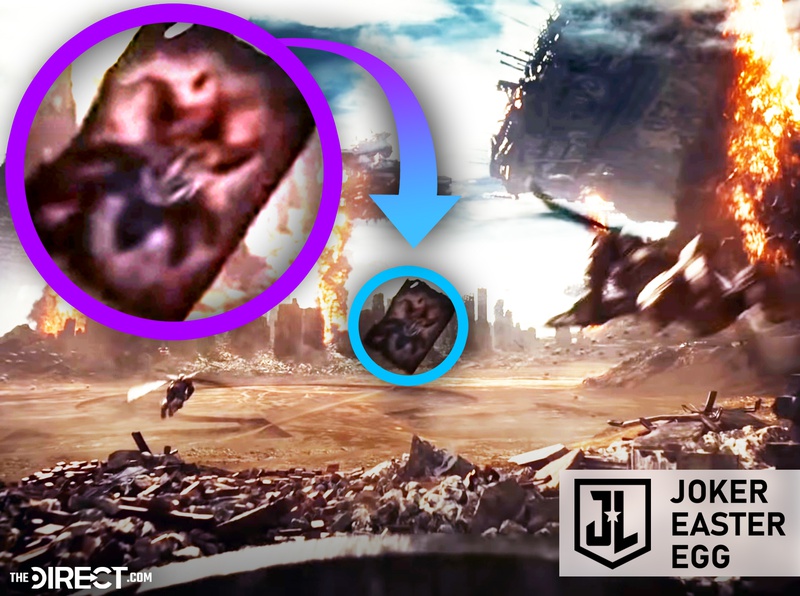 Also notable is the presence of Aquaman's trident from his titular film. Parademons inspect the wreckage, and fly off back towards the fleet.

After some brief logos, Diana Prince walks into some ancient Greek ruins, possibly on Themyscira. A single arrow lies ahead of her, stuck in the ground. Smoke rises from the arrow, indicating that it was recently shot. This connects to the initial sneak peak for the miniseries, reinforcing that Diana is on a journey to find out more about Darkseid. 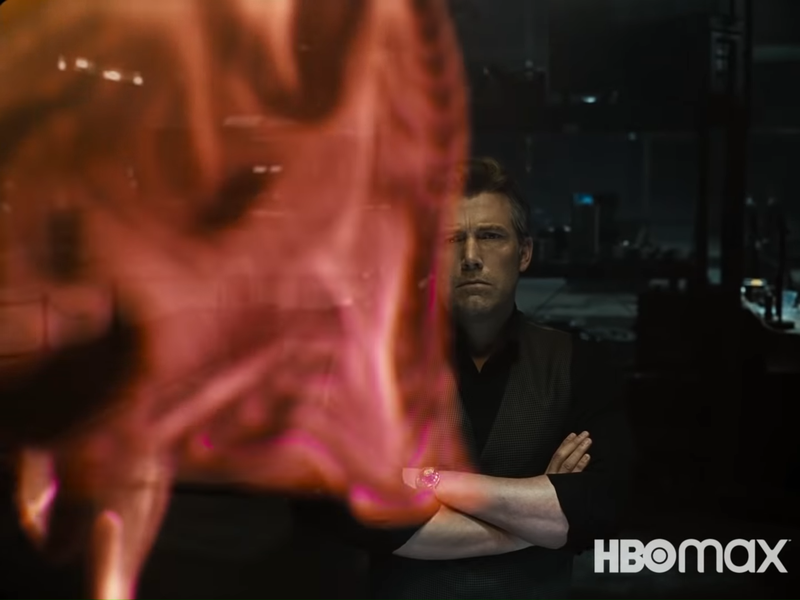 Bruce Wayne watches footage of Superman, being projected on a holographic display in the Batcave. Aquaman is then seen in his small fishing village, emerging from his house and taking his shirt off at the end of a pier as waves crash around him. Victor Stone is then seen leaping over an opposing player during a football match. The crowd cheers. 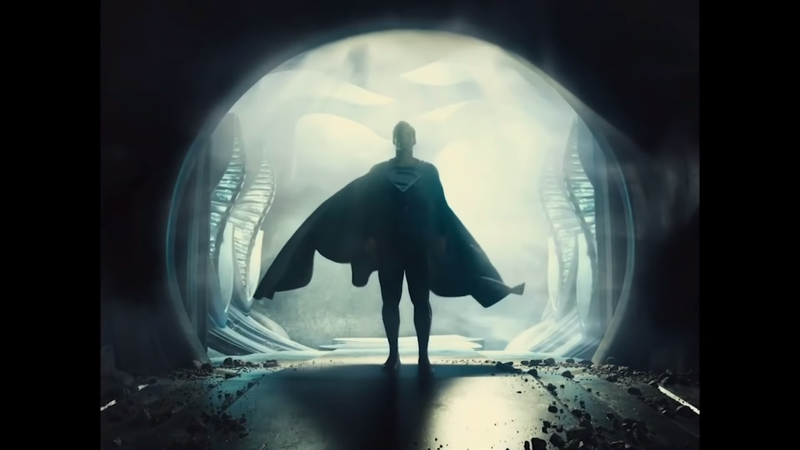 Superman appears through an entrance in the Kryptonian ship, now donned in a black and silver suit. This suit was teased in a brief clip shared by Snyder previously, but the new trailer shows it off in all its glory. This contrasts the theatrical release of Justice League, where Superman returns in his original red and blue spandex.

This new black suit is a reference to the costume that Superman wears upon his revival in the comics, although the Snyder Cut version is fitted with a black cape and is notably missing a mullet. 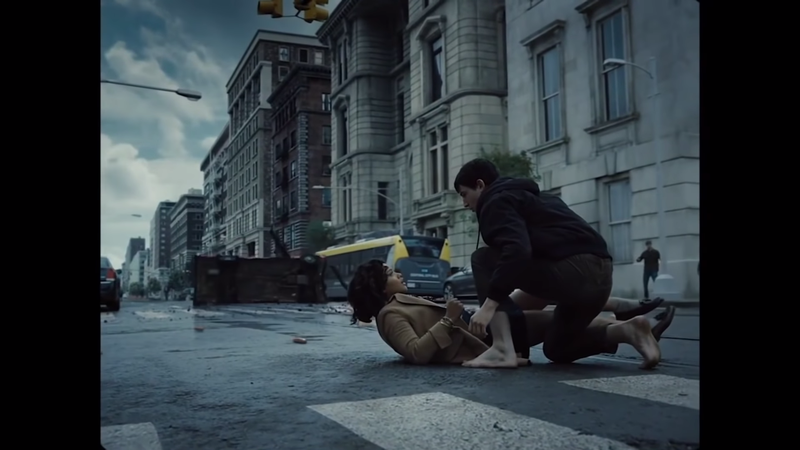 Wonder Woman is seen suited up, greeting some young schoolgirls in a dilapidated building. Barry Allen harnesses the Speedforce to burst through the window of what appears to be a nursery. As the glass shatters, a car is seen flipping over while its driver is thrown out. The car topples, but Barry is able to save the driver in time, who is revealed to be his love interest Iris West. The car, naturally, explodes in classic Snyder fashion. Kiersey Clemons portrays Iris, and was completely removed from the theatrical cut. This could indicate that the film will sow the seeds for a romance between Barry and Iris.

It is unclear whether Clemons will reprise the role in the upcoming Flash solo film, due to the director change likely shifting focus away from this storyline. Barry is also not wearing shoes in this moment, either because they have been burnt off due to the sheer speed, or due to a poor wardrobe malfunction. 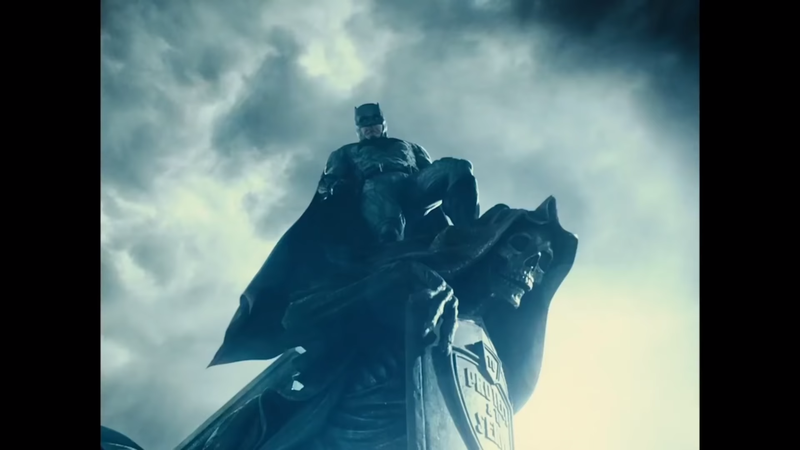 Next is a brief clip of Cyborg digging up a grave frantically. This could be the original scene for retrieving Superman's body. Alternatively, Victor may be visting the graves of his parents.

Batman is then seen perched on a statue that bears a resemblance to the Grim Reaper, being a hooded, decrepid skeleton. A sign is fixed to the statue, with the text 'To Protect & To Serve' written on it. This could be a statue on the GCPD building, although the statue itself is admittedly bleak for a police office.

Lois Lane is then visited by Martha Kent, likely to connect over their collective loss of Clark. But looks can be deceiving. According to a storyboard, Martha would have left the apartment only to transform into Martian Manhunter. This would be the first ever appearance of J'onn Jonnz in the DCEU. The character would then morph into Calvin Swanwick played by Harry Lennix, who was also teased as being a disguise for the character.

Aquaman's trident and armor lie at his feet, as water rapidly flows over them. A crab slowly walks in the background, indicating that this takes place in Atlantis. Willem Dafoe's Vulko was originally intended to appear in the film, so there is a good chance that the character could make his appearance here. This is followed by a shot of Arthur leaving his conversation with Mera, into the ocean depths. Mera looks off at him, with a worried expression. 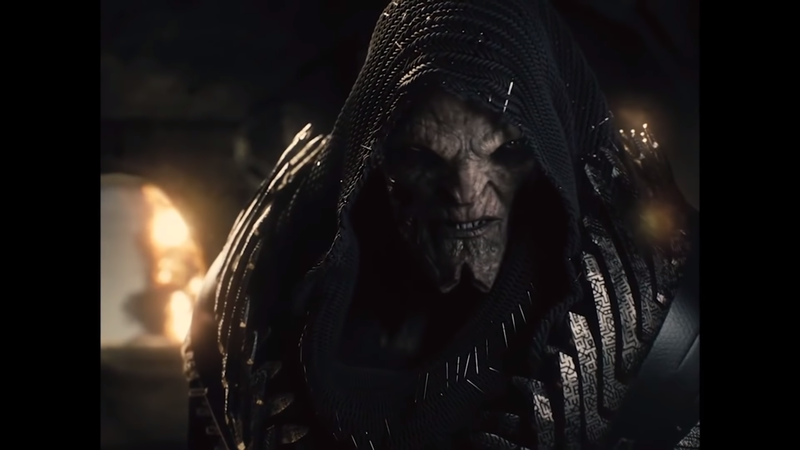 Another shot of Darkseid seen in a previous teaser is shown, showing the villain in front of his army of ships. Another member of Darkseid's army is also shown, this being a hooded DeSaad. The character will be portrayed by Peter Guinness, and is being put back in the Snyder Cut to act as Darkseid's loyal servant.

Cyborg is then seen, struggling to control his new body as Flash watches on helplessly. Another shot shows Kal-El floating ominously above Metropolis, as Lois Lane looks towards him fearfully. 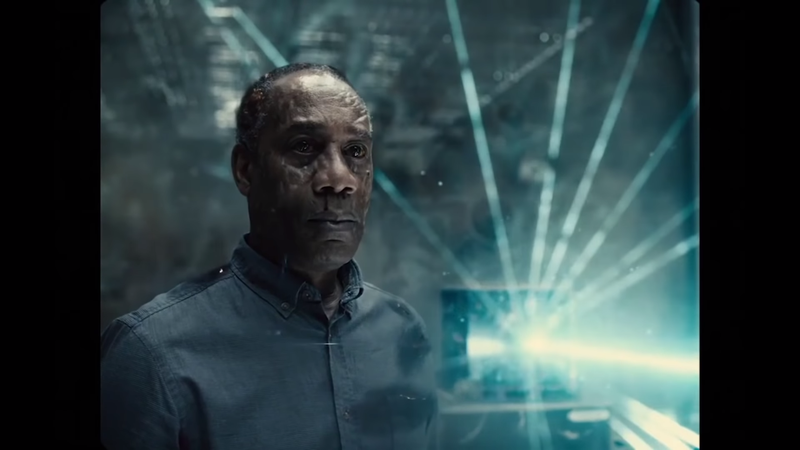 Silas Stone then presses a button, firing a piercing laser into a Motherbox. Stone is then seen in the containment unit with the Motherbox, his body disintegrating as power surges around him. Victor cries after him as his father perishes. The scene is eerily similar to one featured in another Zack Snyder film, Watchmen, where Jon Osterman is obliterated in an Intrinsic Field Generator.

Connie Nielsen's Queen Hippolyta runs past a group of Amazons, as Steppenwolf arrives through a boom tube. The villain's design has been retooled for the film, looking much more imposing than his theatrical version. A familiar shot of Wonder Woman, Aquaman and Cyborg is seen, though it has been color corrected to fit the rest of the tone for the Snyder Cut. 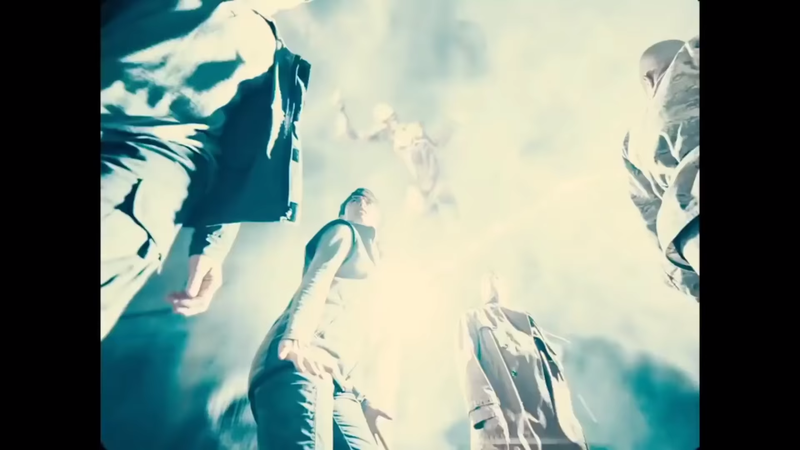 A blink and you'll miss it shot of the Flash is shown, zipping around quickly above a group of people as lightning surrounds them. Zack Snyder teased in his panel that Flash would be performing certain abilities that had never been seen before, so this could be the first indication of this in action.

The Batmobile is then shown, tearing up Parademons as it races by. Superman, again outfitted in black, and Steppenwolf collide, as the music takes a dramatic pause. 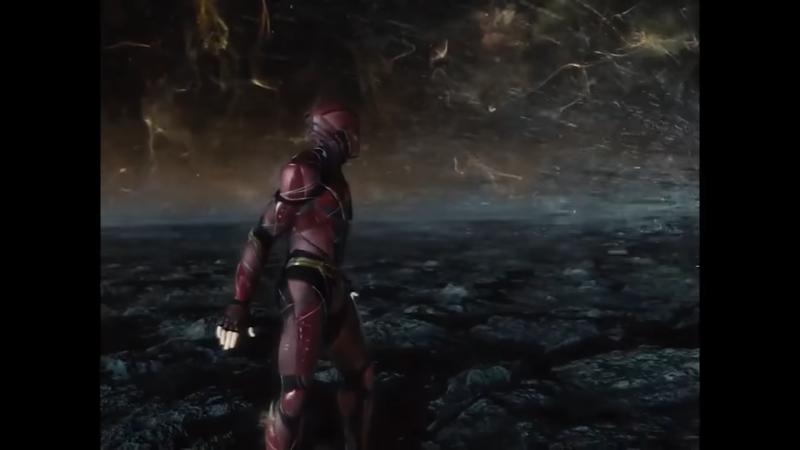 The music swells, returning on Batman blocking incoming blasts from Parademons. The Flash is then seen, surrounded by a flurry of smoke, particles and lightning. In contrast, Barry is unmoving, besides him vibrating at an erratic frequency. This is another hint at Flash's unseen potential, possibly providing a glimpse at how this version of Barry Allen will access and interact with the Speedforce.

Lois is then shown at the farm in Smallville, looking off to see Clark in the corn fields. Clark, Martha and Lois all embrace, finally reunited. 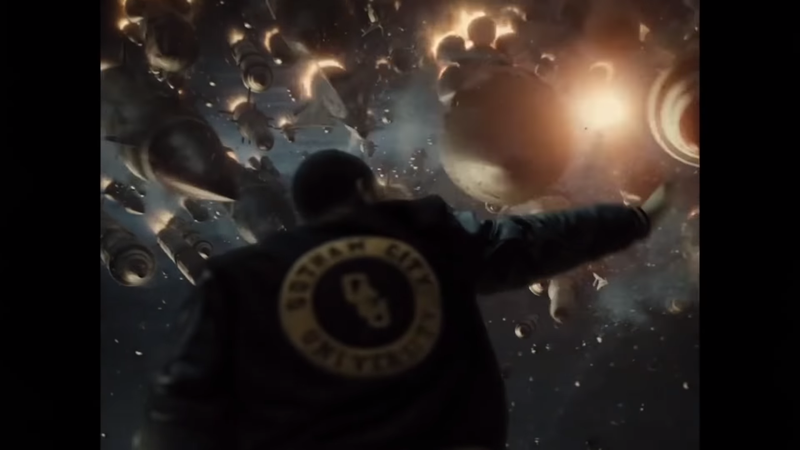 A quick shot of an individual wearing a Gotham City University jacket is shown, who then redirects a barrage of missiles. Although it is unclear who this character is, the jacket and the ability being shown off likely points to Cyborg. 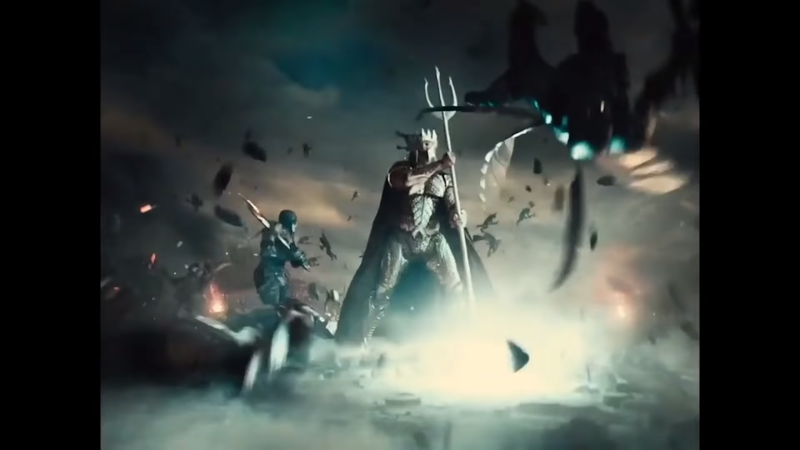 A brief flashback scene is then shown of King Atlan of Atlantis fending off against an army of Parademons with his trident, the same one again seen in Aquaman. Cyborg is then seen, hurtling into an exploding car to protect some police officers. This will likely precede Victor's line, "You should probably move", which was previously seen in initial trailers for the theatrical version of the film. 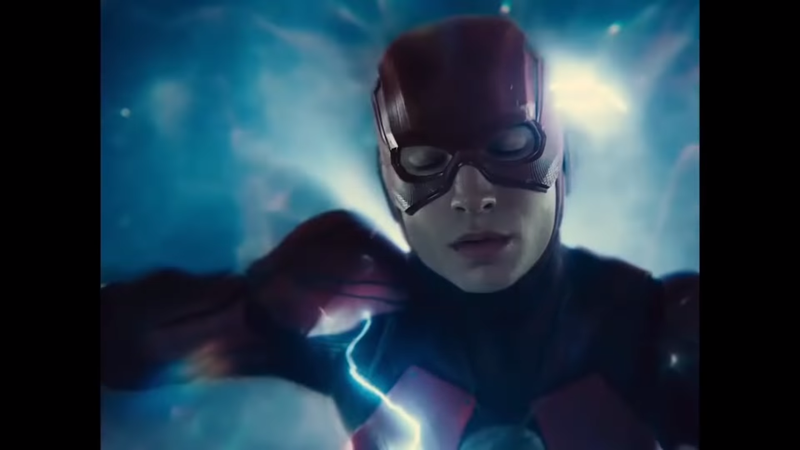 The third and final tease for The Flash's capabilities are then shown, with Barry tapping into and utilizing the Speedforce. Power coarses through him, shown through massive energy surges coming from his feet with each step. It is unknown what this newfound power will allow Flash to do, but whatever it is, it will be fast. 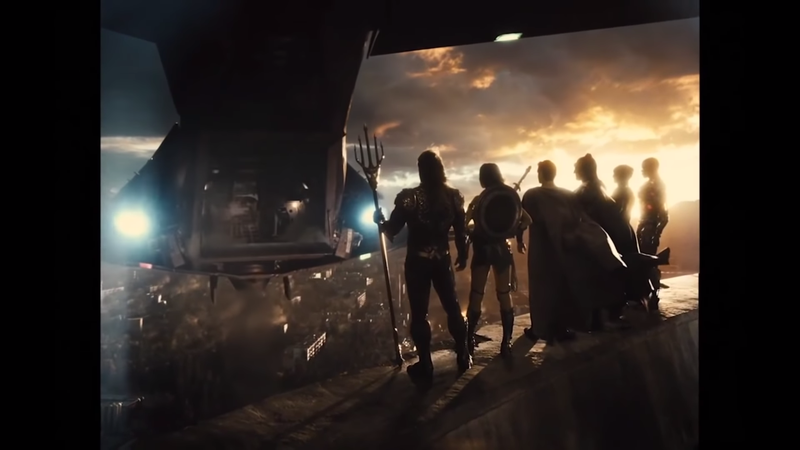 The Justice League are then shown, standing triumphant following a victory against Steppenwolf. This image differs from the one seen in the theatrical cut, firstly in the fact that Superman is, again, coated in black clothing and secondly in that the Flying Fox is coming to pick the team up.

After a quick title card, the trailer ends with a conversation between the League about the history and imminent threat of Steppenwolf and Darkseid. Barry explains that "This guy's probably fought hundreds of thousands of other superbeings on the other planets he's destroyed, right? And we have to assume he's won." Bruce remarks back "I don't care how many demons he's fought in how many hells. He's never fought us. Not us, united."

The trailer is jam-packed with interesting details about what the new cut of Justice League will explore. Cyborg will also be receiving much more development, going into his origin as a college football player as well as the loss of his father. The Flash is also receiving a surprising amount of new content, in the form of a love interest in Iris West and a greater exploration of his powers and the Speedforce.

A good portion of the film will likely provide more background on Steppenwolf, Darkseid, DeSaad and the forces of Apokolips so that the Justice League know what they are up against. Regardless of this information though, the team are determined to give it their all in their greatest battle yet.

How all of this will play out, and how the miniseries will compare to the theatrical cut of Justice League, will be revealed when Zack Snyder's Justice League premieres on HBO Max in 2021.