Man of Steel's release in 2013 served as a launchpad for the DCEU, attempting to originate an interconnected superhero universe that could rival the MCU. Despite a promising start, the subsequent movies in the DCEU umbrella experienced a mixed bag of reviews from fans and critics.

The much-anticipated Batman V Superman: Dawn of Justice critically failed to live up to the expectations in 2016. Later that year, the meddling of studio executives led to the downfall of David Ayer's Suicide Squad despite a great performance from the star-studded cast. Ultimately, 2017's Justice League proved to be the final nail in the coffin as Zack Snyder's departure combined with Joss Whedon's multitude of plot-changing reshoots led to a disappointing film.

The rocky start of the DCEU led Warner Bros. to press the reset button. The next wave of films (Aquaman, Shazam, Birds of Prey) embraced the standalone nature, though it subtly connects to the larger DCEU. On top of that, 2019's Joker made a successful debut as the first Elseworlds-type story that shifted away from the DCEU's interconnected storytelling, garnering multiple Oscars (along with other major movie awards) in the process.

It's unclear how 2021's The Batman will fit in the ongoing narrative of the DCEU, with available info about the film strongly suggesting that it is set in an alternate universe. The rumored return of Michael Keaton's Batman in The Flash even made things more complicated in the eyes of fans. Although it isn't expected to entirely affect the DCEU, the impending release of Zack Snyder's Justice League presents a lot of interesting possibilities for the franchise. It is possible that the successful release of the Snyder Cut could potentially continue the director's plans for a Justice League trilogy, but the main difference is the idea of it being set in another universe.

There is a growing belief that DC's next strategy is to embrace the idea of multiple realities and versions of their characters. There's a sense in which this has been foreshadowed through the official announcement of DC FanDome, emphasizing the importance of DC's Multiverse. At this point, there has been a slew of evidence that the DCEU is leaning towards opening up the multiverse to shy away from its MCU counterpart, and it starts with Ezra Miller’s cameo in Arrowverse’s Crisis on Infinite Earths. 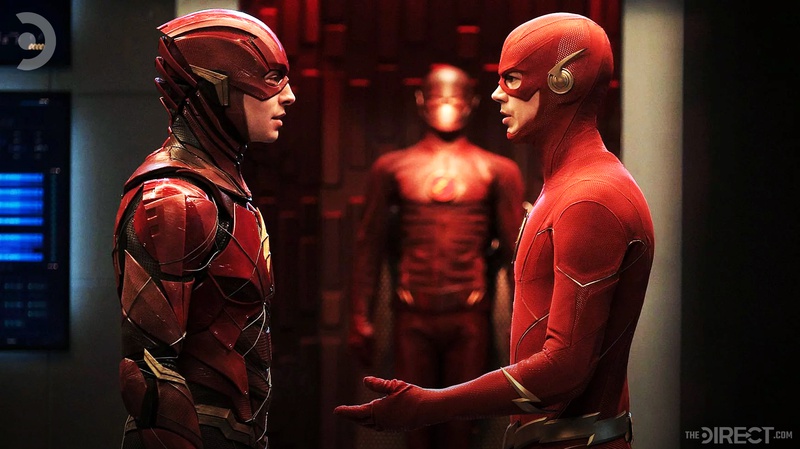 Last year, CW's Crisis On Infinite Earths delivered an ambitious crossover like never before, with the heroes of the Arrowverse joining forces against the Anti-Monitor to save the multiverse. On top of the universe-shattering stakes, the 5-part crossover also delivered surprise cameos from past and current live-action iterations of DC characters, strongly establishing that every live-action DC property (movie and TV) exists across multiple Earths. And yet, the biggest surprise of Crisis turned out to be the cameo of Ezra Miller's Flash during Part 4 of the crossover.

During the iconic scene, Miller's Flash finally met Grant Gustin's version of the Scarlet Speedster, an exchange that became the most talked-about moment of the crossover epic. Miller's cameo confirmed that the DCEU is part of the larger multiverse that was established in the Arrowverse shows, demonstrating that DC is taking a unique approach by using its TV division to plant seeds for the future of the franchise.

Interestingly, the famous cameo of Miller was revealed to be a (special) last-minute addition. Having finished production for Crisis, Arrowverse creator Marc Guggenheim shared that Warner Bros. head Peter Roth specifically asked if Miller could be featured in the crossover. This request suggests that the inclusion of Miller in Crisis is not purely based on fan service, but rather that it is part of a bigger plan moving forward.

Miller's cameo not only provided an exciting moment, but also teased what the hero has been up to after the events of Justice League. Based on the quick conversation between the two speedsters, Miller's Barry Allen is still hanging out with Ray Fisher's Cyborg, and it seems that the two heroes could be exploring the multiverse concept themselves. The confused look of Miller's Flash suggests that he is not even aware that alternate worlds exist. This experience could be further explored in his upcoming solo film.

The cameo also revealed that Miller's Scarlet Speedster still doesn't go by his official "Flash" moniker, thus paving the way for the DCEU film to acknowledge the events of the Crisis crossover. That said, this will mark the first time that the events that transpired in the TV division will finally be part of the canon for the movies. One way to firmly establish the connection is by showing Miller's perspective of the Crisis event, which would lead to Grant Gustin's Flash to cameo in the DCEU film.

In many ways, Miller's involvement in Arrowverse's Crisis on Infinite Earths provided an opportunity for the DCEU to explore an unprecedented avenue of storytelling through the multiverse, and the good news is that that's only the tip of the iceberg. 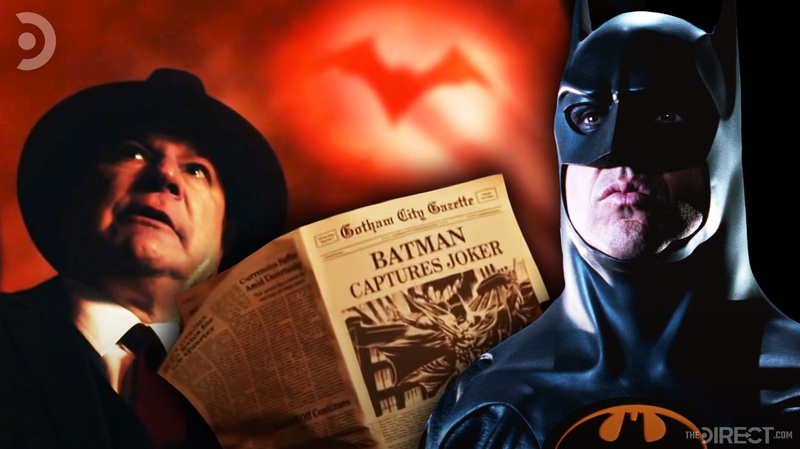 Aside from Miller's much-talked-about cameo, CW's Crisis had a slew of cameos which featured DC's past and current live-action properties. These include the special appearances from characters in DC Universe's Titans and Doom Patrol, Tom Welling's Superman from Smallville, Brandon Routh's Superman from Superman Returns, and a surprise cameo of Tom Ellis' Lucifer. However, there was a glaring cameo that may have shed some light on Michael Keaton's potential return to the DCEU as the Dark Knight.

During the crossover's opening moments, a montage of alternate Earths was showcased which includes an appearance from reporter Alexander Knox (Robert Wuhl) from Tim Burton's Batman. Set in Earth-89 (which is an obvious nod to the year the film premiered), Knox was seen holding a Gotham Gazette newspaper with the headline "Batman Captures Joker" before the scene featured a glimpse of the iconic Bat-Signal. This suggests that Keaton's Caped Crusader went against Jack Nicholson's Joker for the second time around at a later point in their universe.

The scene can be viewed as only a fun Easter Egg for diehard Batman fans, but evidence suggests that it is more than that. The internet-stopping reveal of Keaton returning as Batman for the DCEU suggests that Wuhl's cameo in Crisis was also a set-up for the actor's return. Has DCEU's multiverse plan really been in the works all this time? 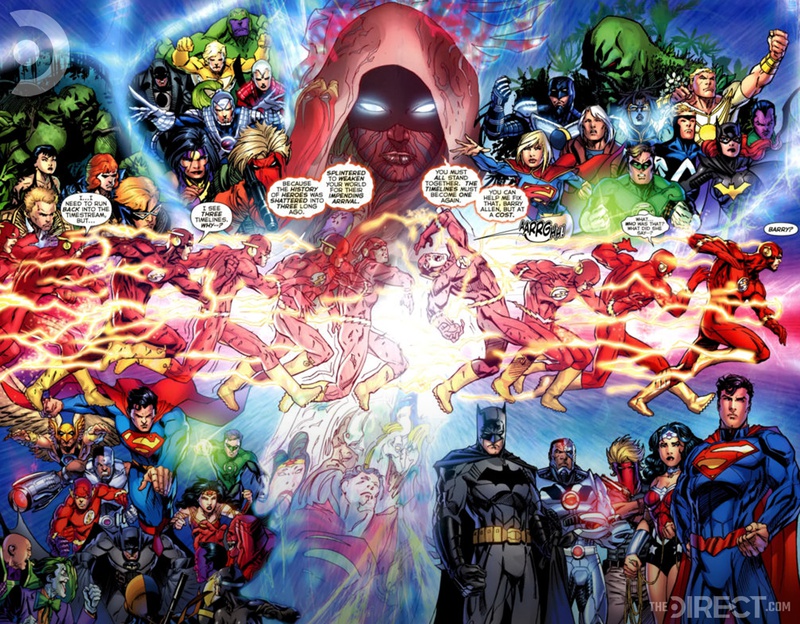 Are the days of uncertainty for the DCEU coming to an end? In the past weeks, the franchise made headlines that kicked off with the official announcement of Zack Snyder's Justice League. After that, the DCEU has been the subject of a wave of rumors and speculations which could lead at an ultimate payoff during this August's DC FanDome. With a potential plan in place, it's safe to say that the DCEU is shifting to a brand new direction.

One major takeaway from DC FanDome's announcement was the emphasis on the idea of the multiverse. While the multiverse has been well-explored in the Arrowverse side of things, the DCEU is looking to introduce the concept to a larger audience with 2022's The Flash leading the way. Set to tackle the Flashpoint Paradox storyline from the comics, The Flash will look to reinvent the DCEU while also bringing along the multiverse concept in the process.

Incorporating the Flashpoint storyline not only elevates the arc of Miller's Flash in the DCEU but could also provide a blank canvas for future stories moving forward. In the comics, the New 52 was born from the remnants of the Flashpoint Paradox storyline. The events of Justice League: The Flashpoint Paradox managed to launch the DC Animated Universe, ultimately leading to an epic conclusion in the form of Justice League Dark: Apokolips War. However, due to Apokolips War's tragic ending, the film ended with Barry purposely causing another Flashpoint to change the world again for the better. In CW's The Flash, the changes made were purely character-driven but it helped redefine Grant Gustin's version of the character and the Arrowverse in general. It's clear that the presence of Flashpoint in the DCEU will reimagine the franchise in more ways than one.

The multiverse approach can help explain the various continuities that are present in DC's slate of films while also giving more creative freedom to the crew behind-the-scenes. By the time The Flash ends, the presence of the multiverse should be widely acknowledged by most fans. The interconnected nature of storytelling will continue, but the multiverse paves the way for launching more DC films that take a bolder approach in terms of tone (noir approach on The Batman) and film rating (Rated R rating of 2019's Joker).

The multiverse also offers an opportunity to revisit previous live-action iterations of DC heroes, catching up on their adventures after their film's events. After Keaton's Batman is done helping out the Flash, his eventual return could potentially set up the long-rumored Batman Beyond storyline. More so, Brandon Routh's Superman, who was heavily featured in CW's Crisis, now has the opportunity to return on the big screen to help explore the Kingdom Come storyline centered on the Man of Steel. These are just potential storylines that can further be explored in the DCEU.

With the multiverse in tow, it offers a chance for unexplored storylines from the vast library of DC Comics to take center stage while also treading new ground for the franchise.