Ever since the "Snyder Cut" of 2017's Justice League was officially announced back in May for a 2021 release on HBO Max, fans have been flooded with hints and reveals about what DCU fans can expect and what Snyder has up his sleeve.

That flow of information about Snyder's finally-realized vision of Justice League shows no signs of slowing down anytime soon. In the past few days, fans have heard Henry Cavill's take on the Snyder Cut, and a fan shared a translation of the mural from the film's recent teaser trailer. If that wasn't all, Zack Snyder is speaking out himself about his version of Justice League.

Earlier today on a Vero post, a fan asked Zack Snyder about what fans can expect from the Snyder Cut in regard to surprises. The fan expressed concern about the sheer volume of news and reveals that have come with the Snyder Cut's announcement. 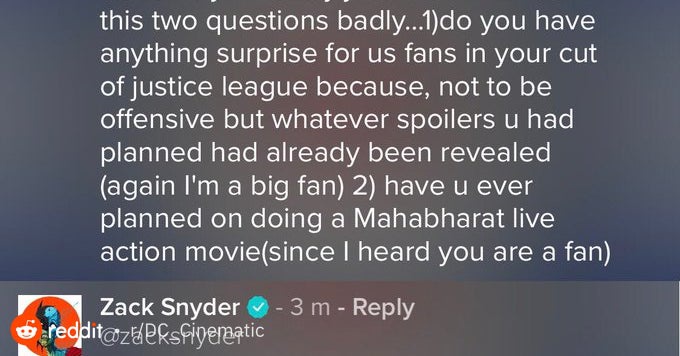 Snyder confirmed what fans had hoped when he replied... "You have only seen tip of the iceberg."

Zack Snyder has been just as passionate as the fans about this project, and some may have feared he was revealing too much with his many social media postings of the behind-the-scenes images from his cut. However, Snyder's response to this fan question inspires confidence that he's saving the best for the release.

The possibility his cut could be turned into a series of TV episodes for HBO Max would be the best format for Snyder to surprise fans and spoilers. Fortunately, we shouldn't have to wait long to find out since Snyder will be attending and sharing more about the Snyder Cut at the upcoming virtual DC FanDome this August.